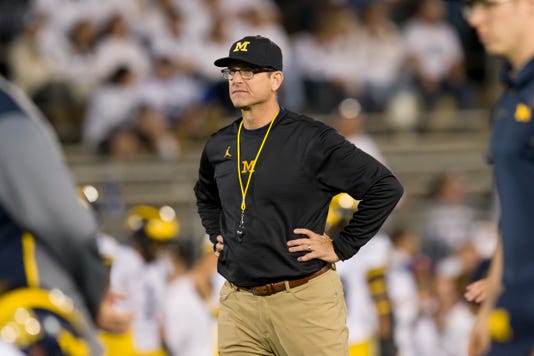 Jim Harbaugh says the expectations at Michigan are "heightened" more than at any other places he's worked.(Photo: David Guralnick, Detroit News)

When Michigan and Nebraska open Big Ten play on Saturday, both teams will be coached by men who were quarterbacks at their respective schools — Jim Harbaugh at Michigan and Scott Frost at Nebraska.

They will face each other at noon Saturday at Michigan Stadium.

Harbaugh, during the Big Ten call on Tuesday, was asked by a Nebraska reporter about his experiences both good and bad coaching his alma mater. Harbaugh stuck to the positives.

“It’s been a great thrill,” Harbaugh said on the conference call. “One of the great thrills of my life to be here. Love it. Love coaching, love football, love coaching at my alma mater. Been wonderful.”

He was asked if because he’s so well known by the university community if there’s more understanding when there’s a loss.

“They’ve been playing football here for 139 years,” Harbaugh said. “They’ve seen a lot of tremendous football. That’s the expectation. You pour your heart and soul into meeting that expectation.”

Harbaugh has been a head coach at San Diego, Stanford and the 49ers, but coaching Michigan has different meaning.

“I would say it is (different),” Harbaugh said. “It’s heightened, yes.”