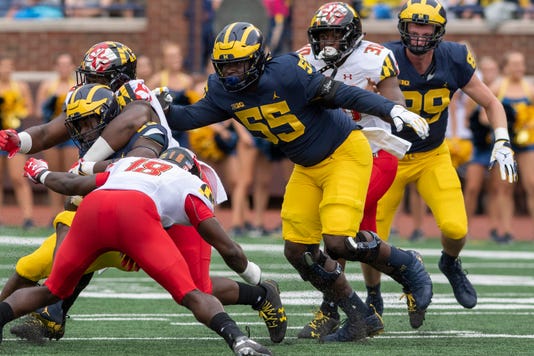 It was curious when Michigan sophomore offensive tackle James Hudson wasn’t in the game last Saturday when starting right tackle Juwann Bushell-Beatty had to leave because of injury.

Michigan coach Jim Harbaugh on Monday said Hudson suffered a dislocated finger in a previous game and Andrew Stueber had moved ahead of him “on the depth chart for this week.”

But by Monday night, it was confirmed by Michigan that Hudson, a sophomore out of Toledo Central Catholic, has decided to transfer.

“James Hudson has decided to leave the program and pursue a transfer,” UM football spokesman Dave Ablauf said in a text Monday night.

Hudson is the second player to transfer in the past week from Michigan. Redshirt freshman linebacker Drew Singleton, it was revealed last week, decided to transfer.

Now it appears Stueber is the backup to Bushell-Beatty, whose health status was not updated on Monday by Harbaugh.

Before the season, Harbaugh said he was certain the position move was the right fit for Hudson.

"I've got really high hopes for James,” Harbaugh said in August. “I have very little doubt that the right position for him is offensive tackle."