The journey since has been challenging but rewarding, and now it is on a significant upswing in coach Jim Harbaugh’s fourth season.

Michigan fifth-year senior Jared Wangler said his class understands what bottom feels like and they're enjoying this ride. The Detroit News 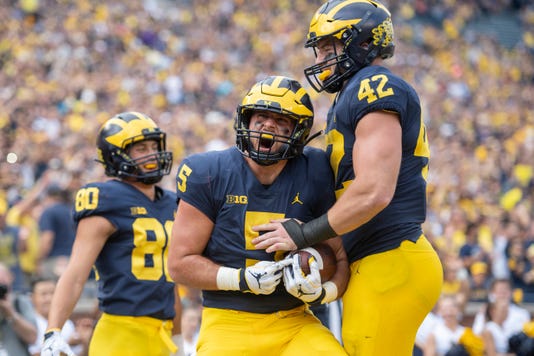 During his career Jared Wangler (5) has seen Michigan go from no bowl game to a shot at the College Football Playoff.(Photo: David Guralnick, Detroit News)

It was ugly, a 5-7 season in 2014 and no bowl game, a change in the athletic department leadership, their coach, Brady Hoke, was fired, and it was unclear who would be the next coach.

The journey since has been challenging but rewarding, and now it is on a significant upswing in coach Jim Harbaugh’s fourth season. The Wolverines are ranked No. 4 in the College Football Playoff rankings and have won nine straight as they prepare to face Indiana in the final home game of the season at Michigan Stadium on Saturday.

More: View from the other side: Michigan vs. Indiana

“I don’t know what to expect,” senior receiver Grant Perry said of the emotions he might experience when the seniors are honored before the game and when he takes that final walk up the tunnel in his uniform. “I talked to some older guys and they’re like, ‘Yeah, you’ll probably cry.’ We’ll see. We’ll see if the waterworks happen.”

The fifth-year players who remained with the team could not have known what to expect at this point. Defensive lineman Lawrence Marshall had an idea that something special might be brewing this year when he considered the talent he saw on offense and defense.

Michigan defensive lineman Lawrence Marshall on his journey at Michigan. The Detroit News

That’s a far cry from where this group was after that 2014 season.

“My freshman year, we didn’t go to a bowl game,” Marshall said. “It was like, 'Mannnnn.' Now we’ve got a chance to go to the Big Ten championship. We came a long way. We sure came a long way.

“Not going to a bowl game, that’s for sure rock bottom.”

And what is this now, with Michigan (9-1, 7-0 Big Ten) in the national playoff conversation?

Fullback Jared Wangler was on that team, as well. The fifth-year seniors are well-versed in what it feels like to have full fan support and have seen how things fall off when the team isn’t winning and there’s no bowl game.

Michigan fifth-year senior Joe Hewlett on being 5-7 his freshman year and the ups and downs experienced until this season. The Detroit News

That roller coaster ride has played a role in how the older players have approached this season.

“I think that’s one thing this team has done a job of is to keep our heads forward and not really listen to the outside noise, because we know how quickly that narrative can switch on us,” Wangler said.

“We’re really just focusing on, each game at a time and going from there. It feels great. You definitely know what the bottom feels like and you’re getting a taste of what the top feels like. You really want to keep that momentum going and do something special that we’ve never done here and none of our teammates have done here. The goals are ahead of us and that’s what we’re working toward.”

The Wolverines were in a similar situation in 2016, a top-rated team and in the national playoff talk. But a late-season stumble knocked them out.

This time around, things feel different.

“Maybe it’s that a lot of us had been through that 2016 year where we were all at the top, and everything that everyone’s telling us, ‘national championship,’” Wangler said. “But we didn’t achieve it. This year, people are saying it, but we’re really focused on winning the next game, winning the game after that. Just taking it bit by bit and winning those games.”

The Wolverines got the proverbial wake-up call in the season opener at Notre Dame, a seven-point loss after the Wolverines were quickly down 14-0 early.

“A lot of teams could pack it in and start blaming each other,” Wangler said. “I think you have to look at a lot of the team leaders, you have to look at the coaching. The coaches did a phenomenal job of getting this thing turned around. There wasn’t anyone feeling sorry for themselves. At that point we had lost four straight games (from the end of the 2017 season). A lot of us could have looked at the coaches and not trusted them then or looked at each other and not trusted in one another.

“But that speaks volumes about the team and that may be why you see us at 9-1 now because guys trust each other and that’s a huge part of our success.”

Joe Hewlett, also a fifth-year senior and, like Wangler, the son of a Michigan football legacy, said the atmosphere these days is entirely different than their freshman year.

“It really has changed a lot,” Hewlett said. “The culture around here has definitely shifted with Coach, and he’s made changes with coaches and players. Guys expect a lot out of each other. I think that’s definitely one thing. We come in every day, everyone has an expectation that you’re going to be professional and you’re gonna go about your business and do your job.”

And with that has come winning, and with winning has come a general sense of euphoria on the campus, not to mention among the players.

“In our Monday meeting after a win, you walk around and you feel good about yourself,” Hewlett said. “Your classmates, they’ll chat you up about the game, what was it like, and if you made a good play on Saturday they’ll give you a pat on the back, stuff like that. So you can definitely feel it. Ann Arbor is way better when we’re winning football games.

“Winning helps everything. That’s for sure.”

This will be their final home game wearing the Michigan uniform and winged helmet, and while that could be a distraction, this has been a team that prides itself on its focus.

"We're enjoying every practice, every meeting we have. Maintaining that focus,” Hewlett said. “We know there's big games down the stretch, but there's none bigger than the one on Saturday."

But before that game, maybe they all will experience some, as Perry said, waterworks.

“I don’t even know if I’m ready for it,” Wangler said. “It’ll be a special moment, something a lot of us will never forget.”