He will join Ryan Day's staff as co-defensive coordinator, according to the Columbus Dispatch. He will share those duties with 49ers defensive backs coach Jeff Hafley. 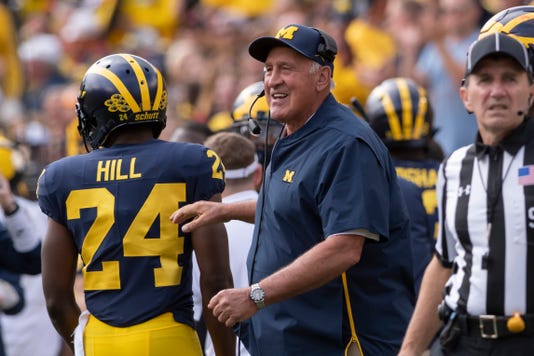 There has been no comment from Michigan coach Jim Harbaugh or a program spokesman.

"I love the idea of having two coordinators on defense,” Day said in a statement released by Ohio State. “I like having a diversity of opinion, but even more I like the expertise and experience that Jeff has in the secondary coupled with the expertise that Greg brings to the front seven.

“Jeff is a rising star and highly regarded as one of the best secondary coaches in the country. His NFL knowledge coaching the secondary is only going to enhance and improve what has become a marquee area for the Buckeyes. Greg is a terrific coach. His experience as a coordinator and his knowledge of the Big Ten is extremely important to me.

“These are two outstanding coaches and they will provide stability, wisdom and a fundamental approach to everything they teach. They will add to our culture while proving to be excellent coaches and mentors for the young men in our program.”

Mattison and Day overlapped on Florida’s staff. Mattison was there from 2005-2007 and Day was graduate assistant in 2006.

Harbaugh apparently called each of the lineman earlier today ahead of the news of Mattison’s departure broke.

Still, there was a ripple of shock waves among former players.

Mattison’s contract at Michigan was expiring this week. He made $525,000 each of the last two seasons. He returned to Michigan in 2011 as then-head coach Brady Hoke’s defensive coordinator, a role he held four seasons. When Harbaugh took over as head coach, Mattison became defensive line coach and took a $200,000 pay cut.

Mattison distinguished himself at Michigan as a tireless recruiter and a coach who developed NFL-caliber linemen.

“Coach Mattison wasn’t only a great coach, he also molded young 18-year-old kids into men,” Ryan Glasgow, now with the Cincinnati Bengals, said in a text message. “He helped turn me into an NFL player. He was one of the first people to call me after I tore my ACL this year.

“For so many of his players, the relationship between them goes far past player and coach. I always thought he would retire a Wolverine, but I respect his decision to move on.”

“For a coach that’s been a part of my life and my family’s life as long as Greg and (wife) Ann have, it’s obviously disappointing, but I understand where’s he’s coming from,” Hutchinson said.

That Mattison is moving on to Ohio State, Michigan’s rival that has dominated the series the last decade and a half, has been tough for some to grasp.

“It’s definitely interesting with Coach Mattison being with the Michigan program," said Wormley, a who now plays for the Baltimore Ravens. "Those two stints, but he went and coached at Notre Dame, so it’s not like something shocking if you know the history of Coach Mattison. It’s not like he’s doing it out of spite and malice. At the end of the day he has to do what’s best for himself and his family.

“On the surface it hurts a little bit, but at the end of the day, coach Mattison is someone who has helped me in my career and helped me grow as a football player and a person. He was at my wedding seven months ago. Does it hurt? Yeah, but you take a step back, and realize this guy’s looking out for himself.”

Wormley said Mattison, having been a defensive coordinator, taught the players not just their positions, but he wanted them to understand how all 11 worked in unison each play. So he taught them what every player was doing so make them smarter players.

“I’ve been talking to Taco (Charlton), Glasgow, all the guys on the team. It’s a weird situation. If any of us thought there was going to be something for coach Mattison, I thought he would retire maybe after this year. But it’s that drive coach Mattison has to be great. Maybe he wanted to be a defensive coordinator again and this opportunity arose. It’s probably the best defensive coordinator’s job that opened for him.

“On a personal level, coach Mattison is still a mentor and someone I text for advice. I wish him the best but that last weekend in November (when Michigan plays Ohio State), I hope he takes a big fat L. That’s as mean as I can be about it because of the relationship we have.”