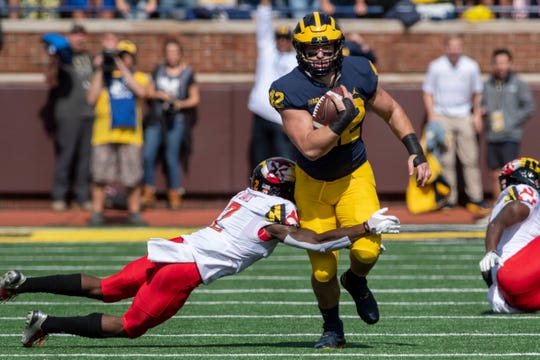 Mason, named the team’s toughest player in 2017 who played predominantly at fullback last season, is practicing at a number of spots this spring with every intention of having him on the field as much as possible.

Michigan coach Jim Harbaugh was upbeat on Monday during a news conference to kick off spring practice, and he seemed most animated discussing the number of options for Mason, who will be a junior. Mason will alternate practicing offense one day, then defense the next, and so on, throughout the spring.

“We’re playing him both ways at three different positions,” Harbaugh said, before reminding himself of a fourth position he also will play. “Feel like the fullback will be used in short-yardage and goal-line situations, predominantly, so we want to get Ben Mason on the field as much as possible. He’ll be playing defensive line, along with playing fullback, along with playing tailback. Will be a lot on his plate, we’ll see how he can handle it. I think he’s going to handle it really well.”

Michigan coach Jim Harbaugh says there are a lot of players who appear to be "attacking it" and "hungry" entering spring. The Detroit News

Mason averaged close to 25 plays a game last season on offense, Harbaugh said. That’s a salad plate of plays and now that full plate will be dinner-sized. Harbaugh said he wants Mason in on 60, 70 plays a game.

“Full game,” Harbaugh said. “Could be as a 3-technique, could be as a defensive end. Could be maybe a little bit undersized as an inside 3-technique, but with his speed and quickness, I don’t know who’s going to stop him, I really don’t.”

That’s when Harbaugh added that Mason will also play some at tight end in the new, no-huddle, up-tempo offense orchestrated by first-year offensive coordinator Josh Gattis. “And he’s got some special teams duties. We’ll probably back down some of his special teams duties other than kickoff coverage. He loves it. He has a love and passion for running down on the kickoff.”

“This could be a lot of fun with Ben Mason this spring, this fall,” Harbaugh said. “He’s great. He’s got the mindset that’s just perfect. Excited about it. Just really fired up to work with Ben. He’s got a bounce in his step every day he comes out to practice, the gleam in his eye. Champing at the bit to be out on the field more. Here you go. We’ve got all kind of ways to get Ben Mason on the field now.”