Wide receiver Xavier Worthy, a four-star recruit from California who verbally committed to Michigan two weeks ago, announced he will enroll at Michigan in January. 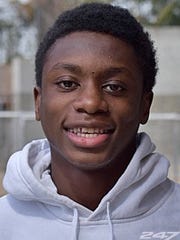 California receiver Xavier Worthy announced Thursday he will skip his senior season and head to UM in January. (Photo: 247Sports)

Wide receiver Xavier Worthy, a four-star recruit from California who verbally committed to Michigan two weeks ago, announced Thursday that he will not play his senior year and will enroll at Michigan in January.

“I’ve decided to forego my senior season and head straight to The Big House,” Worthy posted on Twitter. “I appreciate all the love & support !!”

The 6-foot-1, 160-pound receiver from Fresno (Calif.) Central East caught 54 passes for 992 yards and 16 touchdowns last season and chose the Wolverines over the likes of Alabama, Oregon, Auburn, Georgia and LSU.

I’ve decided to forego my senior season and head straight to The Big House. I appreciate all the love & support !! #1 out 🕺🏾✌🏽

On Wednesday, the California Interscholastic Federation said it won't stage any games in any sports until at least December. That means football would be played in the spring with the last game played no later than April 17, 2021, the CIF announced.

Worthy is part of a 20-member class that has committed to Michigan for 2021.