Wojo: In Detroit sports misery, how much do you blame the coaches?

The lack of urgency to fire coaches is about owners who have mapped out plans of patience and aren’t ready to blow their covers with showy firings.

Wojo: In Detroit sports misery, how much do you blame the coaches?

Detroit — We knew it’d be bad. We signed up for bad. But at some point, a pointed question: How long before it’s bad enough to do something about it?

The Red Wings, Tigers and Pistons have been in various stages of rebuilds for about four years. The Lions have been in the same stage of a rebuild for about 63 years. So far, the main repercussion for all the teams’ recent losing has been a drop in fan interest and an accompanying drop in revenue, although pro franchises don’t exactly need canned-food drives. 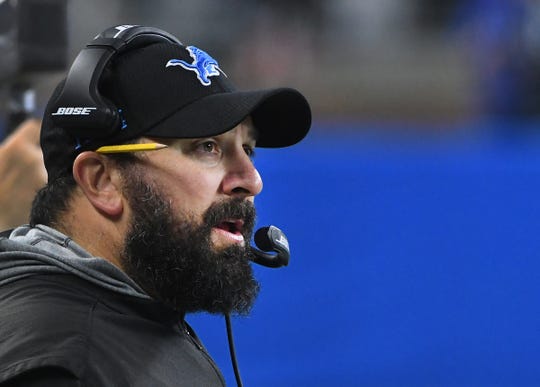 Lions' Matt Patricia gets the most heat because he replaced a coach, Jim Caldwell, who finished 9-7. (Photo: Daniel Mears, Detroit News)

If you happen to coach in Detroit right now, you can’t win. Also, you can’t lose. Because the Wings and Tigers are in full teardowns, Jeff Blashill and Ron Gardenhire get some slack, despite historically awful records. Because Dwane Casey won elsewhere and is sorting out a muddled Pistons roster, he also gets slack. There’s little indication any are in serious danger of losing their jobs, which is both amazing and explainable.

In the NFL, no coach gets slack, especially not one that helped transform a 9-7 team into a 9-22-1 abomination. Matt Patricia receives and deserves the most heat. The Lions never officially committed to a rebuild but slyly pivoted to one after their own failures during GM Bob Quinn’s four years. That destroyed a lot of faith, which is why Patricia’s third year could be his last.

But how twisted are Detroit sports right now? The last coach to finish a season with a winning record got fired — Jim Caldwell after going 9-7 in 2017.

Hey, I’m always willing to holler for leadership changes when necessary. But with these teams not remotely ready to contend from a talent standpoint, can you truly argue a new coach would make a difference? It’s difficult to fairly assess Blashill, Gardenhire and Casey, although it feels irresponsible to say that. And I suspect we won’t be able to say it much longer.

The Wings have the worst record in the NHL, by far, and will have the best shot at the No. 1 pick. Blashill is 148-178-51 in five seasons, incredibly the third-longest-tenured coach in the ax-happy NHL. He’s on the thinnest ice, pun intended, although Steve Yzerman has strongly supported him. It’s not just that the Wings’ well-compensated veterans — Frans Nielsen, Jimmy Howard, Mike Green, Justin Abdelkader, etc. — have failed, it’s that the touted young players — Dylan Larkin, Anthony Mantha, Tyler Bertuzzi, Andreas Athanasiou — have either been hurt or stagnant. Gerard Gallant, recently fired by Las Vegas, could be the next guy in charge, whenever that is.

The Tigers (47-114 last season) already have the No. 1 pick for the second time in three years and have a solid shot to grab it again. Ron Gardenhire is 111-212 entering his third season, but as long as the Tigers don’t start randomly banging on trash cans in the dugout, he’ll likely make it through another year.

The Pistons apparently have abandoned a foolhardy playoff push and are trying to trade Andre Drummond, while showing promising returns on young guys, notably Sekou Doumbouya. Casey, 57-68 in his second season here after seven strong years in Toronto, gets safer and safer with each basket by Doumbouya, or every upward step by youngsters Bruce Brown, Svi Mykhailiuk and Christian Wood.

The lack of urgency to fire coaches here is not about management being lazy, detached or cheap (although we can revisit those charges). It’s about owners — Chris Ilitch, Tom Gores, Martha Ford — who have mapped out plans of patience and aren’t ready to blow their covers with showy firings. They’re so deep into it, no turning back. For fans, apathy still tops anger, although we’re about one year from anger rising.

It’s been miserable, and the numbers are staggering. The four Detroit teams posted a cumulative total of 226 losses in the 2019 calendar year (winning percentage 35.2), the most by one city in one year in North American pro sports history, a statistic painstakingly researched and painfully delivered by longtime Detroit sportswriter Dave Hogg.

It’s so much worse because we used to have it so much better The Wings have won four Stanley Cups since 1997. The Pistons have won three NBA titles since 1989. The Tigers haven’t won the World Series since 1984 but have reached the postseason five times since 2006 and played in two World Series.

The Lions? Well, they’ve made the playoffs three times since 2011 and are 0-3. Also, they beat New England in the 2018 regular season. Oh, and they led Kansas City in the closing minutes last season.

Would Scotty Bowman or Mike Babcock win more games with these Wings, who have lots of injuries, no defensemen and no goaltending? Not before their heads exploded (literally!).

Would Larry Brown have coaxed more out of Drummond and Reggie Jackson, or magically kept Blake Griffin healthy? No, he would’ve bolted after 15 games.

Would Jim Leyland have been able to tape Miguel Cabrera’s body together and lift a Tigers team that has intriguing pitchers in the minors, but virtually no impactful major leaguers? Ha. He would’ve become a pack-an-hour smoker.

For now, improvements must be generated mostly by the general managers — Yzerman, Al Avila, Ed Stefanski, Quinn — in trades and drafts, and that’s where the scrutiny falls. Yzerman hasn’t been here a year and bears no responsibility for the Wings mess. Avila and Stefanski inherited bad situations, although Avila has done little to make it better. Quinn inherited an OK situation and made it worse.

I’m not letting the coaches off the hook. (Yes you are!) (No I’m not!) I’m suggesting talent acquisition is a much larger issue than talent development. Development was Casey’s strength in Toronto and it’s starting to show here. At the Feb. 6 trade deadline, the Pistons should deal the bulk of their experienced players — even though Derrick Rose is so fun to watch — and flood the floor with youngsters.

That’s where Blashill, 46, has to show more, and you wonder if a few young players have stopped getting the message. It wouldn’t be a surprise, considering they’ve heard his voice since he coached some of them in Grand Rapids.

Gardenhire, 62, has never been viewed as a long-term solution, and his job is to instill professionalism and fundamentals in a team that has more stopgaps than actual major-league prospects. You can’t say he’s made an impact in that regard, although again, hard to tell with such a talent deficit.

It’s so dreary around here, we’re constantly forced to alter expectations, lowering the floor with no ceiling in sight. The blame is widespread, from ownership to management to underperforming, overpaid veteran players, to simple cyclical realities. The coaches haven’t made tangible, positive differences, and that’s a problem. Alas, it’s not even the biggest problem.