This is the stuff that gets a coach fired. Not now, but Brady Hoke is on the clock.

Coach Brady Hoke stands on the sideline in the fourth quarter, on the way to Michigan’s first nonconference loss at Michigan Stadium under his regime.(Photo: Elizabeth Conley, Detroit News) 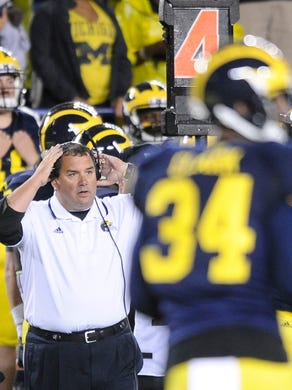 Michigan Wolverines head coach Brady Hoke adjusts a headset on the sidelines in the fourth quarter of a 26-10 loss to Utah at Michigan Stadium on Saturday, September 20, 2014. Elizabeth Conley/ Detroit News
Fullscreen

View of a mostly empty Michigan Stadium as the Utah Utes and Michigan Wolverines finish a game after a 2 hour and 24 minute weather delay on September 20, 2014. Gregory Shamus / Getty Images
Fullscreen 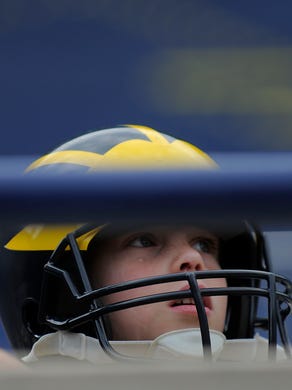 Gray Andrews, 6, of San Antonio, Texas, hangs out with his dad, Mike, before Saturday's UM game against Utah. The Andrews are on a father and son road trip across the country to check out sports venues and games. Elizabeth Conley / Detroit News
Fullscreen

The UM football team makes its way onto the field for practice before Saturday's game. Elizabeth Conley / Detroit News
Fullscreen 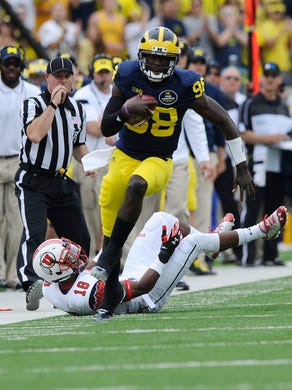 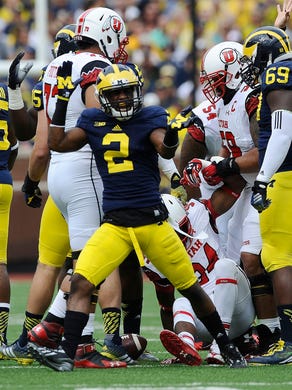 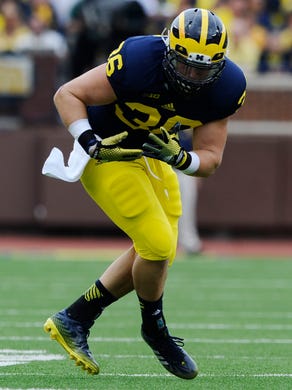 Utah quarterback Travis Wilson stays down on the sideline after flipping over a Michigan defensive player in the second quarter. Wilson returned for the second half. Elizabeth Conley / Detroit News
Fullscreen

Michigan running back Justice Hayes gets a few yards in the third quarter before being stopped by Utah defensive back Eric Rowe. Elizabeth Conley / Detroit News
Fullscreen

Football fans leave the stadium as the rain falls and the stands are cleared due to the weather. Elizabeth Conley / The Detroit News
Fullscreen 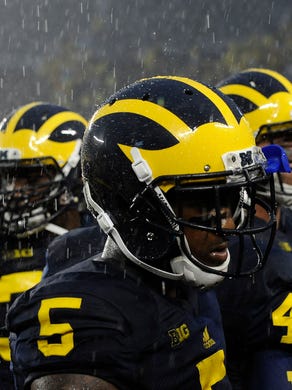 UM's football team makes its way to the tunnel after the game was delayed due to weather. Elizabeth Conley / Detroit News The Detroit News
Fullscreen Michigan cheerleaders make their way off the field after the game was delayed due to weather. Elizabeth Conley / Detroit News The Detroit News
Fullscreen

Football fans leave the stadium as the rain falls and the stands are cleared due to the weather. Elizabeth Conley / Detroit News The Detroit News
Fullscreen

Michigan defensive tackle Willie Henry makes his way off the field as rain falls during the fourth quarter. Henry got the only touchdown for the Wolverines.  Elizabeth Conley / Detroit News The Detroit News
Fullscreen 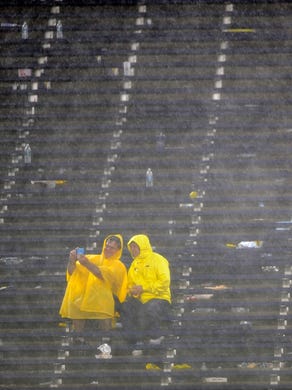 Football fans take a selfie as the stadium is cleared due to the weather. Elizabeth Conley / Detroit News The Detroit News
Fullscreen

Utah Utes wide receiver Dominique Hatfield (15) holds up the ball after he thought he intercepted it in the fourth. Elizabeth Conley/ Detroit News
Fullscreen 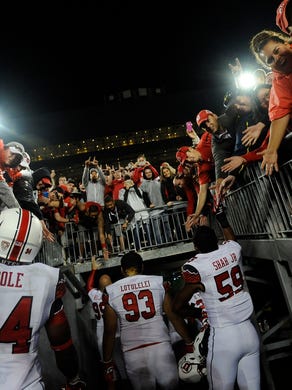 Ann Arbor — This is as low as it goes, at least so far. This is the stuff that gets a coach fired. Not now, not Monday, but Brady Hoke is on the clock, and it's ticking ominously.

It wasn't just the 26-10 loss to Utah, a wet mess halted for two-and-a-half hours by rain and lightning. It was the horrific offense, the downfall of Devin Gardner and all the other ugly images. It was Hoke and defensive coordinator Greg Mattison yelling at each other late in the first half after Michigan was penalized for a sideline infraction, which Hoke later brushed off as a "discussion" between competitors who have known each other for 30 years.

Whatever it was, it looked like a staff feeling the rising heat. Hoke has to know his job is in jeopardy, and athletic director Dave Brandon's previous stance of public support seems outdated now. Of course Hoke should finish out the season, and the 2-2 Wolverines should try to salvage something in the Big Ten, but it will take a stirring turnaround for him to recover from this.

In the fourth year of a regime, a team can't look this shaken, an offense can't look this disjointed. Programs can't go through constant cycles of change, but at some point Michigan has to get this right, if Hoke can't get it right. He's 28-15 overall, 15-9 in the Big Ten, but has more signatures losses than signature wins. Michigan is 2-8 in its last 10 games against opponents from the five power conferences, and even in this mediocre Big Ten, no victories are guaranteed.

The rain that darkened the sky and emptied the stadium Saturday didn't put out any fires or wash away the rubble. In many ways, the nasty weather was merciful, delaying the game with 7:51 left in the fourth quarter. By the time the teams returned, only a smattering of fans remained, maybe a thousand or two, and the majority were Utah supporters.

Utah may be a good team from a good conference, the Pac-12, and its offense can be dynamic. Michigan's defense played fairly well, holding the Utes to 286 yards, although special teams surrendered a 66-yard punt-return touchdown. The Utes also lost their starting quarterback, Travis Wilson, for a while to injury and still made all the big plays.

Michigan was beaten down, and I'm not sure where it goes from here. For all the talk of trying to knock off their rivals, this was the type of game the Wolverines couldn't drop — their first non-conference home loss under Hoke. The offense is going backward and didn't even get into the red zone against Utah — just as it failed to do in the 31-0 loss at Notre Dame.

Gardner threw two more interceptions and was pulled, and his confidence looks shattered. Backup Shane Morris came in and threw another interception, right before the deluge stopped play. As imagery goes, it was stunning in its timing.

Hoke wouldn't commit to keeping Gardner as the starter, and said he'd let it play out this week, before the conference opener at home against Minnesota. Hoke maintained his standard calm front, and insisted the Wolverines still can accomplish plenty.

"Those goals are all out there, and I do believe we have the team that can do that," he said. "Now, you can't play the way you did today, we realize that. But we got a bunch of guys who work their tails off, and are supportive and believe in each other."

We've heard those lines before, and while it's fine for a coach to boost his team, it's not easy to believe right now. It would take rapid development just to contend in the Big Ten, and even that might not be enough. Because the offensive line struggles and Gardner is turnover-prone, defenses attack with blitzes, and Michigan can't find answers.

There was restlessness from the home crowd, and while Hoke reiterated he doesn't like fans booing players, I suspect they were directed somewhere else.

Trying to find their footing

The Wolverines have been grasping the past seven years, trying to find a new identity or an old identity. In this game, it was encapsulated by Gardner, the senior who was supposed to be better under new offensive coordinator Doug Nussmeier. Gardner completed 14 of 27 passes for 148 yards, and when Utah's defense started blanketing Devin Funchess, Gardner was lost.

Later in the fourth quarter, he threw into coverage and was picked off by linebacker Gionni Paul. As Gardner ran to the sideline, he ripped off his helmet and flung it to the ground. That was it for him, and perhaps should be it for a while. Morris is a sophomore left-hander with a strong arm, and his skill set might be better-suited for the pro-style attack Michigan is desperately trying to recreate.

Gardner is a talented guy who has bounced from offensive system to offensive system and hasn't been refined. I suspect Hoke will try to ride it out with him, partly because Morris also couldn't do much in a tough spot. But I say this without malice toward a player who takes a lot of tough hits: Gardner is the type of quarterback some might call a coach-killer, with hints of promise buried under mistakes.

Hoke fired offensive coordinator Al Borges after the 7-6 mark last season and brought in Nussmeier. Gardner raved about him, but not much has changed. Through four games, he has six interceptions and a fumble, while completing 63 percent of his passes.

"We haven't given up faith about what we can do this year, but obviously we're disappointed," center Jack Miller said. "(Devin) is a competitor and I'm sure he didn't want to get pulled and I'm sure he's not thrilled with what happened out there. But he kept his head up and was Shane's biggest fan."

The Wolverines sound like they're trying to talk themselves into confidence, following the lead of their coach. Yes, there's a lot of football left, but the words don't mean much anymore. Better results are mandatory now, because this was the performance that put Hoke's job squarely in danger.