Formerly big game gets no respect from rest of Big Ten, pollsters. 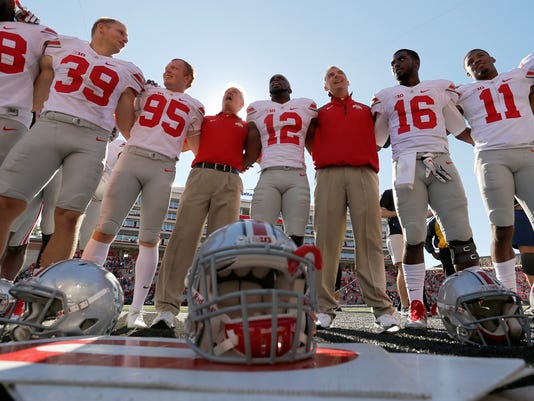 Oh, the Buckeyes will have great fun Saturday at the game (formerly The Game), and fans might even stay until halftime to watch the band spell out script H-O-K-E. They'll laugh and cheer and pretend all is right, but they know it's not.

The truth is, the rivalry passion has seeped out, like chaw juice dribbling down a Buckeye's chin(s). Beating Michigan is neither the challenge nor the point anymore. Nobody wants to admit it, but this is the problem with Michigan's inexplicable de-emphasis of tackle football: A wobbly conference that desperately wants to be considered better than it is, no longer can count on the program renowned for inflated self-worth.

Now, there might be some who disagree, such as pretty much everyone associated with every Big Ten school and every major conference, plus Notre Dame and the decent directional Michigans (Western and Central). But hear me out.

Michigan's controversial decision nearly a decade ago to "head in a less championship-oriented direction" has adversely affected the Big Ten's power base. It's the same with Penn State's woes. Heck, the Buckeyes beat the Nittany Lions in double overtime on the road and got downgraded for it. Michigan State aims for its fourth double-digit victory total in five seasons at Penn State, and still doesn't get enough credit for smashing stinky teams.

So Ohio State (10-1) could beat Michigan (5-6) for the 10th time in 11 years and win its 24th consecutive conference regular-season game and still not be assured a spot in the four-team playoff. Why? Well, a couple of reasons.

In the playoff bylaws, I cite Section 14.06b, Paragraph XII, which states, and I quote, "Any team that is deemed to have trailed Indiana in the second half of a home game shall be viewed suspiciously." Further, in Section 35.21: "Endeavor not to lose at home to Virginia Tech, under any circumstances."

And of course, this factor: A win over Michigan doesn't count for much these days. Just ask the Spartans, who have done a tremendous job rearranging sibling standings, yet remain stunted by the Big Ten's national disdain. For all they've accomplished, the Spartans couldn't even boost the Buckeyes into the playoff with a solid home loss to them.

Now all Ohio State can do is beat Michigan, beat Wisconsin or Minnesota in the title game, then send Urban Meyer on a 15-day, 29-city whining tour. Or, hope the NCAA suddenly notices the SEC has more paid pros than the Jacksonville Jaguars.

Basically, Michigan has two options. It can hope Meyer gets another burning desire to spend more time with his family while maximizing leverage for another job. Or it can get ticked off.

I mean, it was fine to try the spread offense all the cool kids are using, and Rich Rodriguez might have succeeded if he'd ever stopped saying "gahl-danggit." And it was OK to bring in Brady Hoke, who preached tradition and respect without the added cost of headsets and long-sleeved shirts.

But bullies like Ohio State and Michigan State and Maryland and Rutgers have done it now. They're gonna force Michigan to go ahead and hire Jim Harbaugh as head coach, with Lane Kiffin as offensive coordinator and Pat Narduzzi as defensive coordinator. And I'm fairly certain Les Miles would take the athletic director's job.

Even the snooty can be pushed just so far. I think seven years of 46-41 football under Rodriguez and Hoke is sufficient repayment for John Cooper's 2-10-1 record against Michigan. Can we call it even and get back to playing The Game? The Buckeyes got sick of being mocked and did something about it, hiring Jim Tressel and figuring they'd worry later about tattoo infections and vacated victories.

Maybe it's time for Michigan to roll up its monogrammed sleeves and get a little dirty for a change, at least on the football field. The Wolverines fought as underdogs last season, losing 42-41, but the real highlight came when Buckeyes offensive lineman Marcus Hall was kicked out and exited with a single-digit salute to the crowd.

According to my ill-informed sources, Ohio State's band will commemorate the incident Saturday, when a chunky tuba player charges out and performs the traditional dotting of the middle finger.

Nastiness isn't always good, but it's better than apathy. The Wolverines are three-touchdown underdogs but perhaps can lean on Buckeye lore. Back in 1987, Earle Bruce was fired before the game and his team wore headbands in his honor, then beat Michigan, 23-20.

Hoke's fate isn't public but it's pretty much known, especially after the loss to Maryland reduced Michigan's bowl chances to .0037 percent. His players don't have to honor him with headbands (or headsets), although a couple of touchdowns would be a nice gesture. You only hope they honor the rivalry, which surely will be back someday.

■Michigan State at Penn State: The Spartans can finish 10-2 and clinch a bid to a big, fancy bowl. They also can point out they're 10-0 against opponents that don't start with an O (Oregon, Ohio State), which is odd because Michigan State has its best scoring O in program history. Penn State is 6-5 and bowl eligible, although that could be rescinded after losing to Illinois. Michigan State 30-10

■Minnesota at Wisconsin: The Golden Gophers will try to hold Badgers back Melvin Gordon below the 408-yard mark, which won't be easy. If they do, they could reach the title game, which would validate the rise of Minnesota and confirm the fall of the Big Ten. Wisconsin 35-28

■Auburn at Alabama: They call this the Iron Bowl because instate neighbors get to iron out their differences. After last year's heartbreaker, the angry Crimson Tide are more inclined to make it the Tire Iron Bowl. Alabama 31-17

■Notre Dame at USC: They call this the Laid An Egg Bowl, for obvious reasons. USC 37-27