Michigan is all in on Jim Harbaugh, 49ers coach and former star quarterback. 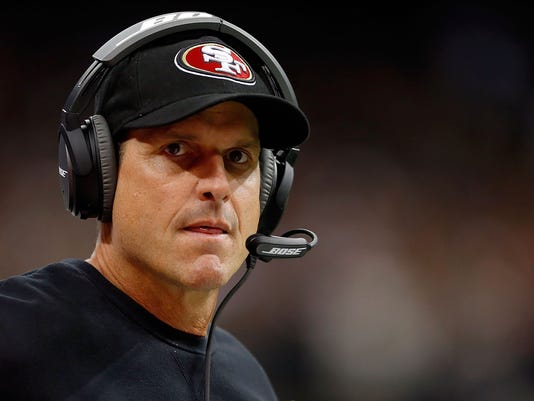 Jim Harbaugh has compiled a 43-18-1 record with the San Francisco 49ers, but they’ve been eliminated from postseason play.(Photo: Wesley Hitt / Getty Images)

Michigan spent the past seven years being humbled, and enlightened. In college football these days, you're either all in or you're losing home games to Maryland. So Michigan is all in on Jim Harbaugh, the move it absolutely has to make.

Before typing one more sentence, let me say this: I don't know if Harbaugh will accept Michigan's offer, but I certainly believe the chances are rising. Nobody knows for sure, even if they say they do. But this is not a cursory, fleeting attempt by interim athletic director Jim Hackett, and there are reasons Michigan has a legitimate shot.

Harbaugh will be the most coveted coach in football — college or pro — when his run with the 49ers is expected to end in 10 days. He has a year left on his contract, and that's actually helped Michigan maneuver to make its reported six-year, $48 million offer. Other NFL suitors can't tamper with Harbaugh (wink, wink), and also know they'd have to trade with the 49ers to get him.

Hackett doesn't have to make a trade, just a deal. And he has a pile of cash, as well as emotional tugs that probably resonate with Harbaugh. Michigan has conducted a full-fledged recruitment that started when Hackett replaced Dave Brandon, who was shoved out amid Brady Hoke's tumultuous final season. Pronouncements of support have come from every Michigan corner, from former coach Lloyd Carr to Heisman Trophy winners Desmond Howard and Charles Woodson, to prominent donors such as billionaire Stephen Ross.

I doubt there'd be this much effort expended if Michigan had an indication Harbaugh wasn't interested. I also doubt he'd be duping or leading on his alma mater. So the question is, why hasn't Harbaugh publicly acknowledged or accepted the job yet?

Well, the 49ers were just eliminated last Sunday from playoff contention and have two games remaining. He doesn't want to walk away before the season ends Dec. 28, and the 49ers don't want to fire him and lose the ability to trade him. And maybe Harbaugh simply hasn't made up his mind and wants to see what the Raiders, or another NFL team, will offer.

When quizzed about it in San Francisco Thursday, he reiterated he was only talking about the job he had, and was intent on finishing the season. How long can Michigan wait? Until the first of the year, if necessary, but the Dec. 29-31 window would be better. This is a dead period in recruiting, and other candidates are still coaching. Based on the money, Michigan is making a strong enough statement that even if turned down, there should be a solid Plan B.

UM has gone all in

There's risk in such a singular pursuit, rendering everyone else a second choice. But I bet a few candidates — Mississippi State's Dan Mullen, Oklahoma's Bob Stoops, etc. — would consider a big offer, despite the perceived slight.

Hackett appears to be a smart man who doesn't swim in college football's conventional lanes, and has operated a stealthy search. By reportedly offering the largest salary in college football — Michigan isn't confirming anything, of course — he has deftly removed money from the equation, while inserting money into the equation.

If Harbaugh doesn't come, it won't be for lack of compensation, and Michigan can tout it did all it could. This is what it should have done four years ago, when Harbaugh left Stanford for San Francisco. Michigan is more desperate now, and there's no ambiguity in its quest. Harbaugh is the ideal candidate, the only candidate for now. He's young enough (50), driven enough and connected enough to immediately restore some luster to Michigan, with victories theoretically to follow.

It's always a gamble when you take a mighty swing, but Michigan has little choice. It's possible an agent leaked the dollar figures as a leverage play, to flush out NFL offers. That makes business sense, although I don't think Harbaugh needs much more leverage. Several NFL teams supposedly would line up.

It should come down to this: Does Harbaugh want to return to Michigan as the lauded prodigal son (emotional angle), or remain in the NFL where there's no recruiting and glad-handing (business angle)?

Only Harbaugh knows, and he's an emotional, unpredictable guy. The NFL is a cold, brutal business, and perhaps he's accepted it. Winning a Super Bowl is the ultimate goal, and that's why so many NFL types are convinced he isn't going back to college.

But didn't Harbaugh just spend four years discovering how hard it is to win a Super Bowl? He took the 49ers to the NFC Championship Game three straight times and lost to his brother, John, in the Super Bowl two years ago. If winning is all that matters in the NFL, why is Harbaugh's run in San Francisco almost assuredly ending, despite a 43-18-1 record?

It's reportedly because he had personality and philosophical differences with owner Jed York and GM Trent Baalke. Pro players are their own mini-businesses, and Harbaugh's hard-driving intensity — abrasiveness, even — makes it difficult to sustain. That style seemingly would work better with impressionable college kids, who churn through every four years.

Family issues also might play a role. The Raiders could offer money and control and a chance for Harbaugh to stay in the San Francisco area. While that temptation is real, I also think Harbaugh's affection for Bo Schembechler and affinity to Michigan are real.

Maybe it faded with time, or was damaged by the nasty spat in 2007 after Harbaugh's criticism of Michigan's academic standards, which riled Carr and others. But since then, a lot of relationships have been repaired, and I'm not sure Harbaugh would bother to mend fences if he's just prepared to knock them down again.

Michigan people have to change their perceptions too, and drop the arrogant sensitivities. It's time to put the big-boy pants back on and dial down the high-minded stuff, that Michigan somehow should be different. Even new president Mark Schlissel is beginning to understand the nature of the beast, made easier when he sees Ross donating $100 million to athletics.

Is $48 million a ridiculous amount for a football coach? Sure. But if you don't like the escalating investment, don't pretend you're playing the game. Last I checked, Michigan still has a 110,000-seat stadium that isn't going anywhere. And when fans fill it, they generate revenue for all the school's sports.

The difference now is, Michigan is tired of getting its heads bashed in by Michigan State and Ohio State. Brandon didn't even make it to November, and Hoke was gone immediately after the 5-7 season. I've said it about a zillion times, and perhaps Michigan is saying it now, too. There's a ruthlessness about college football that can't be ignored. The seamiest elements don't have to be embraced, so this isn't an invitation to cheat or diminish academics. But the resources and hubris needed to compete at the highest level are clear.

To be all in, Michigan has to take its best shot at the best candidate. Whether Hackett and his staff use numbers or nostalgia, they're going to make it difficult for Harbaugh to turn them down.