Eric Ebron has heard the label, and he plans to refute the label.

Quarterbacks Anthony Boone, Matthew Stafford, Kellen Moore and Dan Orlovsky run the field, shoeless, at the end of the Detroit Lions OTA at the training facility in Allen Park, Michigan on May 27, 2015. Daniel Mears/Detroit News
Fullscreen

Running back Joique Bell, who did not participate in drills, and quarterback Matthew Stafford talk on the field before practice. Daniel Mears/Detroit News
Fullscreen 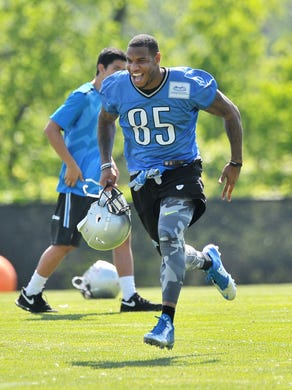 Tight end Eric Ebron is ready to go, as the whistles are blown and OTAs on Wednesday begins. Daniel Mears/Detroit News
Fullscreen

Quarterback Matthew Stafford talks with running back Joique Bell, who did not participate in drills. Daniel Mears/Detroit News
Fullscreen 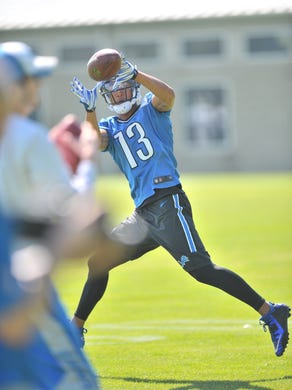 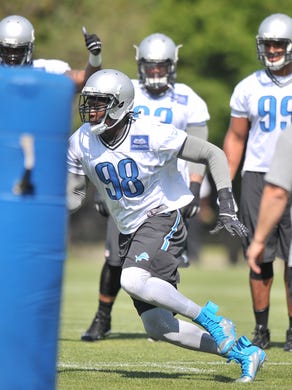 Safety James Ihedigbo readies his hands for a reception while working on a throwing machine at the end of practice. Daniel Mears, Detroit News
Fullscreen

Veteran cornerback Rashean Mathis, 13 years in the league, plans to pursue golf professionally after his football career is over. Daniel Mears/Detroit News
Fullscreen

Cornerback Crezdon Butler readies his hands for a reception while working on a throwing machine at the end of practice. Daniel Mears/Detroit News
Fullscreen

Cornerback Nevin Lawson readies his hands for a reception while working on a throwing machine at the end of practice. Daniel Mears/Detroit News
Fullscreen

Cornerback Bill Bentley readies his hands for a reception while working on a throwing machine at the end of practice. Daniel Mears/Detroit News
Fullscreen

Cornerback Josh Wilson readies his hands for a reception while working on a throwing machine at the end of practice. Daniel Mears/Detroit News
Fullscreen

Tackles Michael Williams and rookie Corey Robinson of South Carolina hit the sled from their knees at the end of practice. Daniel Mears/Detroit News
Fullscreen

Safety James Ihedigbo readies his hands for a reception while working on a throwing machine at the end of practice. Daniel Mears, Detroit News
Fullscreen

Lions head coach Jim Caldwell is all smiles as he leaves practice Wednesday during the second of a three-day OTAs in Allen Park. Daniel Mears, Detroit News
Fullscreen

Allen Park — Eric Ebron has heard the label, and he plans to refute the label. He doesn't say it boastfully, just purposefully, as if it stung right before it motivated.

The "bust" moniker isn't fair after one season, and the path to "bust out" isn't far in the NFL. But if Ebron is to make that leap, he needs to chew on his new-found humility and turn into the freakish player the Lions thought they'd drafted.

He looks stronger, physically. He looks and sounds more mature, and not just because he shaved off his Mohawk and dialed down the hype. It's only offseason training, but teammates and coaches have noticed a difference. Is it wishful thinking because the offense desperately needs Ebron to make an impact? Maybe.

But as erratic as he was as a rookie, it's too early to dismiss him as a receiving threat. The Lions, who gambled unnecessarily by drafting him No. 10, certainly can't dismiss him. And to his credit, Ebron is trying to turn disappointment into enlightenment. When he dropped a couple of passes during the workout Wednesday, he immediately dropped to the ground and did 15 pushups on his own.

"The one over the middle, I shouldn't have dropped, and I got down on myself and it made me drop the next one," Ebron said. "Today was a bit jittery but I'll settle down, that will never happen again."

Can we get a joyous "Amen!" from Lions fans? Dropped passes have been Ebron's plague, going back to his college days at North Carolina. If he somehow fixes that — Concentration? Repetition? — he fixes a lot.

No matter how you view where Ebron was drafted (too high), or what he produced (too little: 25 catches, 248 yards), you can't deny he's uniquely gifted, a tight end-wide receiver hybrid with size and speed. He admits his head was spinning last season, which contributed to his hands spinning, which contributed to the sticky labels.

"It's one year, you can claim what you want to claim," Ebron said of the "bust" notion. "Your opinions and statements don't mean anything to me. We'll find out in August — the whole world will too."

That's as close as Ebron will edge to brashness these days, burned by expectations and his own sense of self-worth. Actually, he might have slid through the 2014 season without so much attention if not for the circumstances of his arrival. The Lions were enamored with fitting his versatility into Joe Lombardi's offense, which previously turned Saints hybrid Jimmy Graham into a star.

So GM Martin Mayhew grabbed Ebron, and it became a notorious reach because of the players drafted afterward. Taylor Lewan went to the Titans at No. 11 and immediately produced at tackle. The next two players — receiver Odell Beckham Jr. to the Giants at No. 12 and defensive tackle Aaron Donald to the Rams at No. 13 — became instant stars.

It's worth noting the Lions did go 11-5, and while the offense was low-production, it also was effectively low-risk. Matthew Stafford needs to show more in his seventh NFL season, his second under Jim Caldwell and Lombardi, and it would help if someone besides Calvin Johnson and Golden Tate became a consistent target.

Ebron is a glib, outgoing guy who would become a huge fan favorite if he produced. He was asked if the pressure grew because of those drafted after him, including Beckham, who had 1,305 receiving yards.

"Nice, pretty good," Ebron said of Beckham. "Aaron Donald? Nice, pretty good. Played with them, played against them, doesn't separate me or make me any different from those guys. My learning curve was a little bit different."

Was it a humbling experience?

"Absolutely, absolutely," he said. "I'm a totally different person, just more mature. I was always better than everyone else (before he got to the NFL) and I never really heeded advice. Now I do from everybody —everybody."

He's right about the learning curve. Ebron could line up at any receiver position in the complex offense, and Lombardi admitted they might have thrown too much at him.

We won't know if Ebron really is catching on until training camp. But we can tell if he's taking it seriously, and judging by his body and demeanor, he is.

"He's in better shape than he was last year at this time," Caldwell said. "He always could run, but he's running better in terms of endurance. His muscle weight has gone up, his fat weight's gone down. And you can see he's working on his hands."

Maturity is mentioned a lot when a young player struggles, and it takes more than an improved physique to confirm it. In Wednesday's session, Ebron sprinted downfield on deep routes, catching some, missing some, doing pushups after some.

"He seems to be grown up a bit, more focused," Tate said. "I think his confidence is way high right now. Follow him on Instagram and Twitter and you can tell he took pride in showing off his work ethic. He's a specimen athletically."

That's where this tale began, with the Lions (and other teams) fixated on Ebron's athletic traits. It's usually a good place to start, with unique physical skills. Then the mental part gets stacked on top, and you discover if a player can handle it.

Ebron said he had no trouble adjusting to the actual speed of the games, but to the speed of the thought process, and how many elements he had to digest.

It was supposed to make it difficult on defenses, not on him. It's still possible, if Ebron truly knows now what he didn't know then.