The aging Red Wings leaders don’t have a lot of time left, and Pavel Datsyuk might have precisely one game left. 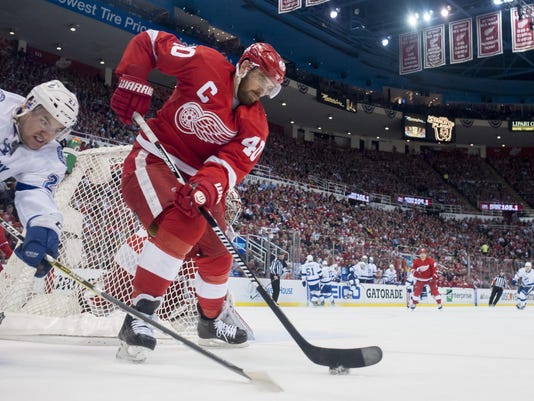 The Red Wings’ old guard, like left wing Henrik Zetterberg, have struggled to ignite the offense in the series against the Lightning.(Photo: David Guralnick / Detroit News)

The aging Red Wings leaders don’t have a lot of time left, and Datsyuk might have precisely one game left. If he sticks to his retirement plan, it could end Thursday night, with Detroit trailing Tampa Bay, 3-1.

That would be too bad, and perhaps Datsyuk can do something about it. Maybe he can revive some magic on the Wings paltry power play, help steal a game and buy a little time. More likely, Datsyuk is doing all he can with his damaged ankle and 37-year-old body, and doesn’t have much more to give. He suspected it when he revealed he was considering retirement, and I doubt he’s seen anything to change his mind.

The Lightning has been better, although not by a wide margin, and especially better at the top of their roster. The Wings are in this dire predicament — facing a first-round ouster for the fourth time in five years — partly because their big three had the audacity to age at a normal human rate. We’ve been spoiled watching guys like Nicklas Lidstrom, Steve Yzerman and Igor Larionov remain effective into their late-30s and early-40s. Those guys were special, and surrounded by tons of talent.

Datsyuk, Zetterberg, 35, and Kronwall, 35, don’t have the same benefit, and the wear is apparent. Datsyuk used to be capable of slipping through narrow spaces on clogged ice, but the flashes have been less frequent. He doesn’t have a point against Tampa Bay, and you have to go back to the 2003 playoffs against Anaheim to find a series in which he’s been blanked.

To be clear, this is not a finger-of-blame issue. The Wings haven’t been good enough in a lot of areas. Datsyuk has had chances and created chances, and leads the team with 15 shots. And it’s not like anyone else is burning out red lights. Nobody has more than one goal, but only two Wings are pointless — Datsyuk and the injured Alexey Marchenko.

Jeff Blashill is baffled by a power play that’s 1-for-21, but he’s not interested in assigning blame. In fact, Kronwall, Zetterberg and Datsyuk have the best plus-minuses on the team in the series. And according to Blashill, citing the Wings’ own statistics, Datsyuk and Zetterberg rank first and second in scoring chances.

“They’re like other guys — we’d like them to produce more and they’d like to produce more,” Blashill said Wednesday before the team departed for Tampa, Fla. “But it’s not like they’re not having an impact on the series.”

It’s not just that the older Wings stars have slowed, but others haven’t risen as quickly as hoped. Ken Holland will face pressure this offseason to adjust, and Blashill is feeling it now to figure things out. Some of the younger players — Riley Sheahan, Luke Glendening, Dylan Larkin, Gustav Nyquist, Andreas Athanasiou — have had shine moments, but not many star moments.

The Lightning stars have shined, with Nikita Kucherov scoring five goals and linemates Tyler Johnson and Alex Killorn right behind him. So the Wings expend frustration grappling with ways to counter one dynamic line on a team that has holes, due to injuries. If Detroit’s top-line players don’t have answers, it’s unclear who does.

Blashill defended them, as he should, because there aren’t many other options. When it was suggested Datsyuk seems worn down, Kronwall strongly disagreed.

“I don’t think so whatsoever,” Kronwall sad. “Even though Pav doesn’t have a point, he’s still played really well. Probably he can be a little bit better, like the rest of us. But at the end of the day, Pavel is Pavel Datsyuk for a reason. He usually comes up with big plays.”

Measured against normal players, Datsyuk is still dangerous. Measured against his own standard, it’s a harsher reality. Same for Zetterberg and Kronwall, who both admit they haven’t played well enough.

“Start with me, I have to be better, got to produce more,” Zetterberg said. “I’m not happy with the way it’s been so far. … I think when things don’t go well, you overthink stuff. When everything goes well, you just do stuff, and it works out. We just gotta keep believing in what we’re doing.”

That’s long been the greatest strength of the Red Wings, belief in their system. But it can become a weakness, even a stubbornness. Blashill has played Datysuk and Zetterberg together at times, along with Larkin. He’s broken them up at times. He puts them on the power play and relies on their guile, but it’s harder and harder for them to physically crank it up.

Maybe the Wings need to give more power-play opportunity to quick skaters and shooters such as Larkin and Athanasiou. Blashill admitted the team considered bringing Anthony Mantha up from the minors, and the big shooting forward has been productive in limited stints before. But it’s a matter of time, and in Blashill’s mind, there isn’t enough practice time to add new pieces and develop any chemistry.

When Tampa Bay was struggling on its power play, Jon Cooper shuffled the units and put more on his top players. Blashill would love to do the same and get similar results.

“The message is, to the 10 guys that are on (the two power-play units), let’s make a few more plays,” Blashill said. “You guys are great hockey players, have been for a long time, let’s challenge each other and be a little bit better.”