In the next three weeks, the big games will be centered in our humble Midwest, from Columbus to Ann Arbor to Kalamazoo.

Bob Wojnowski, John Niyo, Angelique Chengelis and Matt Charboneau break down the Wolverines' and Spartans' prospects, as well as those of the undefeated Western Michigan Broncos, going into Week 12 of the college football season. 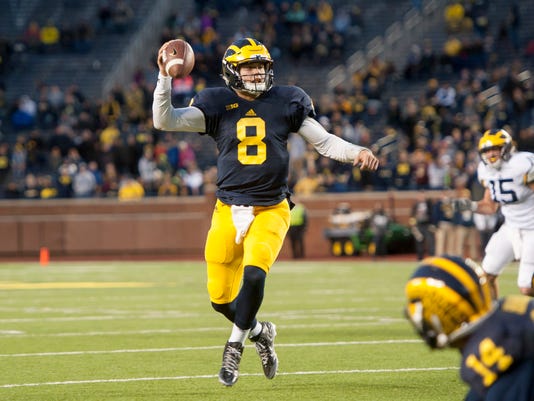 No one is sure how or why it happened, but by all accounts, it indeed has happened. The Big Ten is the new power broker in college football, essentially the new Southeastern Conference, except with actual books and classrooms and stuff.

In the next three weeks, the big games will be centered in our humble Midwest, from Columbus to Ann Arbor to Kalamazoo. The Big Ten will determine its champion, then decide how many teams it will send to the playoff — anywhere from one to four — and then decide whether an SEC team not named Alabama should be allowed to play in a major bowl.

In a crazy, ever-evolving season, the power base has shifted, at least according to the recent playoff rankings that have four Big Ten teams in the top eight and one SEC squad in the top 14. (If the power base shifts back, I reserve the right to suggest this column was compiled by one of those fake-news writers on Facebook.)

The college football world is focused on the Big Ten, so let’s get cleaned up, folks. That means everyone needs to dress appropriately, so ditch the jean overalls, Cornhuskers. That means tidying up the neighborhood, so throw a blanket over the old refrigerator in the backyard, Buckeyes. That means controlling bodily functions, so limit yourselves to one six-pack per hour, Badgers. That means act like you belong and stop debating what to do with scandal-tainted statues, Nittany Lions.

With three showdowns in our state this weekend, we’re asking for pleasant, non-aggressive behavior, and not only from Michigan State’s defensive line. That means the Scarlet Knights celebration better not have lingered past Wednesday night, Spartans. That means getting exposed by an unranked opponent better not become a habit, Wolverines.

It’s pretty clear Michigan learned a lesson in that 14-13 loss at Iowa. The lesson is, playing eight home games is fun, but 12 would be better. Now 9-1, the Wolverines have their destiny in their own hands, or Jim Harbaugh’s hands, or in backup quarterback John O’Korn’s hands. I suspect O’Korn will be O’K’ against Indiana, but if Michigan spends any time looking ahead to Ohio State or Wisconsin or Clemson or Alabama, it could be in trouble. (Fine, spend the second half Saturday looking ahead, but that’s it.)

You gotta watch out for “trap” games this time of year, when the cold winds blow and the most important person can be the field goal kicker or punter or replay official. For instance, Michigan State ruined Ohio State’s quest for a magical 12-0 season with that stunning 17-14 victory in Columbus last year. It’s still unclear if Urban Meyer’s headset was working during the game or if he was playing Sudoku on his phone, but it was devastating for the Buckeyes.

So now, Ohio State is determined to ruin Michigan State’s quest for a magical 5-7 season. You know the angry Buckeyes won’t take the Spartans lightly, even though this is the odd year they’re perfectly entitled to do so. Cautionary tale: Rutgers took Michigan State lightly and look what happened.

This should be one of the great stretch drives in the history of the four-team national playoff, dating all the way back to 2014. Michigan shocked everyone by remaining No. 3 in the rankings, just behind No. 2 Ohio State and ahead of No. 7 Wisconsin, No. 8 Penn State and No. 21 Western Michigan. This spawned a feverish debate that’s amusing but not completely illogical: If things fall right, could the Big Ten take all four playoff spots?

Wait, that’s not it. Here it is: If things fall right, could a second Big Ten team make the playoff with two losses?

Of course it could, partly because the SEC has pretty much given up. Our southern friends always take time off now to rest up, and I’m not even kidding. Here are some SEC matchups this weekend, and I only made two of them up: Alabama-Chattanooga, Georgia-Louisiana Lafayette, Texas A&M-Texas San Antonio, Tennessee-USDA, Kentucky-Austin Peay, Auburn-Alabama A&M, and Florida-Auburn A&M.

Kinda disgusting, actually. The SEC is like the former hotshot playboy who still patrols the clubs with his hairpiece slightly askew and his fly open, looking vaguely like Gary Busey.

But enough about the little guys. The big boys of ESPN’s “College GameDay” will be in Kalamazoo where 10-0 Western Michigan will face a Mid-American Conference opponent yet to be determined, as far as I know. And that means the Broncos need to act like they’ve been there before, even though they haven’t. I’m speaking to you, Bronco fans. Yes, during the ESPN broadcast you should loudly chant P.J. Fleck’s trademark “Row the boat!”, but do so fully clothed with minimal slurring.

It should sound like this: “ROW THE BOAT! YAY!”

It should not sound like this: “SHHHROW THE BOATH AND KICK THOSSSHE *&$%#*# IN THE DIIIIINGHY!”

It’s a minor but notable difference. And frankly, it’s less complicated than the Big Ten and national playoff chases.

Indiana at Michigan: The Hoosiers haven’t won in Ann Arbor since 1967, even before Bo arrived, and shortly after a certain News beat writer settled into her job. The Wolverines are fond of saying they have their fate in their own hands, and they’re strongly advised not to drop it, especially on third-and-long. Michigan 37-8

Ohio State at Michigan State: Michigan State received its Rutgers vaccine shot and is feeling a bit better, helped by LJ Scott, a leading November Heisman candidate. There’s no truth to the rumor the Buckeyes are flying in Ezekiel Elliott to pick up the carries he missed last year. Also no truth to the rumor the Buckeyes plan to win 62-3 for the third consecutive week. Ohio State 61-3. (Real pick: Ohio State 41-13)

Buffalo at Western Michigan: This is the biggest event in Kalamazoo since “I’ve got a Gal in Kalamazoo” hit No. 1 on the charts in 1942, back when Lee Corso first donned a team’s headgear during ESPN’s “GameDay” radio broadcast, brought to you by Woolworth’s. The Broncos have a great tandem in quarterback Zach Terrell and receiver Corey Davis, who along with P.J. “Just P.J.” Fleck have put Where’s Waldo Stadium on the map. Western Michigan 52-10