Ilitch competed only if he thought he could win, and against daunting odds, the man won just about everything.

Detroit Tigers owner Mike Ilitch sits for a portrait in the dugout at Comerica Park, June 29, 2005. Ilitch, who founded Little Caesars and went on to purchase the Detroit Red Wings and the Detroit Tigers died, February 10, 2017, at the age of 87. David Guralnick, The Detroit News
Fullscreen 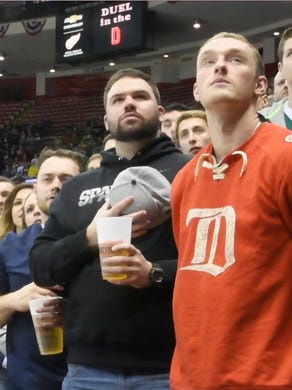 College Hockey fans pause for a moment of silent reflection on the death of Mike Ilitch, founder of Little Caesar's Pizza and owner of the Red Wings and Tigers sports franchises. Ilitch was honored with the moment of silence at Joe Louis Arena, home of the Red Wings, during a Michigan vs. Michigan State college hockey game on Friday, February 10, 2017. (David Guralnick, The Detroit News) David Guralnick, The Detroit News
Fullscreen

The marquee at the Fox Theatre pays tribute to the late Mike Ilitch, who died today, Friday, February 10, 2017. Ilitch was the owner of the Detroit Red Wings and the Detroit Tigers and founder of Little Caesars Pizza. Todd McInturf, The Detroit News
Fullscreen

Red Wings team owners Mike and Marian Ilitch stand at the Zamboni entrance waiting for the team photo to be taken on the last day of the 2007- 2008 season. David Guralnick, Detroit News
Fullscreen 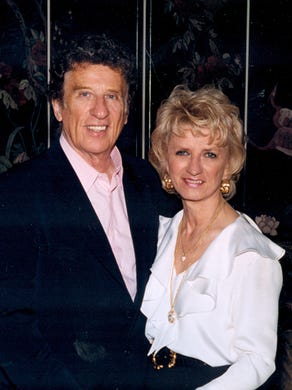 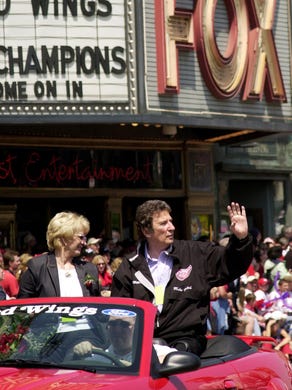 Marian and Mike Ilitch rode an open car in the Red Wings victory parade near the Fox Theatre in Detroit on June 17, 2002. Detroit News
Fullscreen 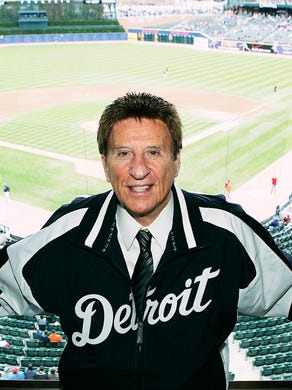 Red Wings owner Mike Ilitch gives a thumbs up to the crowd with his wife, Marian Ilitch, at the Red Wings Stanley Cup championship celebration at Hart Plaza in Detroit on June 6, 2008. Robin Buckson, The Detroit News
Fullscreen 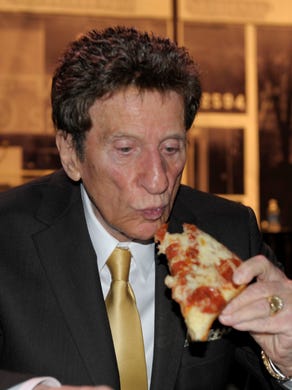 Tigers owner Mike Ilitch pumps his fist as he congratulates Tigers ace pitcher Justin Verlander during the clubhouse celebration after the Tigers beat the New York Yankees 3-2 in Game Five of the ALDS to advance to face the Texas Rangers in the ALCS in the Bronx, New York, October 6, 2011. John T. Greilick, The Detroit News
Fullscreen

Tigers owner Mike Ilitch raises his fist before receiving the American League Championship Series trophy with Tigers president and general manager Dave Dombrowski before the Tigers take on the New York Yankees in Game 4 of the ALCS at Comerica Park in Detroit on Oct. 18, 2012. Robin Buckson, Detroit News
Fullscreen

Mike Ilitch, owner of the Detroit Tigers and the Detroit Red Wings, was awarded the Joe Louis Brown Bomber Jacket at the Doubletree Hotel in Detroit, June 20, 2012. Ricardo Thomas, The Detroit News
Fullscreen

Team owners of the Detroit Red Wings Mike and Marian Ilitch hold the Stanley Cup trophy up over their heads during the Stanley Cup Finals game against the Washington Capitals at the MCI Center in Washington, D. C.. The Red Wings defeated the Capitals 4-1. Robert Laberge, Getty Images
Fullscreen

Mike Ilitch reacts as he and his wife Marian were honored on Friday, Oct. 30, 2015, for their $40 million gift for the construction of a state-of-the-art business school next to the new Detroit Red Wings arena. Max Ortiz, The Detroit News
Fullscreen

This is an artist's rendering of the Mike Ilitch School of Business, Wayne State University. Olympia Development of Michigan
Fullscreen

Tigers owner Mike Ilitch, right, answers a question from the media next to pitcher Jordan Zimmermann during the press conference at the Tiger Club at Comerica Park in Detroit on Nov. 30, 2015. Robin Buckson, Detroit News
Fullscreen

Detroit Tigers owner Mike Ilitch discusses the season and the upcoming playoffs during an interview in his office at Comerica Park, Sept. 28, 2011. John T. Greilick, The Detroit News
Fullscreen 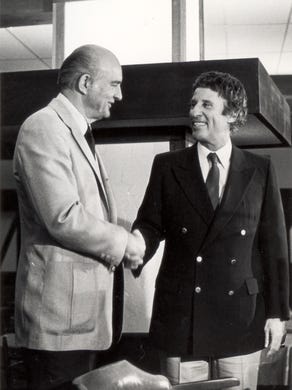 Mike Ilitch, the new owner of the Detroit Tigers, proudly displays a jersey presented to him on Wednesday, Aug. 26, 1992 at Tiger Stadium in Detroit after he announced he had purchased the team. AP
Fullscreen

Little Caesar Enterprises, Inc. founder Michael Ilitch (C) hands out a slice of pizza which baked by the Little Caesars Love Kitchen, a mobile pizza kitchen, to an unidentified woman as Deputy Under Secretary of Veteran Affairs Gordon Mansfield (R) looks on in front of the Department of Veterans Affairs building September 17, 2007 in Washington, DC. The Love Kitchen was in town to provide hot pizza meals to homeless people including homeless veterans. Little Caesar's founder Michael Ilitch was awarded with the Secretary's Award Monday by the Department of Veterans Affairs to recognize his support of veterans. Alex Wong, Getty Images
Fullscreen

Detroit — Before all the others came, before a Detroit revival could even be imagined, Mike Ilitch was here. He was here making pizza and making plans, seeing possibilities where others saw hopeless projects.

Ilitch competed only if he thought he could win, and against daunting odds, the man won just about everything, short of that coveted World Series championship. He turned the Fox Theatre into a gem, turned the Red Wings into champions, turned the Tigers from a woeful franchise into a consistent winner. He turned a solitary pizza joint into a billion-dollar enterprise, and used that wealth to build more and spend more.

From common roots as a Tigers minor-leaguer, Ilitch accomplished the most uncommon things, and the legacy he carved is evident everywhere. Ilitch passed away Friday at the age of 87, out of the public eye for about a year as his body failed him. Around Joe Louis Arena in recent days, workers talked solemnly, hoping “Mr. I” would make it to see the completion of Little Caesars Arena.

As tributes poured in from across the sports and business worlds, the family said there would be a private funeral and a public memorial service at a date to be determined. It will be a somber farewell for one of Detroit’s giants, a man practically as large as his city itself.

Ilitch was all-business, all-competition, and most important, all-Detroit, along with his wife Marian and his large family. After capturing four Stanley Cups as owner of the Wings, Ilitch spent his final years spending enormous amounts on the Tigers in a desperate last-gasp chase for a championship. The Tigers reached the World Series in 2006 and 2012, and despite suggestions of a payroll cut this year, they essentially brought the band back for another go. No one has confirmed the core was kept intact because Ilitch wanted another shot, but he loved his stars, and there’s no way he was trading Justin Verlander or Miguel Cabrera. One of the last times Ilitch met with the media was in 2015, when he signed Jordan Zimmermann to a $110-million contract. The owner was as feisty and passionate as ever, joking he still had more money in his pocket.

“We’ve been in the World Series, and that gets old,” Ilitch said at the news conference. “You want to win. That’s all I think about. My wife’s got to put me in bed and tell me, ‘It’ll be OK Mike, it’ll be OK.’”

He once told me his life would be incomplete if he didn’t bring Detroit its first World Series title since 1984. It was one of the few reclamation projects he didn’t quite complete, but my goodness, when the competitive button was pushed, he never stopped.

After the Tigers lost 119 games in a disastrous 2003 season, Ilitch was doubly driven, and started signing stars such as Pudge Rodriguez. Just three years later, the Tigers were in the World Series and favored to win it, but lost to the Cardinals in five games.

Pro sports are a brutal business, with no guaranteed success and plenty of risk. Before the Wings started capturing Cups in 1997, there were few winning images of Detroit, in the streets or the suites. Before Dan Gilbert and others dived into Detroit’s renaissance, Ilitch was here, almost single-handedly changing the city’s perception.

In my last in-depth interview with him in 2011, he talked about the vision that was forming, about the new arena and developments that would be coming. Today, Gilbert’s QLine streetcars are ready to roll along Woodward, connecting the city with the growing District Detroit, and at least Ilitch witnessed the makings of it.

It wasn’t so easy to see when we chatted in his Comerica Park office in 2011. I asked then if it pained him to see Detroit still struggling, and he leaned back and waved it off.

“Well, there’s not gonna be much pain very long,” he said. “We got a lot of great people now, Compuware (Peter Karmanos), the guy that bought all the buildings, Dan Gilbert, Blue Cross-Blue Shield. There’s a whole group that’s gonna come together, like it or not. It’s just kind of forming, like osmosis, but it’s gonna happen.”

And there, in the midst of Detroit’s catastrophic financial woes, Ilitch’s pride glimmered.

“You know, we catch heck when you mention where you’re from, but people are gonna recognize we can change that,” he said. “The start of it will be the teams. We’ve got the best sports fans, we’re a sports city, nobody can deny that. Then the business thing is gonna follow it nicely. What I’d like one day -- and I won’t be around for it — is that they can eat their words about what they said about Detroit. Because Detroit’s gonna come back.”

So he was right on all fronts. Detroit’s revival is being driven by business leaders who embrace the fierce competition of sports, and sadly, he won’t be around to see the results.

Gilbert owns the Cleveland Cavaliers and huge chunks of downtown Detroit, and might be interested in owning the Tigers, although Christopher Ilitch, president and CEO of Ilitch Holdings, hasn’t said if the team will be for sale. Tom Gores has joined the movement, bringing the Pistons downtown to share the arena with the Wings, and he shares big soccer plans with Gilbert.

Do you think any of this would’ve happened if Ilitch hadn’t envisioned it? When we spoke that day in 2011, he was animated and lively. He leapt from his chair at one point to demonstrate Cabrera’s batting stance and show why he’s such a great two-strike hitter. You could see it then, and I wrote it then: There’s no place Mike Ilitch would rather be, in the belly of his ballpark, in the heart of his city, in the heat of a playoff chase.

Nothing could extinguish his competitive fire except mortality itself, the one battle he knew he couldn’t win. Ilitch was an ordinary man, a true fan himself, who did extraordinary things. And his greatest legacy is not the trail of success he leaves behind, but the path that lies ahead for others to complete.