Wojo: For Mike Ilitch, a full life, a fulfilled vision 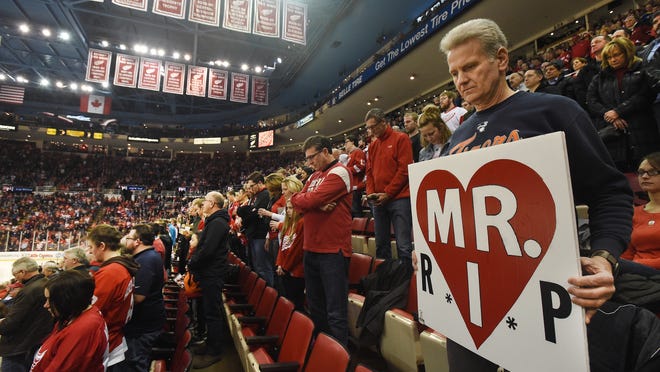 Detroit — He had fame and good fortune, reflected in the gleaming lobby of his beloved Fox Theatre, where the flag-draped casket sat at the bottom of the staircase. One final time, Mike Ilitch was surrounded by evidence of an enriched life, as just outside the door, a short distance down Woodward, Little Caesars Arena continued to rise from once-desolate city blocks.

But this day was not about that. This was about family and fans, and the inextricable link between them.

Mourners filed into the Fox throughout much of Wednesday, waiting 30-45 minutes in the main theater before being ushered into the grand lobby. Red Wings players and other employees of Ilitch Holdings visited earlier in the morning, and then at noon, it was the fans.

There were women in long fancy coats and men in Red Wings jackets. There were construction workers who took off their hard hats as they paused in front of Ilitch’s casket. To the side, members of the Ilitch family — sons Christopher, Mike Jr., and Atanas, daughter Denise and all sorts of grandchildren — thanked the people for coming.

This was not a memorial with speeches by dignitaries, but a common gathering, the way Ilitch would’ve liked it. It continued into the evening before the Wings lost to the Blues at Joe Louis Arena, where a red “Mr. I” is now embedded in the ice and stitched onto the players’ sweaters. As Wings great Nick Lidstrom and others watched from the press box, there was a moment of silence, then a moving video tribute, and finally, a prolonged standing ovation.

It was a day of remembrance, not remorse, and it was impossible to put Ilitch’s legacy in proper perspective. Tom Wilson had a unique perspective, having long worked for the Pistons and Bill Davidson at the Palace, the Ilitches’ chief competitor. In 2010, after Davidson died, Wilson joined the Ilitches as president and CEO of Olympia Entertainment, and was one of the key people in the arena project.

Wilson witnessed both sides — as competitor and compatriot — and marveled at what he discovered.

Ilitch leaves behind 'greatest legacy you could have'

“You never really know a person until you work with them, and I can tell you, his devotion to the fans was not an act, his competitiveness certainly was not an act,” Wilson said. “We used to sit up north (in Auburn Hills) and be astonished about his commitment to the city, because it was in difficult times economically and politically. It would be so easy to just come out to Oakland County, and we’d say, why doesn’t he go to the suburbs? That was the mystery. I didn’t totally appreciate what he was doing at the time.”

You’ve heard countless stories since Ilitch passed away at 87 about his passion, in business and sports, winning four Stanley Cups and turning the Tigers competitive again. But at the final farewell, no trophies were needed. The montage on the giant screen in the Fox was dominated by photos of family, of the Ilitches and their seven children, not by images of celebrating teams.

On one side of the screen was a picture of young marine Mike Ilitch. On the other side was a portrait with his wife of 61 years, Marian. As the fans filed through, they didn’t talk about Stanley Cups and World Series appearances, but of their personal interactions, however brief, however long ago.

Mike Kowalczyk, 58, from White Lake Township, has a son who played for Little Caesars in the ’90s. He recalled attending a Wings playoff game in 1998 and sitting on the stairs near Ilitch’s suite. Ilitch famously preferred to sit alone, or with Marian, in a cordoned-off area so he could let his passion fly.

When the Wings scored a goal, Kowalczyk loudly cheered, and caught Ilitch’s attention.

“He looked down at me and said, ‘Who’s yelling out there?’ ” Kowalczyk said. “And then he invited me into his suite. I was nervous, almost intimidated, but he was like anybody else in the stands. He was one of us.”

Stories abound of Ilitch’s simple acts of generosity, from the small to the poignant, such as the revelation he paid Rosa Parks’ rent in downtown Detroit for many years. When asked for a single word to describe Ilitch, Wings captain Henrik Zetterberg said “kindness,” and that’s been echoed for days. The players were like his kids, and he treated them well. But the fans were the ones he most had to please, and Ilitch was never more joyous than when announcing the signing of another hockey or baseball star.

“People who knew him far longer than I did will tell you how extraordinarily thoughtful he was,” Wilson said. “I always heard him say, don’t mistake kindness for weakness. You don’t build great companies without having a degree of toughness. If you look back at sort of the lost causes he adopted — everybody gave The Fox up for dead, everybody gave the city up for dead, and at the time, people walked away from the Tigers and Red Wings. It takes a special person to go in and say this is important to me, this is important to the city.”

Although a private guy, almost shy, Ilitch could be boisterous and fun in social settings. Among media members he knew, he’d ask what the fans were talking about, what they liked, what they didn’t like. When you start a billion-dollar empire with one pizza restaurant in Garden City, you learn to care what the customers say.

“He started so many conversations with, the fan, the fan, the fan,” Wilson said. “He’d be talking about the new arena and he’d ask about sight lines and the ease of getting to the seats. He’d ask, ‘How do we get the team closer to the fans?’ ”

They were right there at the end, some placing a trembling hand on the casket, others eager to tell a story to one of Ilitch’s children. In the theater, Frank Sinatra’s voice sang gently, “I’ve lived a life that’s full …”

Ilitch’s way was an everyman’s way, and the words on the memorial card summed it up: “A Life Well Lived.” It was a full life and a fulfilled vision, celebrated equally by those who know him well, and those who felt they did.