This is not a revelation to some, but it’s especially disconcerting to discover I don’t know anything about college football. 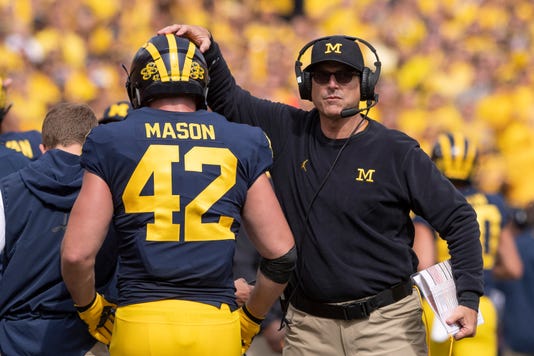 This is not a revelation to some, but it’s especially disconcerting to discover I don’t know anything about college football. I don’t know if Michigan or Michigan State are actually any good. I don’t know why Alabama is so good and yet is playing one of the itty-bitty Louisianas this week (Lafayette, or perhaps American, not sure).

Targeting? No idea what it is. It appears to be a random penalty enforced when one player strikes another too meanly, using the wrong piece of equipment directed at the wrong body part. Don’t ask me to name the equipment, or the body part.

From what I understand, there are four winless teams in college football: UCLA, Nebraska, San Jose State and UTEP. This makes half-sense. There are 20 unbeatens, including Duke, Kentucky, Syracuse and Cincinnati. This makes no sense. Is this FBS college football or the NCAA Final Four?

Call me old-fashioned, but I don’t want to live in a world where UCLA, USC, Florida State, Tennessee and Nebraska are crummy, and Old Dominion beats Virginia Tech for no apparent reason. In the Big Ten, I don’t know who’s any good in the West Division, or who’s currently coaching Maryland, or who’s supposedly coaching a Rutgers team that keeps getting its Ash kicked in.

I mean, can anyone say for certain whether Michigan (3-1) is ready to launch a title run, or is again busily devising innovative ways to lose to Michigan State and Ohio State? The Wolverines humiliated Nebraska last week, treating the former power like it was the poor New England Patriots or something. But as you know, Michigan cannot legally, morally, or ethically be granted legitimacy until it beats a team with a rank numeral in front of its name.

More: Niyo: History tells us beasts of Big Ten aren’t out of playoff mix yet

This week, the Wolverines go on the road to face Northwestern, and it would be quite a test if Northwestern wasn’t suddenly acting all Northwesterny again, suffering injuries and inexplicable defeats. The Wildcats (1-2) fell at home to Akron and Duke, so even if the Wolverines win by, say, 56-10, they’ll be scorned anew for not beating Notre Dame 56-10.

This isn’t totally fair because I think Michigan might turn out to be pretty good, although with that statement, you’re welcome to revisit the first line of this column. The Wolverines have scored at least 45 points in three straight games, and it’s not like they played Nebraska three straight times.

But Michigan’s season technically doesn’t start until Oct. 13, when it enters a four-week gauntlet against Wisconsin, Michigan State, Bye and Penn State. Unless the Wolverines win all three by multiple touchdowns, and land multiple five-star recruits on the bye, Jim Harbaugh will be dragged back to the imaginary hot chair.

Nobody knows nuthin’, which is why college football is great unless you’re a coach, or an athletic director, or a gambler, or an NCAA investigator, or a referee who couldn’t distinguish a target call from a Target sale. It’s so confusing these days, trying to learn all the penalties and transfer rules, while simultaneously trying to figure out when Urban Meyer is telling the truth.

Clemson just lost quarterback Kelly Bryant, who decided to transfer after realizing he might have to play Alabama again. And truly, this is the only thing we know for sure: Alabama is the best team with the best quarterback, although please don’t ask me to spell his name. This might be Nick Saban’s greatest squad yet, winning by an average of 41 points. Some teams don’t score 41 points in a month, and they’re not all named Rutgers.

Much of the credit goes to quarterback (deep breath) Tua T-a-g-o-v-a-i-l-o-a (whew!), who possesses a staggering array of runs, throws, consonants and vowels. Correct pronunciation of first name: Too-wow-uh. Some of the credit also goes to Alabama’s wimpy schedule, which features only three currently ranked teams. The Louisiana-Lafayette Ragin’ Cajuns are 1-2 and 49-point underdogs Saturday, and will be done Ragin’ approximately 90 seconds into the game.

The biggest contest of the weekend is in Happy Valley, where Penn State will stage its famous “Whiteout” against the Buckeyes. Oddly enough, whiteout also was heavily used by The Ohio Statement University while putting together its Meyer Manifesto. This is a chance for the Big Ten to showcase itself on a national stage, as opposed to burping up its lunch on a national stage. These are the last two undefeated teams in the conference, so the winner will immediately be expected to lose to an unranked opponent to ensure the Big Ten doesn’t soil the playoff party.

Believe it or not, Michigan and Michigan State are still in the playoff conversation, if the conversation is taking place in a poorly ventilated room that was freshly painted. But seriously, everyone’s still in it, as far we know, which we don’t.

Northwestern just lost its best player to injury and Michigan is playing angry, like someone insulted its helmets. So everyone knows the Wolverines should win 56-10, except that everyone knows nuthin’.

■ Ohio State at Penn State: It’s a top-10 showdown in the raucous “Whiteout” atmosphere, easily the biggest home game for the Nittany Lions in a long time, at least since Appalachian State four weeks ago. These are the top two offenses in the country, averaging about 55 points per game, so naturally the final score will be 14-10. Actually, that might be the score five minutes into the first quarter. Pick: Ohio State 45-35

■ Central Michigan at Michigan State: Finally, we should gain some clarity about the inconsistent Spartans, as they face their fiercest, most-competitive in-state rival. The Chippewas used to beat Michigan State regularly, but not in nine years, so the pressure is mounting to end that unacceptable drought. It won’t be easy, because the Spartans apparently have learned how to handle Little Cousin. Pick: Michigan State 42-10

■ Stanford at Notre Dame: We thought we had Notre Dame figured out after quarterback Brandon “Thurston” Wimbush III ran all over Michigan in the opener. But then Irish coach Brian “Chip” Kelly switched to Ian Book, and he looks capable of throwing the record Book out the window. The loser between these 4-0 teams drops out of the playoff picture, until it re-emerges in a month. Pick: Notre Dame 27-20

■ Louisiana-Lafayette at Alabama: Nick Saban begged people to say bad things about him and his team, to keep them humble. OK, I got something. If Alabama is so darn formidable, why does its mushy non-conference schedule feature Arkansas State, Lafayette, The Citadel and Nebraska, and only one of those is made up? Also, Saban clearly gets a weekly dye job from his hair-stylist, and probably a pedicure too. Pick: Alabama 56-10