Wojo’s Pigskin Picks: For angry Wolverines and Spartans, it’ll never be over

Wojo’s Pigskin Picks: For angry Wolverines and Spartans, it’ll never be over 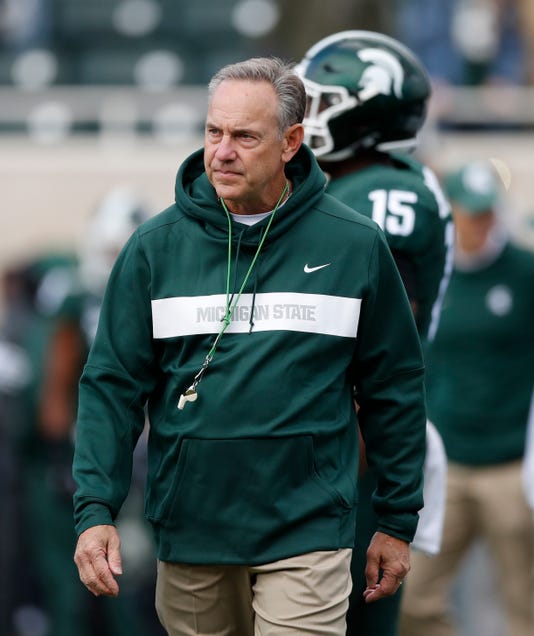 All right everybody, settle down, settle down. Can we please move on from #Bushleaguegate, #Stormtroopergate, #94yardstotaloffensegate and resume our normal mundane lives?

It’s been six days since Spartan heads were stomped upon in a vicious and ruthless manner in Michigan’s 21-7 victory, and blurry, controversial videos are still emerging. I recently found one in which Mark Darthtonio is seen desperately exhorting his troops to convert first downs — “May the Fourth be with you!” — while the Star Wars theme blares over the Spartan Stadium sound system.

I might have made that up, but at this stage, who cares? It’s gotten so wonderfully ridiculous, we’ve buried the main point. The main point is, Jim “Jedi” Harbaugh is finally doing things we expected — marching the Wolverines (arms not locked) toward a possible Big Ten title, soundly beating teams not named “Rutgers” or “Indiana,” treating rivalries with the attention and respect they’ve richly earned.

We are not condoning the silly fake-macho behavior that preceded last week’s rivalry clash. (OK, we sort of are.) And we are not going to belabor the issue, except for this column, and then perhaps one more column, and then maybe another, and then dozens more next season.

More: View from the other side: Michigan State vs. Purdue

Lost in the furor is that Michigan State’s season now teeters precariously at 4-3, with Purdue coming to town as a suddenly, inexplicably relevant opponent. I’m not saying the Spartans are ramping up their show of force. I’m just saying a shipment of lightsabers reportedly arrived in East Lansing late Wednesday night.

It’s important for the Spartans to get their heads straight, because if they try their “clotheslining” tactic against Purdue, they’re unlikely to dislodge the enormous skull of renowned mascot Purdue Pete. The Spartans don’t have the luxury of a bye this week, as Michigan does, but that hasn’t stopped both sides from offering starkly different accounts of that fateful Saturday.

Spartans version: We were walking stoically into the stadium as we do before every home game, and we decided just for fun to wear helmets this time and arrive just a teensy bit late.

Wolverines version: A few of us were doing our normal stretching near midfield when the sky clouded over and a phalanx of armored men approached in a threatening manner.

Spartans: We had sent an advance scout across the line to politely inform the enemy to get the *&$% out of the way.

More: Trieu: Versatile Aaron Young will be a 'throwback-type' player for Michigan State

Wolverines: They advanced upon us with little warning, arms locked, and began randomly clotheslining, sending bodies to the turf and nearly damaging an expensive set of headphones.

Spartans: That’s a lie. We only use clotheslines to air dirty laundry. Next thing we knew, there was some Bush-league guy throwing a tantrum and tearing up our beloved midfield Spartan logo.

Wolverines: Oh we barely scuffed it, and you guys are good at lawn care anyhow. It wasn’t the last Spartan head we tore up, that’s for sure. Besides, your coach was standing right there, smiling.

Harbaugh: That was an orchestrated attempt to intimidate with a band of stormtroopers, just like you’ve done to our program eight of the past 10 years. We’d had enough!

Apparently, Big Ten commissioner Jim “Darth Maul” Delany had enough too, and yelled at Dantonio, Harbaugh and Devin Bush, while slapping a $10,000 fine on Michigan State. It’s unclear if the punishment was for marching into the stadium in a menacing way, or marching for a mere 94 yards in the actual game. Delany did resist the temptation to fine the Wolverines for “excessively jumping up and down” and “handling Paul Bunyan in a reckless manner” after the victory.

Now Michigan (7-1) is rolling and could be in position to reach the playoff and finally get that coveted 38-0 loss to Alabama. The Spartans, meanwhile, are hurting, and make no mistake, that was a factor against Michigan. If not for injuries, Michigan State almost assuredly would have completed at least nine of 25 passes.

Listen, this is what rivalries are supposed to look like, needlessly nasty and soaked with unflattering stereotypes, and sometimes the Empire does strike back. There was no major harm, thankfully, and if Michigan offers to pay $9.95 for a can of white spray paint to repair the logo, it should be settled.

The Spartans should be more concerned about a 4-3 Purdue team that just thrashed Ohio State and is actually pretending like it might reach the Big Ten championship game. This would be extremely funny, except that Purdue’s passing offense ranks sixth in the country, while Michigan State’s passing defense is 115th. The Boilermakers have a prolific quarterback in David Blough, a major reason they’ve stopped bloughing.

Iowa at Penn State: The 6-1 Hawkeyes are one of several middlin’ teams in contention in the Big Ten Waste Division. Meanwhile, Penn State is reeling, and James Franklin reportedly has been looking ahead to next week’s Michigan game by relentlessly practicing fourth-and-5 plays. The electricity is fading for the Nittany Lions, who were forced to change this game from a White-Out to a Brown-Out. Pick: Iowa 27-23

Navy vs. Notre Dame (in San Diego): The Fighting Irish are starting to act kind of serious about this whole playoff possibility. They’re 7-0, ranked No. 3 and don’t face a top-25 opponent the rest of the way. They also have only one more home game. They also have approximately 98.3 percent of college football rooting for them to lose. Pick: Notre Dame 37-20