Wojo: In painful rebuild, Tigers still looking for a centerpiece

The Tigers are selling a narrative and buying time, and most observers understand it and accept it — for now. But, for how long?

Wojo: In painful rebuild, Tigers still looking for a centerpiece 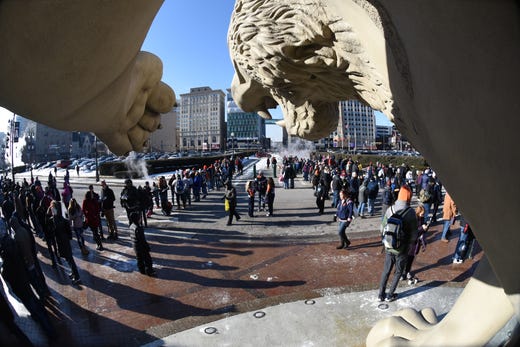 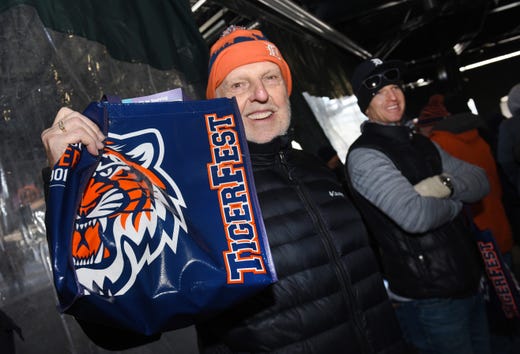 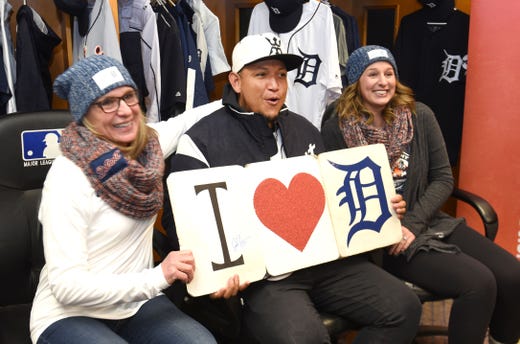 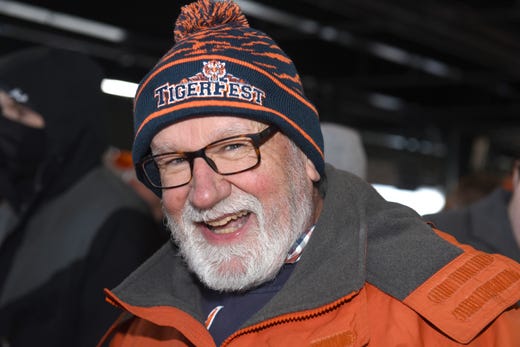 A fan wears his Miguel Cabrera jersey outside Comerica Park for TigerFest 2019 in Detroit on Saturday, January 26, 2019. Max Ortiz, The Detroit News
Fullscreen 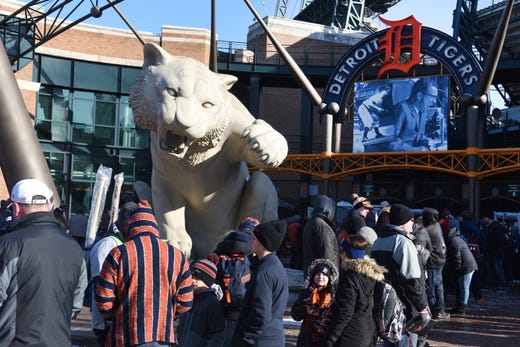 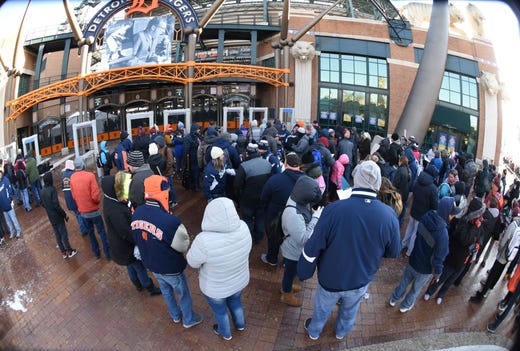 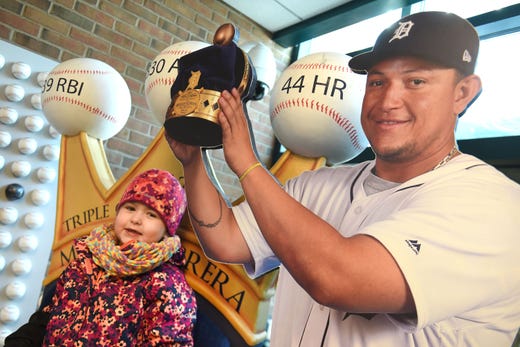 Emersyn Condon of Middleville enjoys posing with a cut out of her hero Miguel Cabrera during TigerFest 2019 at Comerica Park. Max Ortiz, The Detroit News
Fullscreen 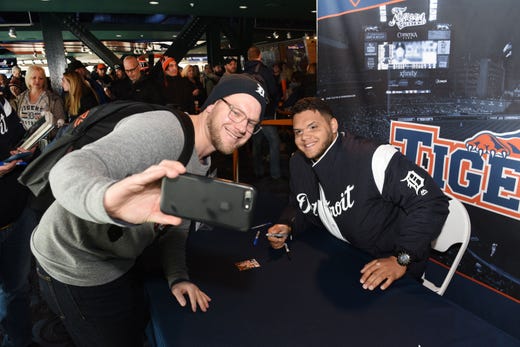 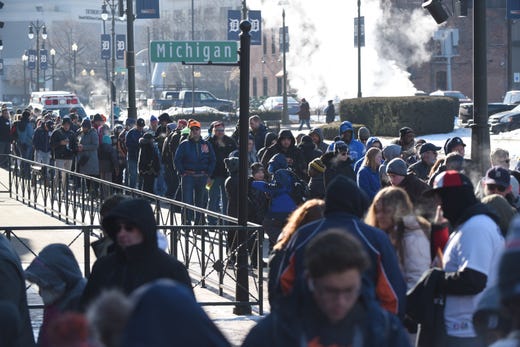 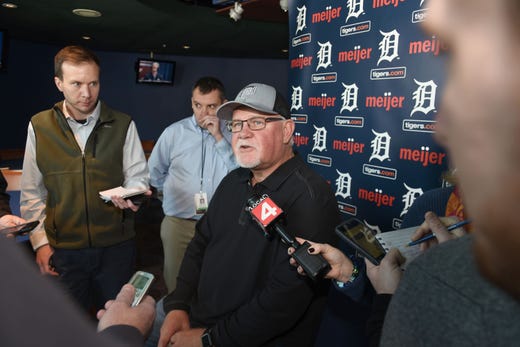 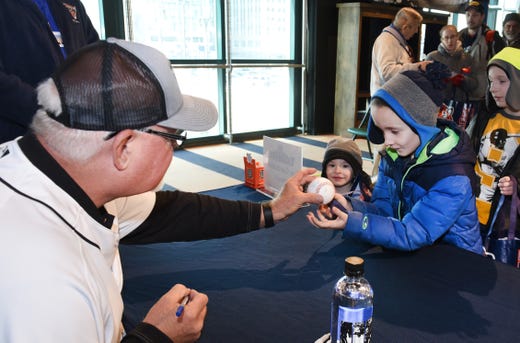 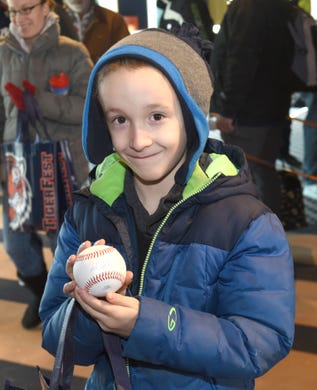 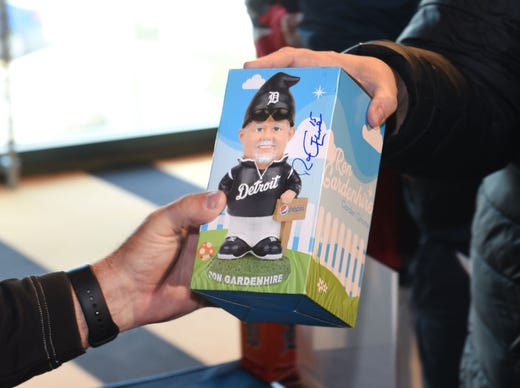 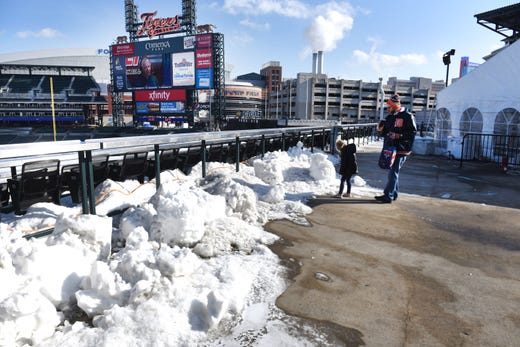 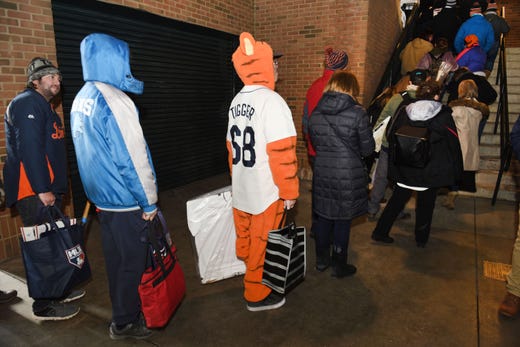 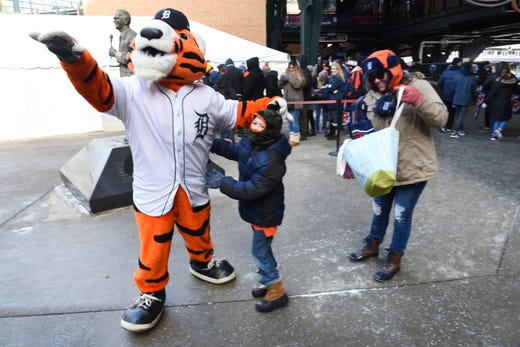 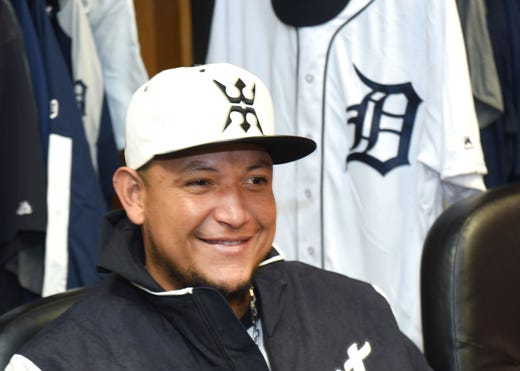 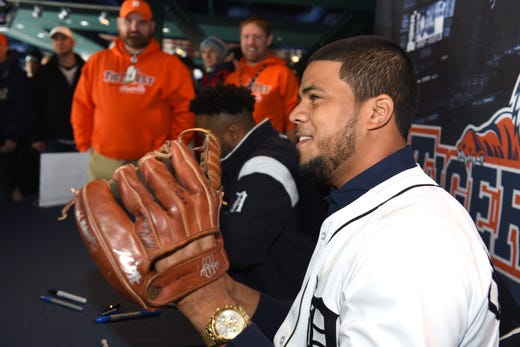 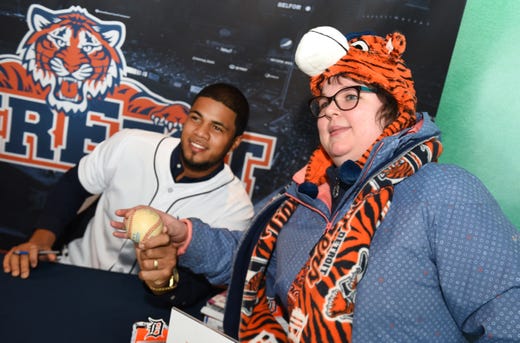 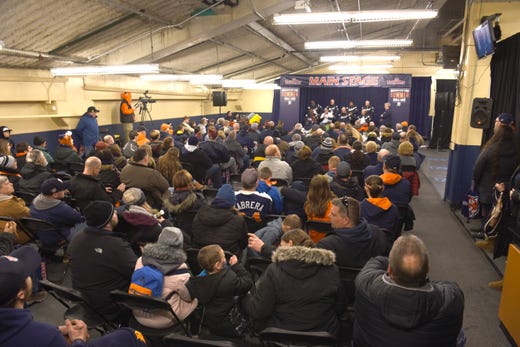 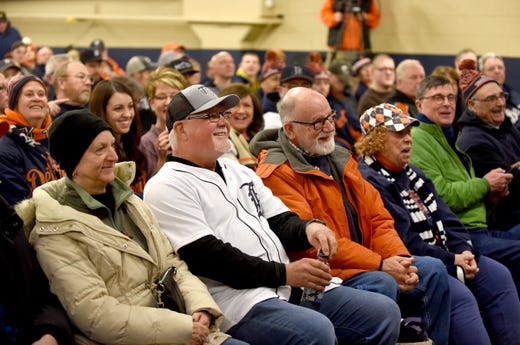 Detroit Tigers head coach Ron Gardenhire sits in the crowd for a moment before taking the main stage for a coaches question and answer session at TigerFest 2019. Max Ortiz, The Detroit News
Fullscreen 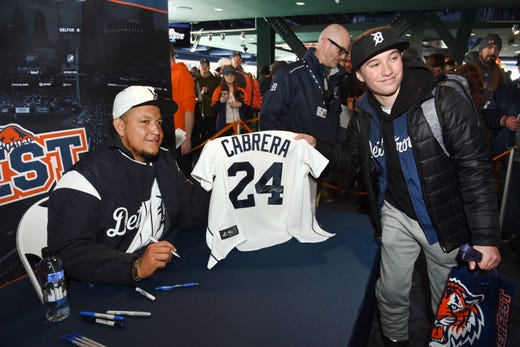 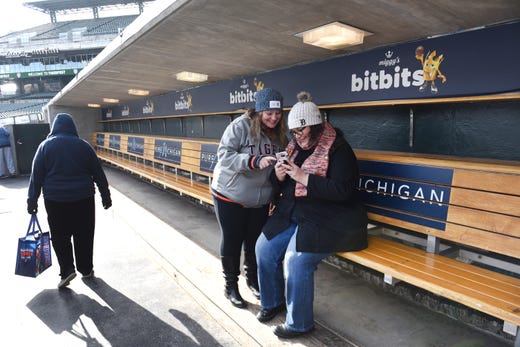 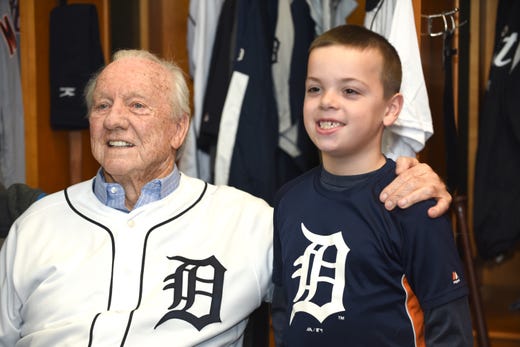 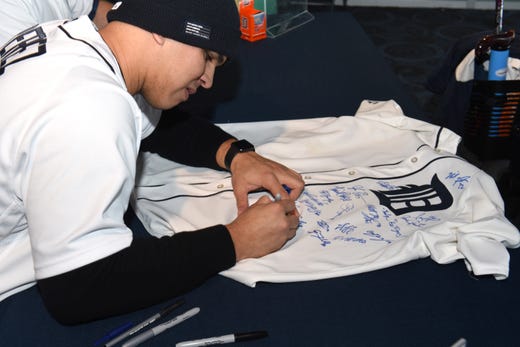 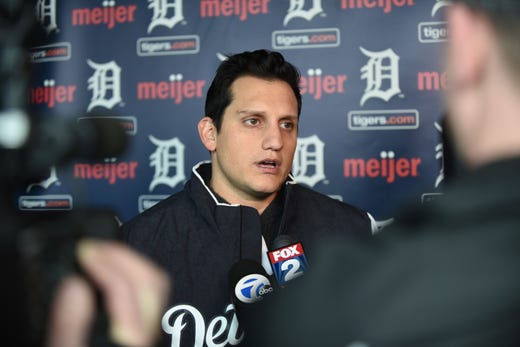 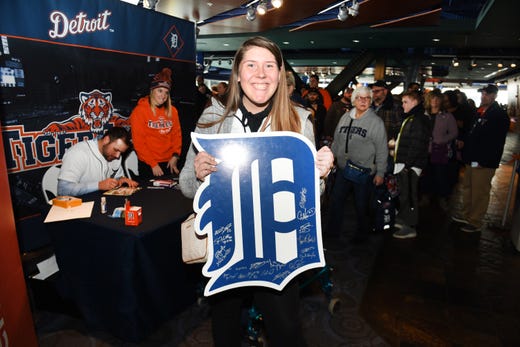 Kayelee Dunn of Jackson shows off her signed big D during TigerFest 2019 at Comerica Park in Detroit on Saturday, January 26, 2019. Max Ortiz, The Detroit News
Fullscreen 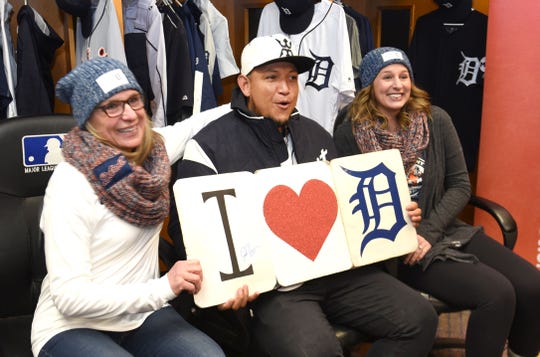 Detroit — The Tigers are selling a narrative and buying time, and most observers understand it and accept it — for now. But, for how long?

Rebuilds in pro sports are ugly, often unavoidable, seldom brief. Generally, fans will be patient, under one condition: They see promising pieces of the future.

This is where the pressure will rise on Tigers GM Al Avila, and this is when it’ll hit — in less than two years. No, the Tigers won’t be pennant contenders by 2020, but they can’t be another 90-plus-loss team. They can’t be plugging in veterans just to fill out the roster. They can’t be talking about all the young arms in Toledo and Erie, as they’re forced to do now, with spring training a couple weeks away.

Fittingly, 2020 will be the year for hindsight. By then, guys such as left fielder Christin Stewart, third baseman Jeimer Candelario, center fielder JaCoby Jones and catcher Grayson Greiner have to be established as legitimate major-leaguers. Some of the Tigers’ prime pitching prospects — No. 1 pick Casey Mize, Beau Burrows — need to be close to ready. Just loudly declaring a rebuild, as Avila did two years ago, doesn’t buy years of scrutiny-free development.

Light in the tunnel

The Tigers have posted back-to-back 64-98 records after a decade of contention, and aren’t likely to be much better this season. Similar to the Ilitches’ other team, the Red Wings, there’s a decent stock of fan goodwill because both franchises spent a lot and won. As soon as that goodwill dwindles, the real spending must resume. And the real spending can’t resume until the prospects turn into players.

There are clear parallels between the Tigers and Wings, and the perception is, the Wings are way ahead in their rebuild. They are, but you know what’s curious? The Wings are two points from the worst record in the NHL, and yet it feels like it’s starting to work, doesn’t it?

That’s because potential has morphed into promising players — Dylan Larkin, Andreas Athanasiou, Anthony Mantha, Tyler Bertuzzi — a transition that hasn’t happened yet with the Tigers. Wings GM Ken Holland has steadily traded veterans for draft picks, stoking the interest and stocking the minors. It took him a while to spit out the word “rebuild,” but if you’re gonna do it, you can’t hide it.

“I don’t think anybody likes a rebuild,” Avila said during the Tigers Winter Caravan. “We feel we have a good young nucleus developing that’s going to be ready in a short period of time. Then when the time is right, obviously we’ll add to that. If you’re following the progress of our players, in the minor leagues and at the big-league level, I can see a light at the end of the tunnel.”

Prospects always sound encouraging, especially first-round picks, but you can’t tout a rebuild too long. The Wings are deep into their third consecutive playoff-less season, and like the Tigers (four straight playoff-less seasons), it’s about to get more critical. The Wings have restocked with first-round draftees Filip Zadina, Joe Veleno, Michael Rasmussen and Dennis Cholowski, although it’s too early to declare anyone a future star.

The Tigers have restocked the same way, in the same time frame, and it’s also too early to declare anyone a future star. The difference is, baseball fates are more unpredictable, which is why you have to pile up prospects and hope for a hit. 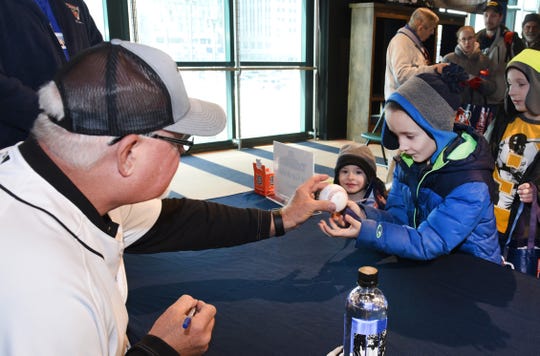 Nick Castellanos was once considered a cornerstone because of his potent bat. Now he’s on the trading block because of his weak glove and a pending payday. Michael Fulmer was considered perhaps the biggest piece in any rebuild. Now he’s coming off an injury-plagued season and about to be the first player to take the Tigers to arbitration since 2001.

Last year, Candelario was one of the few bright spots, a 25-year-old with some power, grabbed from the Cubs in the Justin Wilson trade. By the end of the season, he was worn out, and hit .224 with 19 home runs.

Unlike the Wings, the Tigers don’t have a cache of fresh faces ready to unveil and satiate the public. They have a few, and next year a few more, and they also need to unearth some surprises, like Niko Goodrum last season.

The Tigers long fielded one of baseball’s most-barren farm systems because owner Mike Ilitch and GM Dave Dombrowski dealt youth for immediate contention, and it nearly won them a World Series.

Ilitch’s passing in 2017 didn’t necessarily cause the dual rebuilds, but it spotlighted economic realities in both sports, and the importance of lower-priced, younger talent to balance aging rosters.

More: Tigers give utility man Kaleb Cowart a chance to remake himself as a pitcher

More: After physically and spiritually transformative offseason, Boyd ready to build on success

Now, after trading away Justin Verlander, J.D. Martinez, Justin Upton and others, the Tigers have a vastly improved farm system, with five players among the MLB Pipeline Top-100 prospects, all pitchers — Mize (18), Matt Manning (53), Franklin Perez (67), Alex Faedo (79), Burrows (86). The Tigers can sell possibilities, and not much more right now.

Mize might rise quickly, but don’t count on him this year. Same with Burrows, Manning and Faedo. By next season, someone has to emerge from that group. Perez might be the most tantalizing, but he’s only 21 and missed valuable time with a shoulder injury.

GMs hate to talk about timetables because if it takes longer, it looks like a failure. Avila did admit the 2021 season could be when Chris Ilitch and the team will be ready to spend more, coinciding with the end of Jordan Zimmermann’s huge contract. Miguel Cabrera, who’s back from a biceps injury and in good shape and good spirits, will be the Last One Standing, his contract running through 2023.

“After 2020, our payroll will be in a lot better place for us to be aggressive going into 2021,” Avila said. “At that point, we’ll have financial flexibility.”

The Tigers are nowhere near their previous payrolls of $200 million or so, but they hover around $100 million, middle of the pack. They’ve plucked a few inexpensive veterans — shortstop Jordy Mercer, pitchers Matt Moore and Tyson Ross — to try to be more competitive. Ron Gardenhire’s good-humored optimism endures, showing again why he’s the ideal manager to guide a club through difficult times.

But this still looks like a 95-loss team. Could the Tigers dip into the stagnant free-agent market, where all sorts of decent players remain available, possibly for a bargain? They could, and you might argue they should, within reason. But in a full rebuild, quick fixes seldom bring lasting results.

The Tigers signed pricey guys for many years, and the bill came due. That doesn’t mean they get forever to pay it off. They once had a Who’s Who of players, and now it’s a Who-the-heck-is-Who?

Fairly soon, they need several to reveal exactly Who they might be.