Wojo: For Harbaugh and Dantonio, a critical season beckons

For Jim Harbaugh and Mark Dantonio, this seems different, in its depth and its timing. More confidence. More forthrightness.

Wojo: For Harbaugh and Dantonio, a critical season beckons

Michigan and coach Jim Harbaugh, left, are the preseason favorite to win the Big Ten, while Michigan State and coach Mark Dantonio were picked to finish third in the East. (Photo: Carlos Osorio, Associated Press)

We’ve seen it before and heard it before. As a season nears, coaches talk positively, lay out lofty goals, stir up excitement.

But for Jim Harbaugh and Mark Dantonio, this seems different, in its depth and its timing. More confidence. More forthrightness. And for both, more to prove, or improve, or re-prove.

In their own ways, Harbaugh and Dantonio set similar tones during Big Ten media days in Chicago, and face similar tasks. Both have to show they can successfully update their offenses with new play-callers. Both are asked to fulfill high expectations that they created. Both have senior quarterbacks and talented defenses.

Michigan and Michigan State have enormous opportunities to alter perceptions and quell murmurs, and there’s no sense shrinking from it. There was Harbaugh Friday talking about this possibly being a “special” season, one day after he took a jab at Ohio State’s departed Urban Meyer. After praising Meyer’s “phenomenal” record, Harbaugh noted that controversy always follows, and there’s no debating that.

Was the remark a sign of Harbaugh’s confidence in his own team, or just an honest statement of fact, or a calculated chance to deride a rival that has dominated him? Yes, to all of it. It wasn’t a particularly good look, to poke after Meyer is gone, but it also wasn’t some nasty, unfounded revelation. It fit Harbaugh’s mood and motives, to invigorate a Michigan team that has wilted in big games.

Talk is cheap, of course. So are predictions, and Michigan was picked to win the Big Ten, something it hasn’t accomplished since 2004. To do so, the Wolverines almost assuredly will have to beat Ohio State for the first time since 2011. With key games at home — Michigan State, Ohio State, Notre Dame — Michigan has become a fashionable choice to reach the playoff for the first time.

If that seems like a lot for a program with question marks at running back and on a defense that sent stars to the NFL, well, Harbaugh would disagree. Did he mind being pegged as the favorite?

“I think that's where I would pick us,” he said, before expanding. “I feel like our team is in a really good place. Young, enthusiastic team with players with a lot of good experience. I feel really good about our coaching staff, and I feel like it's good, it's tight, and we're proceeding on a daily basis to make it even tighter, even better.”

Although Harbaugh is a solid 38-14, he’s 0-4 against Ohio State, 1-3 in bowls and 1-9 against top-10 teams. He’ll point out Michigan has the second-best Big Ten record behind Ohio State the past four years — actually, third-best, behind Wisconsin — but he knows that’s not good enough. He hired Alabama’s co-offensive coordinator Josh Gattis to install an up-tempo, no-huddle, run-pass-option offense to take advantage of Michigan’s skill at quarterback with Shea Patterson, and a batch of touted receivers.

Change was needed, accentuated by the 62-39 clobbering at Ohio State and the 41-15 Peach Bowl loss to Florida, and change was made. Three 10-3 marks in four years certainly isn’t bad, but it also isn’t progress, hollow without a victory over the Buckeyes.

Harbaugh draws loads of attention, which can overshadow a similar restructuring at Michigan State. And Dantonio also sounds like someone who thinks a special season is possible.

More: Dantonio grumbles as double-bye has MSU playing once in three-week span

I’m not sure Michigan State and Michigan can have special seasons at the same time because one has to beat the other. I am sure either one is capable of it. Dantonio is coming off a 7-6 record that featured a truly abysmal offense, and a truly great defense. The Spartans are 20-18 the past three seasons, after an incredible 36-5 stretch that featured two Big Ten titles.

The year before their Rose Bowl victory at the end of the 2013 season, the Spartans also went 7-6. Dantonio defies dire forecasts as well as any coach around. How much confidence does he have in his program? His response to fielding the 125th-ranked offense was to fire no one and add no one to his staff. He shuffled responsibilities, giving the coordinator position to quarterbacks coach Brad Salem.

And there was Dantonio in Chicago talking about pistol formations and the mobility of a healthy Brian Lewerke. The Spartans return 19 starters but have questions on the offensive line, and lack their standard bell-cow running back. But with a defense that could be top-five in the country, they’ll be difficult for anyone.

“It’s not the assessing or adjusting, it’s the ability to move forward,” Dantonio said. “We’ll do that on offense, I’m very, very confident of that. … There are moments that we’ve all had, that sort of defines your life. We’re trying to find those and chase them. Whether it’s the Rose Bowl or someplace else special, that’s where we’re going.”

'We embrace the negative'

Symbols and slogans abound in college football, more than any other sport. Gattis has brought “Speed in Space” to the Michigan lexicon. Dantonio’s latest mantra is “Chase the Moment,” and for emphasis, he modeled an interesting pair of cufflinks, the ones legendary Biggie Munn wore when Michigan State went to the 1956 Rose Bowl.

Dantonio’s legacy as he enters his 13th season as head coach is secure. With three more victories, he’ll surpass Duffy Daugherty as the program’s leader. But he did take a gamble by not taking a gamble on a staff shakeup. That’s another sign of Dantonio’s security and self-confidence. Some might call it stubbornness, but when you have a dominant defense, led by Joe Bachie, Raequan Williams and Kenny Willekes, you don’t necessarily have to gamble.

More: Five difference-makers for Michigan heading into the fall

More: Five difference-makers for Michigan State heading into the fall

Michigan had a dynamic defense too under Don Brown, then along came Meyer with that 62-point parting gift to dump doubt all over the place. Of course, new Ohio State coach Ryan Day was the coordinator who called the plays that shredded Michigan. Day also nabbed Michigan assistants Greg Mattison and Al Washington. Harbaugh responded by praising his own revamped staff, led by Gattis, 35, calling it the best group of young coaches he’s seen in 35 years. 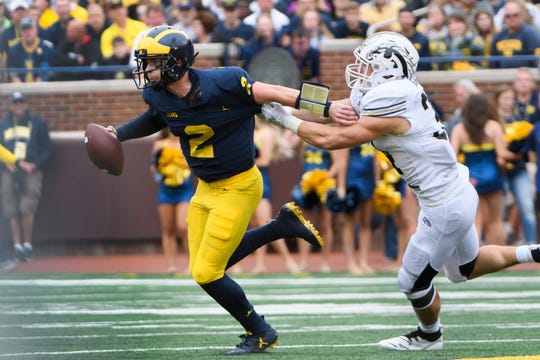 The Wolverines don’t have Devin Bush, Rashan Gary and Chase Winovich anymore, but there’s talent to step in. Overall, they return 15 all-Big Ten players, the most over Ohio State’s 13. The issue has been the offense (49th in total yards), and we’ll see if the changes are dramatic enough to win big games. Harbaugh said he plans to play backup Dylan McCaffrey along with Patterson, and there’s plenty of buzz for freshman running back Zach Charbonnet.

Harbaugh isn’t hiding from the Buckeye heat, and even had T-shirts made listing the scores of all three losses last season.

“We embrace the negative,” Harbaugh said. “We embrace the suck. OK, let’s improve. Let’s take into account the times we’ve lost, and what we can do to make that not happen again. Ever.”

The Wolverines have been hyped before and let down. The Spartans have been overlooked before and risen up. Harbaugh and Dantonio are under different kinds of scrutiny and pressure, although neither is remotely in danger from a job-security standpoint.

From a reputation standpoint, this season is huge, and their sharpened responses so far are telling. They know what’s been said and seen, and how vital it is to change.