Wojo's Pigskin Picks: If anyone can slow the Buckeyes, it's the Spartans (or not)

It’s well-established that Mark Dantonio has mystical motivational powers, and he’ll need to conjure them up to pull the upset Saturday.

Wojo's Pigskin Picks: If anyone can slow the Buckeyes, it's the Spartans (or not)

So it appears the Buckeyes aren’t going away after all, not without a court order or another handy scandal. Hey, who knew the only thing holding them back was Urban Meyer? He won a national title there, sure, but he would’ve won more if he hadn’t wasted so much time beating Michigan and ignoring Michigan State.

Now here the Buckeyes are again, rolling to 5-0 despite having a new coach, Ryan “Pay” Day, and a fancy new quarterback swiped from Georgia. And here come the Spartans again, huge underdogs, toting their special game plan to Columbus — “Pain and gain and pray for rain.”

It’s well-established that Mark Dantonio has mystical motivational powers, and he’ll need to conjure them up to pull the upset Saturday. Ohio State could be the best team in the country, at least until it suffers its annual inexplicable loss to a Big Ten middleweight. (Haha, no, not Michigan). The Buckeyes are favored by three touchdowns. They’ve outscored opponents 173-18 in first halves. They’re averaging 802 yards per game, and even though I made that last number up, you bought it for a second.

This does not faze Dantonio, who has been working the Ouija board and the radar maps especially hard this week. He knows the Big Ten championship goes through Columbus, also known as “C-Bus,” the clever moniker created by combining the average letter grade for Ohio State students with their preferred mode of transportation.

It’s hard to tell if the Spartans have a shot in this one because they insist on playing the opposite game. One week they look decent, the next week they’re randomly kicking footballs into the stands against Arizona State or escorting Indiana receivers to the end zone. But Dantonio has a formula to beat the Buckeyes, and it’s not just meteorologically oriented.

He beat Meyer twice, including once in the Big Ten championship game, by utilizing such unorthodox tactics as running, tackling, punting and kicking last-second field goals. It’s become quite the rivalry, although if the Spartans really want to turn it into The Game, they’re gonna have to lose 14 of the next 15 and surrender 62 points at least once.

They came close to that threshold on their last visit in 2017. The title indeed went right through Columbus, and the Buckeyes went right through the Spartans, 48-3. But in 2015, with a backup quarterback in the pouring rain, Michigan State shocked Ohio State, 17-14, when Dantonio hypnotized Meyer into not handing the ball to Ezekiel Elliott. (The Big Ten has since banned the use of illicit hypnosis). 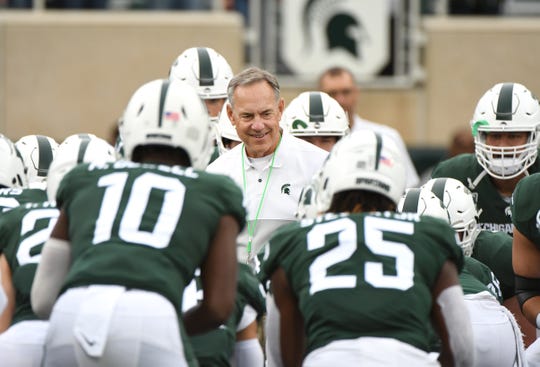 For Michigan State to pull it off again, the offense can’t keep carrying the defense. Thanks to Brian “Loose Legs” Lewerke, the Spartans edged Indiana, 40-31, last week. It was such a stunning reversal of form, Dantonio considered moving offensive coordinator Brad Salem to the defense.

It’s a whole new world in college football now, with players disappearing into transfer portals and states passing laws allowing players to get paid, and not just with unmarked bills in brown paper bags. The theory is, players deserve compensation for the use of their NIL (Name, Image, Likeness). The NCAA would prefer to stick with the long-standing payment system that, oddly enough, also is called NIL (zip, zilch, nada).

Frankly, the law makes sense, although you know there will be unintended consequences. For instance, will power programs such as Ohio State lure more recruits with the promise of lucrative endorsements? Will Johnny Hotshot from southern Ohio become a Buckeye because he envisions his likeness plastered on the side of tattoo parlors and Natty Light cans? Will hundreds of Buckeyes suddenly profit by selling their gold-pants charms awarded for victories over Michigan?

This could make it very difficult for smaller programs such as Michigan to compete, with Ann Arbor’s limited endorsement possibilities: Legal edibles, plant-based “meat” products, the History Channel. It’s already hard enough for the Wolverines to keep up. I mean, Iowa is coming to town and pundits think the Hawkeyes are seriously considering winning. Just last week, Rutgers was so embarrassed it lost to Michigan, it threw its coach in the Ash can.

Jim Harbaugh has adopted drastic measures, such as moving offensive coordinator Josh Gattis to the sideline, where he takes over the task of yelling at players who fumble. In the near future, the Wolverines will consider adding healthy running backs and larger defensive linemen to the sideline too.

In a way, Ohio State’s continued dominance is a refreshing and disgusting throwback to the days of yore, when the sport was controlled by overweight conference commissioners gargling bourbon and making up rules. The Buckeyes haven’t beaten anybody of note yet, and the Spartans are always dangerous when Dantonio flashes his #Disrespekt card. You just know he loves that 22-point spread, while privately hoping it doesn’t get covered in the first quarter.

Iowa at Michigan: Iowa is another of those old-fashioned smashmouthy teams, and that doesn’t bode well for Michigan. The Wolverines are still plucking Badger cleats and teeth out of their backsides from two weeks ago. The Hawkeyes have won five of the past six meetings, but as always, I’m picking based on the transitive Rutgers scale. Iowa beat the Scarlet-Faced Knights, 30-0; Michigan beat them, 52-0. Wolverines by 22? Let’s not get ridiculous. Pick: Michigan 27-17

Purdue at Penn State: The Nittany Lions are 4-0 after fattening up on a hearty Idaho-Buffalo-Pitt-Maryland schedule buffet. It doesn’t get any easier now, except that it really does. Purdue is wracked with injuries, and the road to the Citrus Bowl goes through Happy Valley. Pick: Penn State 56-13

Northwestern at Nebraska: Scott Frost is the latest to discover the ol’ savior job isn’t as easy as fans make it sound. The Cornhuskers put up quite a fight last week against Ohio State for approximately 11 seconds before succumbing 48-7. The Wildcats can’t throw the ball, but at least they can’t catch it either. Pick: Nebraska 24-23

Auburn at Florida: Remember back in the day when kids patiently waited their turn and were happy to maybe start as fifth-year seniors? Here’s another power in Auburn, led by another freshman quarterback in Bo Nix. If he keeps this up, he actually might become the best Bo ever to play at Auburn. Pick: Auburn 24-16

View from the other side: Michigan vs. Iowa

'That goes through Columbus': Big Ten title hopes already at stake for MSU