After getting burned in other programs, he has found a family with Spartans

Spartans from left: Travis Trice, Denzel Valentine and Branden Dawson are the experienced players who are expected to anchor the Spartans. MSU held their annual Media Day at Breslin arena on Tuesday Oct 28, 2014, in East Lansing. Dale G. Young
Fullscreen

Tom Izzo appeared happy to be back on the court. Dale G. Young
Fullscreen

A discussion over who's hand was bigger prompted this measuring session between Travis Trice(left) and Denzel Valentine. Dale G. Young
Fullscreen

Lourawls 'Tum Tum' Nairn Jr. grins. When asked how he would guard himself, he quipped: "Back up." Dale G. Young
Fullscreen 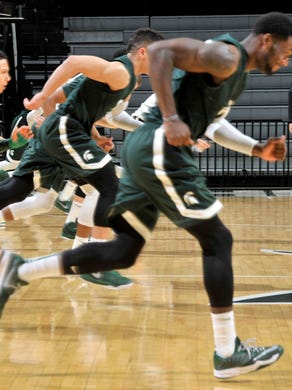 Branden Dawson and the rest of the Spartans sprint across the floor before practice. Dale G. Young
Fullscreen

East Lansing — Tom Izzo often talked about Draymond Green being a special player, a former All-American he once dubbed "the perfect Spartan."

But at Michigan State's media day Tuesday, Izzo couldn't help but mention him again. Neither could Lourawls "Tum Tum" Nairn Jr., a 5-foot-10, 170-pound freshman from the Bahamas whom Green, now an NBA pro with the Warriors, took an immediate liking to this summer playing pickup games on campus.

"He tells me all the time that I remind him of himself," Nairn said.

And he told Izzo something else, almost as soon as he'd met the new guy.

"When Draymond Green says, 'If there's ever a freshman that should be a captain, it's him,'" Izzo said, "that's about as good a compliment as you can get."

And that's something worth noting as this Michigan State team begins to forge a new identity. Izzo raved about his seniors — Branden Dawson and Travis Trice — and he's expecting big things from junior Denzel Valentine, among others. But if the Spartans are looking for a spark, they just might find it in a freshman Izzo already is lauding for his "incredible leadership" and "toughness."

Nairn is a name worth remembering, Trice agreed, not that it'd be easy to forget. His father, Lourawls Sr., was named after the three-time Grammy-winner. His nickname comes from his mother, after a character in the movie "3 Ninjas" — the one who loved to eat the way her eldest child did as an infant.

His new coach wasn't sure what to call him at first, but "I just keep saying Tum Tum," Izzo joked. "I don't want anybody to think he's a singer or anything."

He doesn't mind telling you what he thinks of Nairn, though. A former track standout, Nairn is arguably the fastest player Izzo has ever coached. (Asked what he'd do if he had to guard himself, Nairn replied, "Back up.") But he's also one of the players Izzo has threatened to kick out of the gym this fall — for good reasons.

"He just sees nothing but basketball — Michigan State basketball," Izzo said, smiling, "and doesn't care about anything else."

He does, of course. And Izzo knows it, which is what he was referencing Tuesday, talking about Nairn's remarkable journey from the islands to East Lansing.

"I've never seen a team rally around a guy like they have him," Izzo said. "Tum brings a whole different mentality as a human being, much less as a basketball player. I like that. I can appreciate what he's been through and what he's done. I appreciate where he is."

So does Nairn, who admits "it's still shocking to me that I'm here right now," mostly because of where he came from – a poor neighborhood in the Bahamian capital of Nassau — and where he was six years ago.

'I thought it was over'

Nairn was only 13 and relatively new to basketball when he was approached by a recruiter from South Florida Prep Christian Academy, offering him a chance to pursue a better life — and a college scholarship — in the U.S.

His parents — Lourawls Sr. is a steelworker — were reluctant to let him go, but eventually they agreed. Only what Nairn found was largely a sham, a now-shuttered diploma mill with little regulation and even less regard, it seemed, for his well-being. He says he lived in a house with 21 other students and one bathroom. The "campus," later condemned, was in a strip mall above a liquor store. The principal was both the athletic director and the basketball coach — and the school's founder.

"As soon as I got there, I knew how bad it was," Nairn said. "But I didn't want to go back to the Bahamas, because I felt like I wasn't good enough to get another opportunity. So I stuck with it."

For two years, he did, hiding his own misery from his family — "I would lie to them and say, 'Nah, everything's fine' " — until he finally broke down in tears near the end of Christmas break his freshman year.

"I looked in the mirror and was like, 'Tum, you can't keep doing this to yourself. You can't keep lying to your family,' " said Nairn, who told his mother everything — and didn't go back.

"At that point, I thought it was over for me," Nairn said. "But God always has a plan. I believe that with all my heart."

And so it was, he says, that a few months later, after another Florida prep school no-showed at a camp in Freeport, he stumbled into a coach who cared. Kyle Lindsted from Sunrise Christian Academy in Wichita, Kansas — another prep school with a prominent basketball program — took notice of Nairn. And eventually, he convinced the family to try, try again.

This time, "it was a totally different situation." Nairn flourished, on and off the court. And as a top-100 recruit nationally, he drew interest from major Division 1 programs, whittling his short list down to a handful of schools, including Indiana, Oklahoma and Minnesota. But after a visit to the Michigan State campus last September, he was sold.

"I wanted to find a family, not just a basketball team," Nairn said, noting he's lived without his own family, more or less, since he became a teenager. "To be completely honest, I don't think I could've fit in to any other college like I do here. There's so much of a family here now with the guys in the locker room, with the coaching staff, that every day when I put on my practice jersey I'm thankful to God that I'm here.

"It's hard for me to think of what I've been through, but I'm just glad to be in the position I am right now."