He's back and promising to be "100 percent" when he reports for spring training.

Detroit Tigers catcher Alex Avila gets some help with his firefighting gear from Northville firefighter John Ponte. Avila and Joe Nathan competed in the “Suit Up” race to see who can suit up in the firefighter gear the fastest. David Coates/Detroit News
Fullscreen

Tigers catcher Alex Avila, left, and pitcher Joe Nathan compete to see who can get their firefighting gear on the fastest. David Coates/Detroit News
Fullscreen

Tigers pitcher Justin Verlander rides in a Falcon F7 in the Cars on Parade. The Falcon F7 is made in Holly by Falcon Motor Sports and only 12 are made a year. Robin Buckson/Detroit News
Fullscreen

Caleb Wood, 12, of Novi seems happy with what he captured on his phone while Tigers players ride through Cobo Center in the Cars on Parade. Robin Buckson/Detroit News
Fullscreen

Tigers broadcaster Rod Allen, left, rides with Brandon Rickert, 17, who has autoimmune disease and got to meet the Tigers as part of his Make-A-Wish experience. Robin Buckson/Detroit News
Fullscreen

Fans take photos while Tigers players enter the stage area at the Chevrolet display for a Q&A with fans. Robin Buckson/Detroit News
Fullscreen

Tigers pitcher Justin Verlander answers a question during a Q&A with fans at the Chevrolet display. Robin Buckson/Detroit News
Fullscreen

Fans listen to and take photos of the Tigers at the Chevrolet display. Robin Buckson/Detroit News
Fullscreen

Tigers pitcher Justin Verlander, left, describes a special jersey that he got for Christmas, answering a question from the audience at the Chevrolet display. Robin Buckson/Detroit News
Fullscreen

Elle Sheppard, 8, stands with her mother, Shannon Sheppard, both of Brighton during the Tigers appearance. Robin Buckson/Detroit News
Fullscreen

From left, Kara Jacquemain, gets a front row seat with her sons, Brandon Rickert, 17, Adam Rickert, 20, and their father, Dennis Rickert while the Tigers do a Q&A at the Chevrolet display. Meeting the Tigers was part of Brandon Rickert's Make a Wish experience. He has autoimmune disease. Robin Buckson/Detroit News
Fullscreen 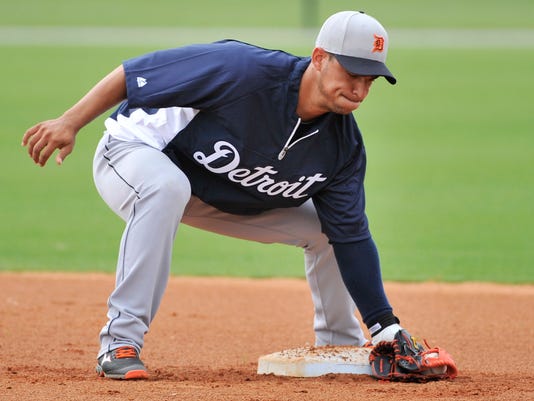 Detroit — Jose Iglesias was talking eagerly about a new season, a new lease on his young career, and all the changes the Tigers have made this offseason.

"Well, he's not new anymore," Iglesias said, quickly interrupting himself with a laugh. "I'm the new one."

Easy to forget, obviously, because Brad Ausmus and his coaching staff only got a fleeting glimpse of their defensive whiz at shortstop last spring, and vice versa.

Plagued by persistent pain in his shins, Iglesias managed just a handful of at-bats early in spring training last year. And after a series of visits with three different specialists, he finally was diagnosed with bilateral tibial stress fractures in both legs, effectively ending his season before it started.

Now he's back and promising to be "100 percent" when he reports for spring training next month, arriving in Lakeland, Fla., a few days early with the pitchers and catchers.

Iglesias, who turned 25 this month, visited Dr. Thomas Clanton at the Steadman Clinic in Vail, Colorado, last week for another CT scan that came back "clean," Ausmus said. So the young shortstop will continue ramping up his workouts with a personal trainer in Miami, prepping for what he hopes will be his first full season in Detroit.

"I've been hitting on the field, I've been taking ground balls, I've been running," said Iglesias, though he's only sprinting at "75-80 percent" speed for now. "I've been doing everything without pain."

For Iglesias, that's a refreshing feeling. He admits now he'd been quietly dealing with pain in his lower legs since the beginning of the 2013 season, months before the Tigers acquired him from the Red Sox in a three-team trade following Jhonny Peralta's midseason PED suspension.

But what began as a rookie's bid to crack the lineup — Stephen Drew's concussion gave Iglesias his first shot in Boston — gradually became his cross to bear. And eventually the Tigers' headache, when he no longer could handle it.

Clearly, the Tigers missed Iglesias, who was runner-up in the 2013 AL rookie of the year voting, hitting .303 while flashing some Gold Glove-caliber fielding. Last season, the team shuffled through a series of underwhelming options at shortstop with Alex Gonzalez, Danny Worth, Eugenio Suarez and Andrew Romine.

And just for the record, "I missed them, too," Iglesias says.

Mostly, though, he missed the game.

"It was very difficult," he said. "To be away, for the first time in my life, from baseball."

Iglesias stayed in touch with some of his teammates, but he stayed away from the team. And he mostly steered clear of watching them play, though he admits he saw "a couple games in the playoffs."

That "was even more difficult," he said, "to see your team fall and you can't do anything to help it."

But ask Iglesias, who defected from his native Cuba at the age of 18, if it has made him appreciate it more — the game and his gifts — and he'll tell you it absolutely does.

"I never take it for granted, but I was really disappointed that I wasn't playing, because I love this game very much," he said. "This is what I love to do."

The Tigers know what he can do — a middle-infield tandem of Iglesias and Ian Kinsler could do wonders for that pitching staff — but only if he's healthy. So while they'll take it slow with the likes of slugger Miguel Cabrera and reliever Bruce Rondon this spring, "with Iglesias we've got to kind of get him out there and see if he can withstand pounding," Ausmus said.

Iglesias, for his part, says he's ready. No one is sure just what caused the stress fractures in his legs, but they've looked at the biomechanics and refined his diet. And Iglesias says now he's in the best shape of his life, dropping his body fat from 14 percent to 11, and his weight from 195 to 188.

But his mentor-in-waiting, Tigers infield coach Omar Vizquel, an 11-time Gold Glove winner, cautions, "It's going to take him a while to get in the swing of things — mentally and physically — after a whole year of not playing."

Iglesias says he understands that, just as he knows he'll have to be a bit more honest with the team about how he's feeling from here on out.

"But keep in mind, I dealt with this for a full year and performed at the highest level," he said. "I will try to get it out of my system. But I don't think it will be an issue. … Thank God, knock on wood, I'm good to go."

If true, it'll be good news for that new manager of his, the one who is eager to see what he has been missing.

"Yeah, it's like getting a new player — it's almost like you've acquired someone," Ausmus said, smiling. "I have a new shortstop."