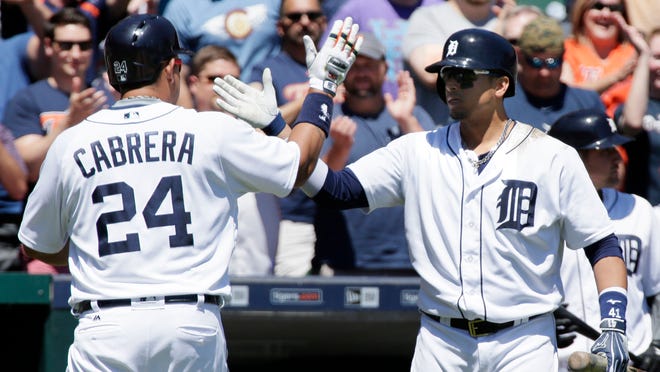 Detroit — If the Tigers are going to avoid falling on their face this summer, they’ll surely need their arms.

But right now, they’re having trouble extending them.

And that’s a problem they can’t seem to shake.

They got away with it Wednesday in a getaway game that turned into a runaway rout, albeit at a painfully slow pace, with 345 pitches and 29 hits strewn across a 3-hour, 13-minute matinee.

And there’s no doubt the 10-3 victory over the Marlins at Comerica Park sent the Tigers off on an 11-game trip feeling better about themselves, thanks to bookend series sweeps of the Mariners (four games) and Marlins (two) that helped soften the blow of that three-game bludgeoning by the division-leading Indians last weekend.

“You don’t want to get swept by the team that you’re chasing, so that was the downside,” manager Brad Ausmus said. “But 6-3 is a good home stand.”

Wednesday was a very good day for the Tigers hitters, as they jumped Marlins starter Tom Koehler early and never really let up. Detroit sent seven men to the plate before recording an out, staked starter Daniel Norris to a 4-0 first-inning lead and finished with 15 hits, including another monstrous home run (456 feet to the brick wall in left-center field) from Miguel Cabrera.

Yet, it was not a day without some angst for Ausmus, who watched Norris — the talented young lefty making his second major-league start this season — struggle out of the gate as well.

Norris worked his way in and out of trouble in the first inning. He put runners and first and second with the heart of the Marlins order coming to the plate, but still managed to strike out the side — getting Marcell Ozuna and Giancarlo Stanton looking — as he escaped the jam.

Not so in the second, however, as the Marlins drew a walk and rapped three hits, including a triple to the wall in center, to cut the lead to 4-2. Norris needed 57 pitches to get through the first two innings. And though he settled down, by the time he’d finished the fifth inning, it was time for a handshake from his manager in the dugout. Norris had thrown 100 pitches, allowing eight hits and two walks, and striking out a career-high eight.

Good enough to pick up the win Wednesday, and for Norris to consider it a “positive day” overall, despite some control issues with his off-speed pitches.

“It was definitely a battle, a grind,” he admitted. “The first couple innings, the pitch count got up there quick, and that’s concerning. But I feel really close to starting to fire on all cylinders and getting deep into ballgames.”

The sooner, the better. Because close isn’t going to cut it for much longer with this Tigers rotation. And Ausmus knows it.

As encouraging as it was to see the bats heat up, and the baserunning pay dividends — an early hit-and-run, along with Ian Kinsler’s aggressive tag-up, helped pad the early lead — the Tigers manager still felt uneasy in the dugout. When Norris’ day was done, his was only just beginning.

“The truth is, now you’ve got to get four innings out of your bullpen somehow,” Ausmus said. “And the type of game we had, and the score the way it is, we didn’t want to use any of those back-end guys. … Unfortunately, you’ve got to find ways to get through a game.”

That’s now seven consecutive games — and eight of the last nine — in which the Tigers starter has failed to last six innings. Detroit’s starters have pitched 45 innings during that stretch, compiling a 7.40 ERA, while the bullpen has thrown a whopping 40 innings.

That bullpen effort — with a spark from Kyle Ryan and Bruce Rondon, who warmed up twice Wednesday just in case, and some solid work from Alex Wilson — has been critical, allowing just seven runs (1.58 ERA) in those nine games. Without it, a 6-3 home stand probably ends up a sub-.500 affair.

And with no off-days between now and the All-Star break, “it’s a concern,” Ausmus agreed. “We’ve been watching it. It’s tough.”

It’s about to get tougher, too, with 11 in a row on the road, where the Tigers have lost 17 of their last 25. But if they’re going to find any traction, that’s where it’ll have to begin, starting tonight with Jordan Zimmermann on the mound against the Rays.

They don’t have to finish what they start. But if the Tigers are going to stay in this American League race — they’re two games out of the wild card as we near midseason — they’ve at least got to make those starts last a little longer.