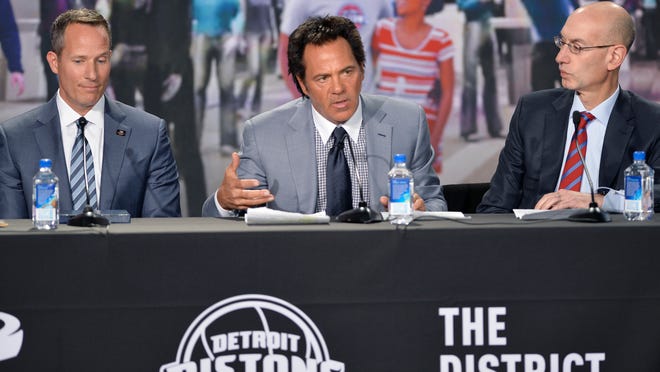 Detroit — For Dave Bing, it started as lobbying. Eventually, it became marketing. But by Tuesday afternoon, as Pistons owner Tom Gores proudly announced the team was returning downtown nearly 40 years after it left the city of Detroit for greener pastures in Oakland County, it was simply celebrating.

“It’s been a long grind,” sighed Bing, the Pistons legend who went on to become a successful businessman in Detroit and later the city’s mayor from 2009-13. “But I never gave up hope.”

Something that Bing and the other former Pistons who attended Tuesday’s news  conference kept coming back to as they talked about this hoops homecoming bringing things “full circle” for a generation — and a franchise — twice removed from the place it once called home.

“When I first talked to Tom Gores maybe 2-3 years ago, I remember him telling me he wanted to do something bigger than just own the Pistons,” said Bob Lanier, another Hall of Famer who played for the Pistons in the 1970s, back when they still played their home games at Cobo Arena. “And he has proven that, by making this move. … As a former Piston and as somebody that loves the city of Detroit, it makes me extremely proud.”

And it takes him back, sure. To the sting the city and the team felt when it pulled up stakes at left Detroit in 1978. But also to the memories they created before that, both for themselves and for the kids who grew up idolizing Pistons players.

Earl Cureton, who went on to become an NBA champion himself, was one of those kids, growing up on Detroit’s east side, working after school at the Mack-Bewick supermarket, making 50 cents an hour. He grew into a basketball star at Finney High and after starting his college career in Pittsburgh, he returned home to play for the University of Detroit and then-coach Dick Vitale in the late-1970s.

He vividly remembers sitting in the stands the very last time a pro basketball team truly made Detroit its home. It was April 9, 1978, and the Pistons — playing their final game of the season at Cobo — were in fourth place and going nowhere in the standings.

They were going someplace else after the season, though, with owner Bill Davidson taking the Pistons north to play in the Pontiac Silverdome — and later the Palace of Auburn Hills — rather than joining the Red Wings at Joe Louis Arena. And looking around — both inside Cobo, and around the city after nearly a decade of white flight — “you kind of understood what was going on,” Cureton said.

He’d just finished his sophomore season at U-D, a college team in its heyday that, on occasion, drew more fans to Calihan Hall than the Pistons would to Cobo. In fact, only 3,482 fans showed up for that final matinee game against the Denver Nuggets in ’78. And there was room enough that Cureton and fellow Detroiter Greg Kelser, then a star at Michigan State, found themselves sitting courtside that afternoon for one of the most memorable performances in NBA history.

Nuggets star David Thompson — locked in a battle for the season scoring title with the Spurs’ George Gervin, another Detroit native — lit up the scoreboard that afternoon, finishing with 73 points. Only Wilt Chamberlain had ever scored more in an NBA game.

“And that’s a piece of history that you don’t forget,” Cureton said.

That’s a history the Pistons will start piecing back together now, reconnecting with a city they abandoned nearly four decades ago. It’s a much different city than the one they left, obviously, and as with any business decision, it’s never as altruistic as the dealmakers like to make it sound.

But something was lost when the team left, and no one, perhaps, understands that better than Bing, arrived in Detroit 50 years ago as the No. 2 overall pick in the NBA draft out of Syracuse.

Decades later, he found himself serving as mayor of Detroit, sworn in only a couple months after Davidson passed away at age 86. And by then, he says, “it was kind of obvious to me then that the clock was starting to turn in Detroit’s favor” when it came to luring the Pistons back home.

Bing publicly lobbied for it while in office. And after Gores settled in as the Pistons’ new owner — “a guy who does see the big picture, long-term, in the city,” Bing said — he felt it was only a matter of time, given what was already underway. With the entrepreneurial spirit awakened in Detroit, and two other billionaire sports owners putting down roots, he said, “Gores will be the third leg of that stool that’s already here between the Ilitch family and (Dan Gilbert.)”

Not coincidentally it was the former mayor’s voice that narrated the Detroit-centric promotional videos the Pistons played at The Palace and on TV.

“The unfortunate thing for so many of our kids the last 40 years, they heard about the Detroit Pistons, but they couldn’t get close to ´em,” said Bing, who also has found partner in Gores for his youth mentoring program in Detroit. “They couldn’t touch ´em. They were not here, they were not in the neighborhoods.

That was a different time, and a different place, obviously. Professional athletes, with the millions they make, don’t mingle with the masses the way they once might have.

And while much of what was said at Tuesday’s news conference is only so much blather for those who can’t – or won’t – see ripple effects of Detroit’s resurgence, there will be an immediacy that is felt for many kids in the city.

“We want to be all in on Detroit," said Palace Sports & Entertainment vice chairman Arn Tellem, the activist-agent hired by Gores in August 2015 and the man who spearheaded the negotiations with the Ilitch family on this downtown move. "We want to do right by the city and community here."

Last winter, Tellem announced a $300,000 donation to the Detroit Police Athletic League to create a youth basketball program, among other Detroit-based initiatives. And Tuesday, before the Pistons’ staff and current players hosted their annual community Thanksgiving dinner over in Eastern Market, the team laid out several other plans targeting kids in Detroit.

Among them, a promise spend up to $2.5 million to rebuild an estimated 60 basketball courts in city parks over the next six years while also handing out 20,000 free Pistons tickets annually to Detroit students and residents.

“I actually think it’s gonna bring the life back, like it did for me and Greg Kelser,” Cureton said. “We had an opportunity to see pro basketball growing up as a kid. We had a chance to see Bob Lanier come by and do clinics right in our neighborhood.”

Lanier, now 68, remembers those well, and what he sees now makes him smile.

“When we left Cobo, it was different — very different,” he said. “But in the end, I must give Mr. Davidson his due, because when he built that arena out there, The Palace, it made him a huge amount of money, they won championships, people came out in droves. But that was then. This is now. And as Mr. Gores said, I think the timing is right for the Pistons to come back and be a part of this renaissance in the city.”