Detroit Pistons' Andre Drummond is introduced before the start of the game as the Charlotte Hornets visit the Detroit Pistons at Little Caesars Arena during their home opener in Detroit, Michigan on Oct. 18, 2017. Robin Buckson, Detroit News
Fullscreen 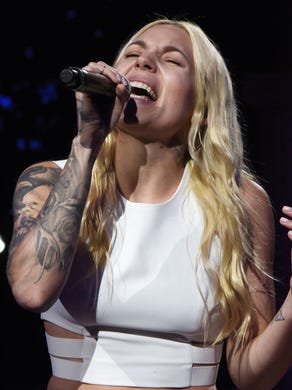 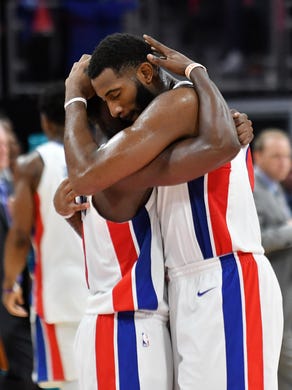 Pistons' Langston Galloway, top, battles Hornets' Malik Monk for a loose ball and hands the ball off to Henry Ellenson, left, in the first half. Robin Buckson, Detroit News
Fullscreen 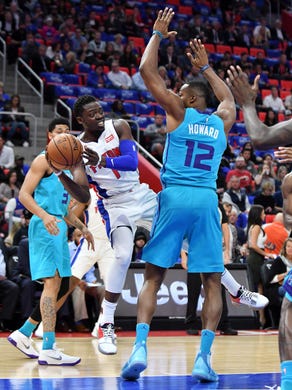 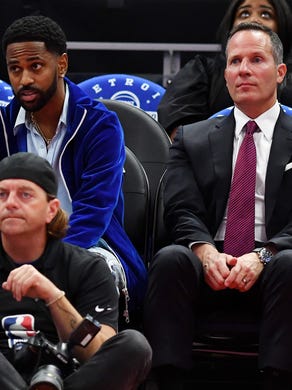 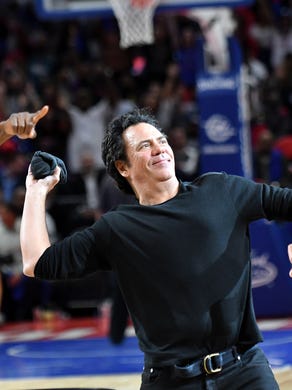 Piston owner Tom Gores on the sidelines before the start of the game. Robin Buckson, Detroit News
Fullscreen 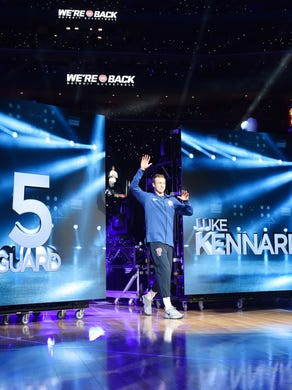 Detroit Pistons Tobias Harris puts up a shot while warming up before the home opener. Daniel Mears, Detroit News
Fullscreen

The Pistons drum line performs on the plaza before the game. Robin Buckson, The Detroit News
Fullscreen

Face painter Dan Priest of 2Clowns.com poses for a photo with "Auntie Pat" Pat Watkins on the plaza before the game. Robin Buckson, The Detroit News
Fullscreen

George Drain plays corn hole with his grandson, DaLeone Amos, 11, both of Saginaw, on the plaza before the game. Robin Buckson, The Detroit News
Fullscreen

Tennie Crump dances to some music on the plaza before the game. Robin Buckson, The Detroit News
Fullscreen

Former Piston Grant Hill does a radio interview on the concourse before the game. Robin Buckson, The Detroit News
Fullscreen

Rory Hayden, left, plays corn hole with Alyssa Minton both of Rochester Hills at the plaza before the game. Robin Buckson, The Detroit News
Fullscreen

Basketball fans make their way into Little Caesars Arena, with the Detroit skyline in the background, for the Pistons first home opener back in Detroit in nearly 40 years. Daniel Mears, Detroit News
Fullscreen 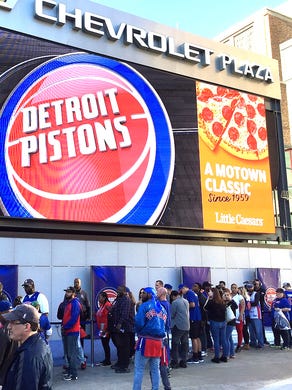 Fans line up outside the Chevrolet Plaza. Robin Buckson, The Detroit News
Fullscreen 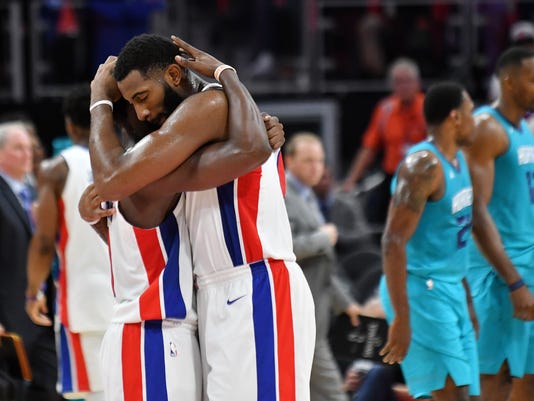 Detroit — With the final seconds running down on the clock, Reggie Jackson stood in the giant Pistons logo near center court inside Little Caesars Arena and motioned to Andre Drummond, who made his way over for a congratulatory hug.

They opened a new era of Pistons basketball as well — the first true home game in Detroit in nearly four decades — and while the contributions came from every part of the roster in this one, nowhere did it register quite so much as it did with those two players.

That’s why Jackson and Drummond lingered a little bit longer at the end, the point guard passing along a message to his running mate — a little something about leadership and consistency — and the big man responding in kind.

“It was just an emotional moment for us,” Drummond explained. “And I just wanted to hug him and tell him it was good to have him back.”

And it was, wasn’t it? It was good to have the Pistons back in the city where so many Detroiters felt they belonged.

One of them, former mayor Dave Bing, was joined by fellow Hall of Famer Bob Lanier in celebrating the Pistons’ return downtown Wednesday night. Forty years to the day after the last Pistons season opener in the city back in 1977 — their final season at Cobo Arena — those two NBA legends brought out the game ball.

And then in a bit of a surprise, Eminem, wearing a Pistons T-shirt under a black hoodie, brought down the house, grabbing the mic from public address announcer John Mason to welcome back the Pistons “to my city, to your city” and exhorting the crowd to “make some noise!”

“I’m not gonna lie,” Drummond laughed afterward. “When I saw him, I couldn’t stop looking at him. I’ve never seen Eminem in my life.”

Pistons coach Stan Van Gundy breaks down the win over the Hornets.

Of course, a couple generations of Detroiters probably could say the same about the Pistons. And that was the underlying theme Wednesday night, as this franchise began the long, difficult task of reintroducing itself to the city it left behind long before any of these current Pistons players were even born.

The halftime entertainment featured Grammy-nominated artist Skylar Grey performing the song “Coming Home,” backed by a local choir and a video montage highlighting Pistons outreach efforts in Detroit. And in a pregame media session, Pistons owner Tom Gores reiterated how “grateful” and “blessed” he feels to bring his team back downtown, a long-rumored move that was officially announced last November.

“That’s a big deal,” he said. “The city has worked really hard for this.”

But it will take some time before this really feels like home for the Pistons, playing basketball in an arena initially ticketed for hockey and trying to carve out a new fan base after ditching so many loyal season-ticket holders in Oakland County.

“It’s gonna be a season,” Gores admitted, when asked how long he thought it’d take to settle in. “We’re here. You know, I’ve heard some comments that it’s not enough Pistons and this and that, and, you know, it’s possible. But the thing is, we’re moving into this place. It’s like a new home. …

“The first day is when it becomes home. You get your pictures up. And you’ve got to feel it. You can’t create emotion by nothing. See, emotion’s gonna be created here. That’s what’s gonna happen. And then you create a home.”

Home is where the heart is, or they say. And for the fans who showed up Wednesday — it was an announced sellout but the arena was probably two-thirds full — they saw encouraging signs of that, at least, from the Pistons.

Granted, this was the perfect guest for openers, the kind of team you’d schedule for your homecoming game. The Hornets finished just behind the Pistons in the Eastern Conference standings last spring. And they showed up Wednesday without veteran guard Nicolas Batum, their second-leading scorer from a year ago, and Michael Kidd-Gilchrist, arguably their best defender.

Still, Tobias Harris took control early, pouring in 17 of his game-high 27 points in the first quarter. And the Pistons got key contributions from their bench, most notably Langston Galloway (16 points) and Henry Ellenson (13). They also got 40 minutes from Stanley Johnson, who endured a torturous shooting night (0-for-13) but still impressed with defensive intensity and hustle, finishing with four steals and a huge tipped assist on an offensive rebound late in the fourth quarter.

But what really stood out in the end were the signs of “sacrifice,” as their coach, Stan Van Gundy described it. And those were most evident in Jackson’s much-anticipated return to action, after a nightmarish 2016-17 season derailed by injury and a wait-and-see summer that couldn’t end soon enough for the Pistons’ point guard.

Wednesday’s opener was only a first step, but it was an important one. Jackson’s turnover-free 27 minutes certainly didn’t go unnoticed. Nor did his effort as he fought through screens guarding the Hornets’ Kemba Walker to start the second half, while defensive ace Avery Bradley sat with foul trouble. Mostly, though, there was a bounce in his step and a flow to the Pistons’ offense that was often missing last winter.

“The thing everybody notices, if you’re watching, there’s a lot less pounding the ball,” Van Gundy said. “(Jackson) makes his move, and then he makes the pass. And that’s contagious. It allows other people to play.”

So does Drummond’s presence, as long as he’s making sure it’s felt. That often wasn’t the case last season. But it was in this game, as Drummond showed good energy and effort throughout despite being saddled with early foul trouble. He finished with eight points, 13 rebounds and two blocks in just 22 minutes.

“The fact that we’ve had a couple key guys be willing to change a little bit,” Van Gundy said, “I think that shows we’ve become a lot more unselfish.”

And when the show was over Wednesday night, that’s what that moment was all about.

“Honestly, we were just talking about how we have to lead each and every night,” Jackson said. “We have to be our best selves.”