If Michigan is to advance to the Final Four, Wagner has to limit his foul issues. 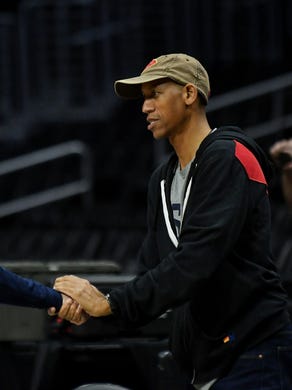 Michigan guard Jaaron Simmons, right front, gets rid of an extra ball before the next drill during the open portion of Michigan practice. Robin Buckson, Detroit News
Fullscreen Los Angeles — The word in German is “dummkopf,” and like so many of us, John Beilein learned what it meant from an old television show.

The literal translation is something close to “stupid head,” or blockhead, if you will. And when Beilein finds himself at wit’s end, looking for a way to express his displeasure with Moritz Wagner’s penchant for careless fouls, Michigan’s basketball coach wants to make sure nothing gets lost in translation.

So, yes, Wagner admits with a laugh, “Sometimes he calls me a dummkopf.” Or that fouling is “dumm,” which the junior big man insists he already knows.

If they’ve talked about it once, they’ve talked about it 100 times over the last couple years. Actually, by Beilein’s rough estimate, “we’re talking about thousands of times now. He’s just got some habits where … it’s like he can’t control it sometimes.” Which is a problem for a coach like Beilein, who doesn’t have much patience for that sort of thing.

More: Michigan vs. Texas A&M: Who has the edge

And yet, somehow, these two have found a way to make it work, the coach who has built a career around self-control and the player whose game is based on unbridled enthusiasm. They’ve done more than that, really, forming a unique relationship that is at the heart of another NCAA Tournament run for these Wolverines, who’ll face Texas A&M on Thursday in the Sweet 16 at the Staples Center.

“He’s got an incredible personality and I think I have a bond with that young man,” Beilein said. “I’ve coached a lot of kids, but maybe he goes into the special category of a kid you love coaching no matter what. It’s amazing how we connected. It’s just a perfect fit.”

Schematically, there was little doubt about that from the start. Beilein’s recruitment of Wagner began with a random email from a European scout, but it didn’t take the coach long to see the teenager’s rare skills for his size made him an obvious fit for his offensive system.

Likewise, it didn’t take Wagner long to realize he was a long way from his Alba Berlin club team once he’d arrived in Ann Arbor, and it wasn’t just the language barrier or those stomach-upsetting meals at Chipotle.

“As a freshman coming in I thought, ‘OK, he’s just yelling at me to yell,’” Wagner said. “I was a freshman, kind of a scapegoat, wondering, ‘What’s going on here?’ But I understand now that’s a little different. He has a lot of belief in me. …

“He’s really hard on me, and he’s supposed to be. I understand that. There’s never a day where everything is good, you know? And I take that as a compliment, that he hopes — and believes — that you’ll get better. I really appreciate that. He trusts me that I understand that, and the other way around.”

What goes around comes around, certainly. And whether he’s in the game or on the bench, Wagner is in Beilein’s ear like no other player in the coach’s 40-plus years of calling out plays. Which is why I asked him Wednesday if his coach ever tells him to pipe down, in so many words.

“Yeah, sometimes he does — after a game,” Wagner said. “But I think he appreciates that. I’ve always been the type of guy who wants to have a dialogue, not a monologue.”

His teammates know that, and so do opponents, as Wagner’s exuberance and feisty play leave little room for indifference.

“Moe’s one of a kind in how he handles himself, both on and off the court,” said Duncan Robinson, a fifth-year senior who lives with Wagner. “I think that’s part of the reason he’s so good.”

Yet it also has been part of the problem lately, particularly the way he’s using his hands, picking up fouls left and right with the officiating tightening in tournament play. Wagner has played fewer than 25 minutes in five of the last 10 games, and managed just 17 points and 13 rebounds combined in the two wins in Wichita last week. In Michigan’s great escape against Houston on Saturday night, Wagner couldn’t believe it when he picked up his fourth foul with nearly 9 minutes to play.

“Normally that’s not a foul,” Beilein agreed. “But if that’s the way they’re gonna call it in the NCAAs, then he has to adjust to that. … Missing Moe in a lot of these games changes a lot of what we do.”

That can’t continue if Michigan wants to make this a Final Four run. And that’s why Beilein and assistant coach Luke Yaklich, who’s in charge of the Wolverines’ defense, changed things up in practice Tuesday, insisting that Wagner hold tennis balls in each hand while playing defense to get him to focus on using his feet instead of “putting his hands on people.”

He’ll be tested again Thursday by Texas A&M’s frontcourt tandem of Tyler Davis and Robert Williams, fresh off a dominant showing against defending national champ North Carolina. But Wagner has thrived in these kind of situations before, holding his own defensively and then proving to be a matchup nightmare at the other end with his inside-out versatility. (He’s shooting 40.3 percent from 3-point range this season.)

We saw it in some of his breakout performances as a sophomore — wins over ranked teams like Wisconsin and Purdue and Michigan State. Then there was last year’s second-round NCAA Tournament upset of Louisville, when Wagner sparked a second-half comeback and finished with 26 points — a career-high at the time — on 11-of-14 shooting.

And even though Michigan’s season ended the next week in an emotional loss to Oregon, with Wagner fumbling his way through a 3-for-10 shooting night, there suddenly was an NBA future to explore. Wagner joined teammate D.J. Wilson in declaring his eligibility for the draft, and he went through the whole process from the scouting combine to individual workouts before deciding to withdraw his name.

It was a “stressful” experience, but a worthwhile one, Wagner says now, “seeing where I stand and what people think of me,” however blunt the reports were.

“You hear every day you’re a bad rebounder and you’ve got to improve on that — to the point where your dad even tells you’re a bad rebounder,” Wagner said, smiling. “So you kind of develop a certain anger and a chip on your shoulder that you want to prove everyone wrong. It kind of forced me to have that mentality starting in October.”

And it showed, as Wagner, after adding 15 pounds of muscle last summer, dramatically improved his rebounding numbers, averaging 7.2 per game, up from 4.1 last season, while leading the Wolverines in scoring at 14.2 points a game. His defensive rebounding percentage (25.4) also ranked second-best in the Big Ten, which is critical to Beilein’s goal of winning the possession battle every night.

As for Wagner’s own goals — and whether this spring’s NBA decision might be different when the season’s over – he won’t say. Mostly because he’s too focused on the moment, and the moments.

Like that buzzer-beater Jordan Poole hit Saturday night to keep the party going, one that had his parents screaming at the television in their apartment after 5 a.m. local time back in Berlin.

“They’re very emotional, just like me,” Wagner laughed. “That’s not good for the neighbors.”

But it’s good fun, all of it — “I love this stuff,” Wagner said – and when the yelling stops, then he’ll know something’s wrong. Until then, he has a few ideas about those German lessons for his coach.

“It’s kind of cool because I can put the words in his mouth,” Wagner said, thinking out loud.

“I could totally set him up. I could make him say, ‘You’re a beautiful young guy,’ or ‘You should get the ball more,’ or ‘I shouldn’t be yelling at you as much.’”

He could, but he won’t, he decides. He’s no dummkopf, after all.

Up next: Winner advances to Elite Eight on Saturday vs. the Gonzaga-Florida State winner.