The older Michigan State quarterback Brian Lewerke gets, the better his vision, as odd as it sounds. 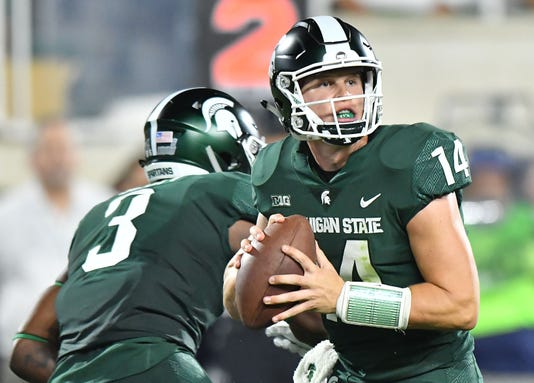 East Lansing — The older he gets, the better his vision, as odd as it sounds. And it’s in the dark where Michigan State’s Brian Lewerke notices the acuity now, sitting by himself in the quarterback room studying game film at the Skandalaris Football Center. He turns the lights off, turns the music up, and with his notebook ready, Lewerke presses play.

He does now, though. And if it didn’t always show last season during a breakout sophomore campaign as Michigan State’s starter under center, Lewerke figures it will this fall, as the 21-year-old checks his own progress and likes what he sees.

“Every year you gain experience, every time you step on the field you continue to grow, and I think my growth from the beginning of last season to the end was night and day,” said Lewerke, who capped a 10-3 season by earning MVP honors in the Holiday Bowl win over Washington State last December. “And now I know the offense like the back of my hand, pretty much. I was still learning a little bit last year, but now I can go out and run anything the coaches ask.”

Every season brings new questions, of course, and the next one starts Friday night, as the 11th-ranked Spartans host Utah State in the opener at Spartan Stadium. But one thing Lewerke has learned since arriving on campus is that it helps to know the answers before the test.

Fast-forwarding from his freshman year, Lewerke says he feels right at home in the film room now. And he’s settling into a routine that he actually picked up last spring while watching “Jon Gruden’s QB Camp” series on ESPN. One episode in particular caught his attention, aside from the one featuring former teammate Connor Cook. It was Gruden’s session with former Miami (Fla.) quarterback Brad Kaaya, where the future Detroit Lions draft pick detailed his own after-hours film-study habits.

On Sundays, he’d watch TV copies of a full game or two featuring the upcoming opponent. On Monday, he’ll go over the coaches’ film of that team’s base defense in open-field standard downs. Tuesday, he hones in on the “situational” football — third-down looks, red-zone plays, and so on. By the end of the week, he has a notepad full of thoughts on defensive coverages, blitz packages, player tendencies and more.

He sure sounds ready, as his teammates and coaches will attest.

“You see a confidence in him, you see an understanding of what we’re doing,” said Salem, in his ninth season on Mark Dantonio’s staff — and his sixth coaching the quarterbacks. “He’s done a great job in the offseason, as far as working on mechanics and footwork and fundamentals. And you really have seen his leadership thrust forward, and see his personality come out.

“He’s got a very calm confidence about him, but he’s got some fire to him. I mean, he’s a competitor and our players know that about him. They see it in the huddle and obviously they’ve seen that exposed on gamedays and him making big-time throws.”

Everyone saw that last season, as Lewerke became the first quarterback in Michigan State history to throw for more than 2,500 yards and rush for more than 500 yards in the same season. In all, he piled up 3,352 yards of total offense — No. 2 on the program’s all-time, single-season list — and became the first MSU quarterback to post back-to-back 400-yard passing games, including a school-record 445 in that triple-overtime loss at Northwestern.

He did all that as a first-year starter — save for a two-week cameo as a redshirt freshman — with a young receiving corps that entered the 2017 season with a combined 14 receptions in college. Now with 10 starters returning on offense, Lewerke has bigger numbers in mind — 3,000 yards passing, at least 25 touchdowns, and a 65-percent completion rate. 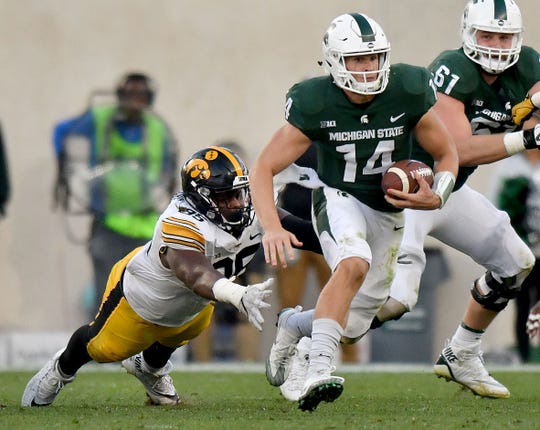 With that in mind, he spent the last nine months tinkering under the hood, fine-tuning his mechanics. Lewerke completed 59 percent of his passes a year ago, and while his scrambling ability probably won a couple of games for the Spartans, he knows he’ll need to hang in the pocket more this season to make this offense really click.

And if you mention that record-setting day at Northwestern, he’ll quickly set the record straight. It would’ve been a win had Lewerke not overthrown a few deep balls — a couple of post routes and a fade he can still see when he closes his eyes. That downfield accuracy was a problem throughout 2017, and part of the solution has been evident even in fall camp, with Lewerke getting the green light from Salem to occasionally ignore a wide-open hitch in order to fire a deep post into coverage, “as long as I let him know,” he says, smiling.

What’s even more apparent, though, is Lewerke’s command of the offense as he makes his pre-snap reads — finding the safeties, checking the cornerbacks’ depth and then raising his voice in ways he didn’t always have to before. The lone starter missing from last season is All-Big Ten center Brian Allen, now an NFL rookie in training camp with the Los Angeles Rams, and Allen’s replacement senses no hesitation from his quarterback in filling that void.

“Some of the calls he makes on the field now, he wouldn’t have made last year — he’d just let the offensive line make ‘em,” said junior center Tyler Higby, who also happens to be Lewerke’s roommate. “But he’s comfortable making those calls now. I think it’s just a whole bunch of confidence with him. And then some of the throws he makes, it’s like, ‘Dude.’ He’s a terrific talent.”

Is he an NFL talent, like Michigan State’s last four multi-year starters — Connor Cook, Kirk Cousins, Brian Hoyer and Drew Stanton? Lewerke knows this season will go a long way in determining that.

"He's got some work to do before he gets to the NFL like those other guys," Dantonio said. "Those other guys are proven commodities. But, I think that he's a rising star.”

That said, what goes up must come down. And Dantonio knows his quarterback’s dual-threat ability — Lewerke averaged 4.5 yards a carry last season, same as running back LJ Scott — comes with inherent risks, whether it’s the designed quarterback runs or escaping pressure in the pocket. Lewerke fractured his tibia on a fourth-down scramble late in a loss to Michigan two years ago.

“Got to keep him healthy — I don't think there's any question about that,” Dantonio said, noting Lewerke’s offseason work to add strength and a bit more weight — he’s up to 220 pounds now. “He needs to stay healthy.”

Still, there’s a healthy optimism here as Michigan State’s season gets underway, and it starts with the quarterback, who needs no help understanding what he’s looking at this season.

“It’s a huge opportunity,” he said.

And Brian Lewerke is eager to see what they can do with it.