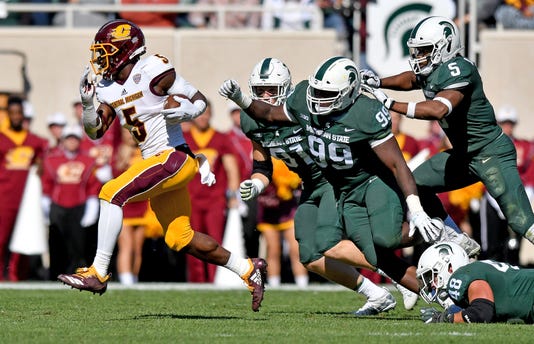 And that’s a good sign for this Michigan State team. A necessary one, actually, since it appears as if the Spartans’ offense may never get settled in, hampered by a unstable foundation and now another troubling crack in a shaky depth chart.

But, yes, there’s also something to be said for getting too comfortable, which is what the MSU players and coaches were talking about in the immediate aftermath of Saturday’s 31-20 win over Central Michigan.

After dominating for most of three quarters, the Spartans’ defense let up just enough to give the Chippewas some life and, after an onside kick and a couple trick plays led to 17 unanswered points, “all of a sudden, it gets interesting,” as Mark Dantonio put it.

That’s one word for it. Mike Tressel, his defensive coordinator, probably had a few others as he was forced to reinsert some of his starters in the fourth quarter.

They didn’t in wins over Utah State or Indiana, or more importantly in the loss at Arizona State. And if it happens again, chances are the Spartans will meet a similar fate as they did there in the desert.

Because they’re heading back into Big Ten play now, and what Dantonio calls “the meat of the schedule” in October, with home games against Northwestern and Michigan sandwiched around a trip to Penn State.

“Then if you play well in October, you’re competing for championships in November,” he added. “And that’s our goal.”

If it seems like an unrealistic one right now, it’s because Michigan State’s offense still can’t find a rhythm, or even half its starting lineup, for that matter. Already missing a handful of first-teamers, the Spartans lost another key piece Saturday when leading receiver Cody White suffered a broken hand trying to make a diving catch just before halftime. Dantonio offered no timetable for White’s recovery after the game, saying only he expects he’ll play again this season.

“They all assure me that they’ll be back,” Dantonio said, smiling as he joked, “I can’t assure you.” 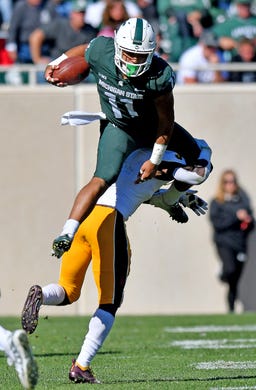 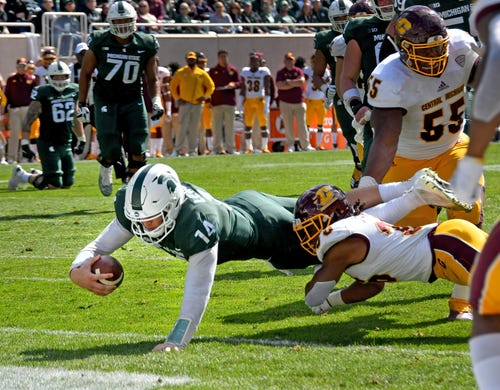 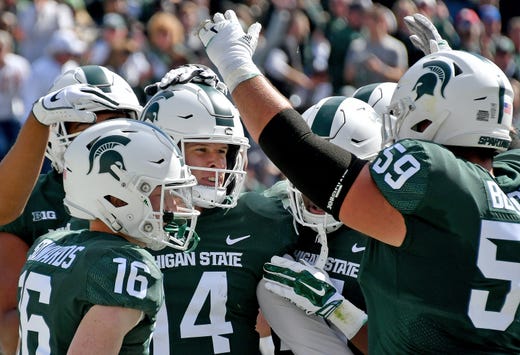 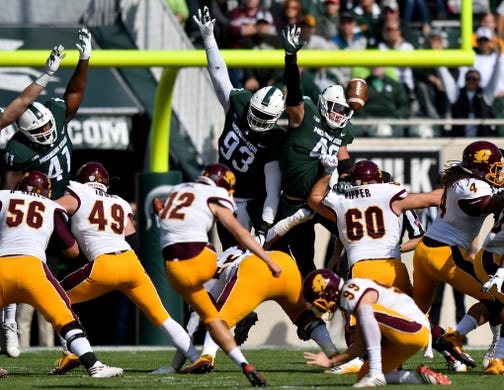 Michigan State running back Connor Heyward sprints up the sideline for a first down early in the first quarter. Dale G. Young, Detroit News
Fullscreen 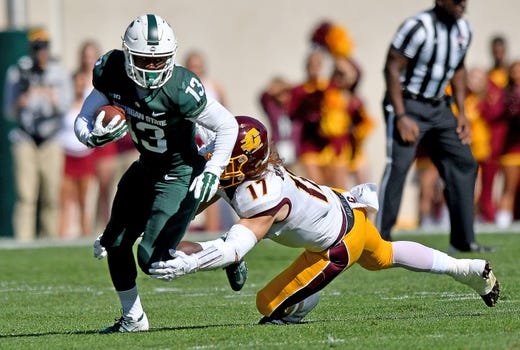 Michigan State receiver Laress Nelson, left, turns up the field with the football, with his eyes on the end zone. Dale G. Young, Detroit News
Fullscreen 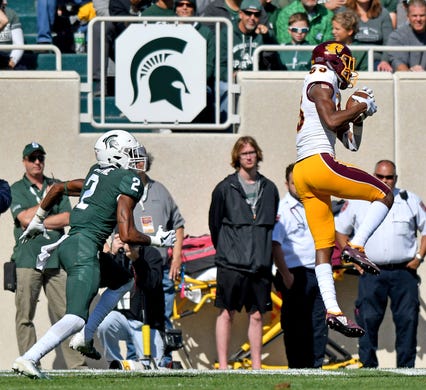 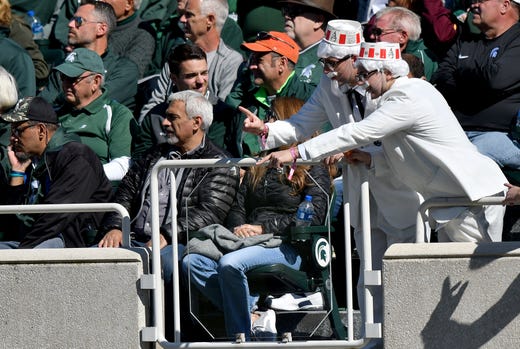 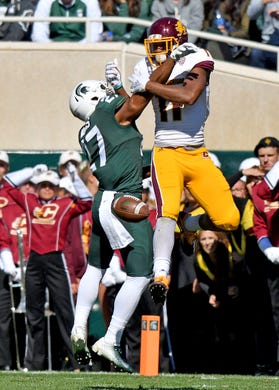 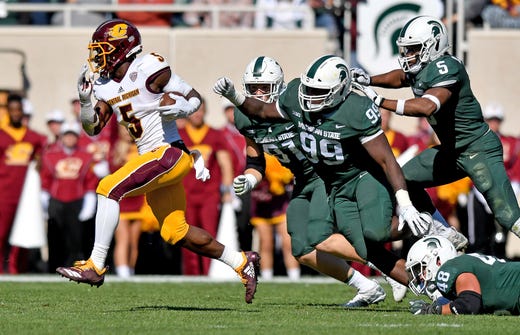 Central Michigan running back Jonathan Ward, left, leaves a crowd of Michigan State defenders in his wake in the fourth quarter. Ward was held to 34 total yards of offense on the day. Dale G. Young, Detroit News
Fullscreen 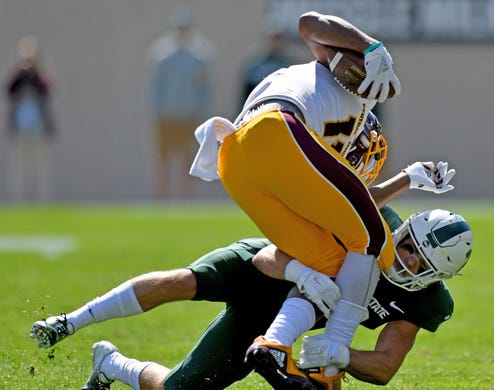 Michigan State's Matt Morrissey brings down Central Michigan's JaCorey Sullivan short of a first down and forces CMU to punt in the first half.   Dale G. Young, Detroit News
Fullscreen 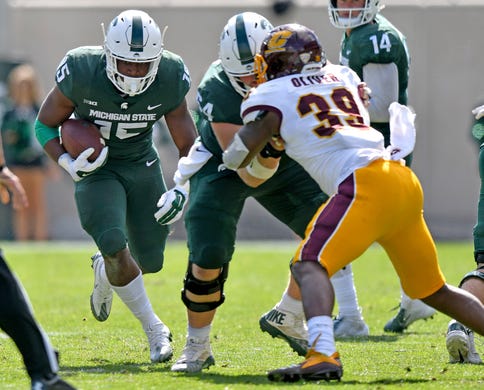 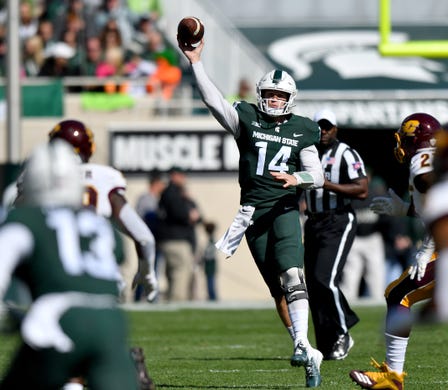 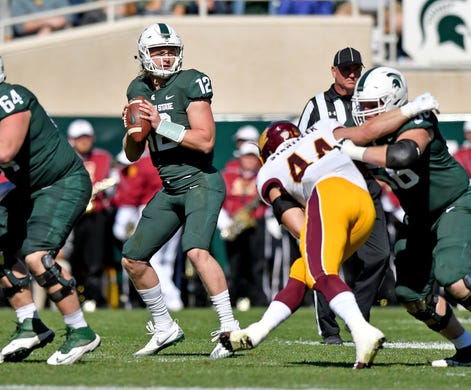 Michigan State backup quarterback Rocky Lombardi looks for an open receiver when he gets to play a series of downs in the fourth quarter. Dale G. Young, Detroit News
Fullscreen 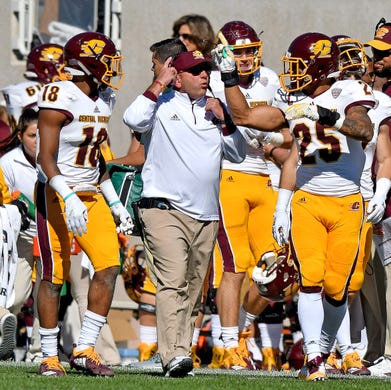 Central Michigan head coach John Bonamego talks with his players on the sidelines while on a brisk walk to the other end of the field. Dale G. Young, Detroit News
Fullscreen 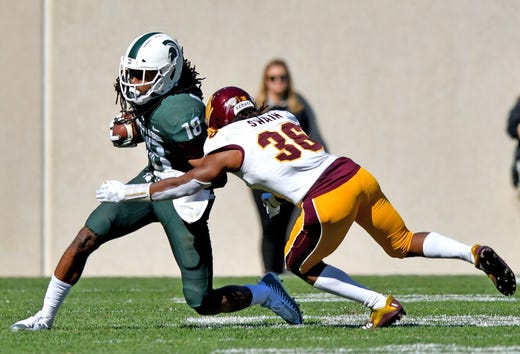 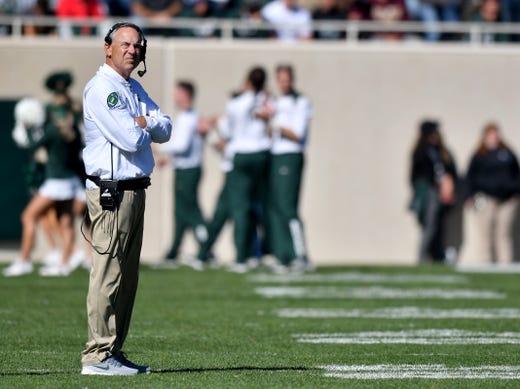 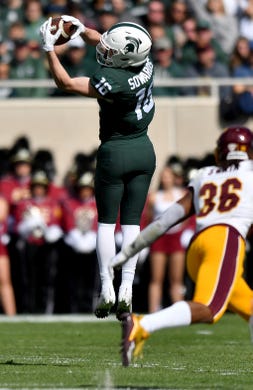 Michigan State's Brian Sowards leaps high into the air to pull in this pass over the middle in the first quarter. Dale G. Young, Detroit News
Fullscreen 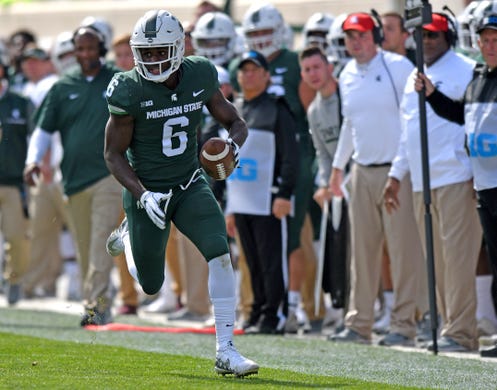 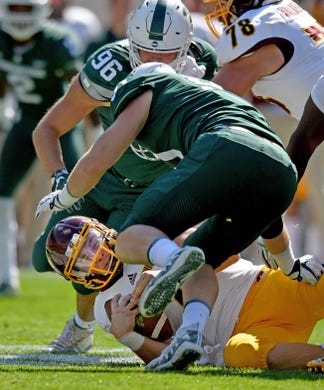 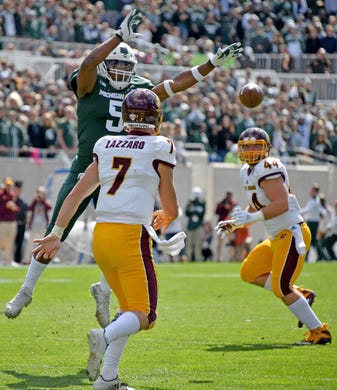 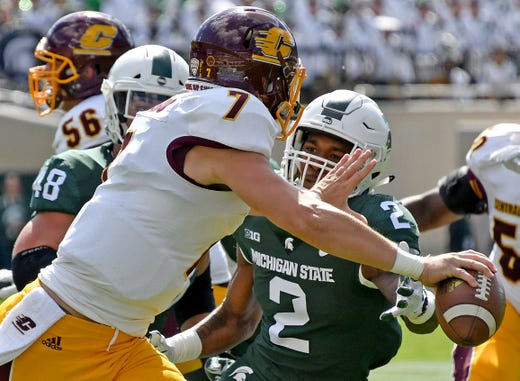 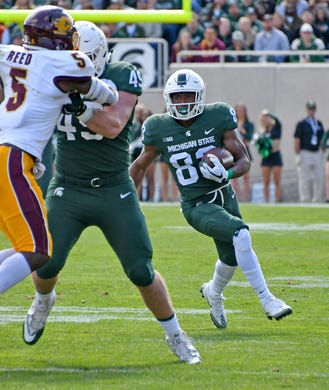 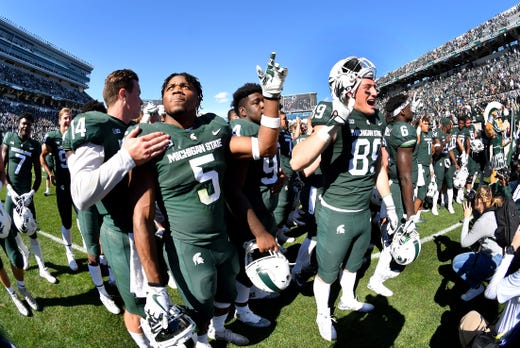 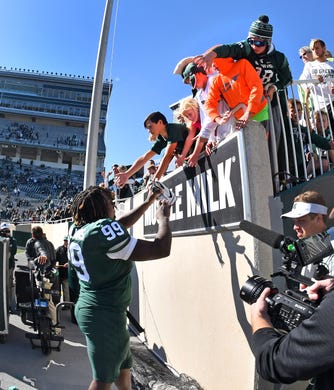 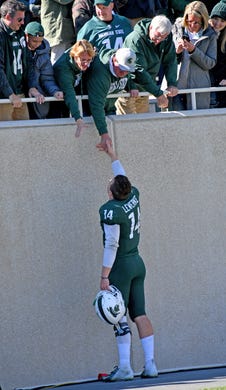 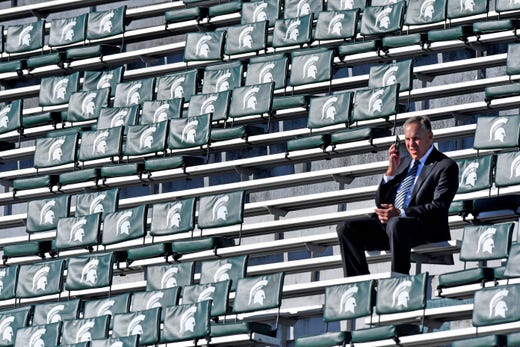 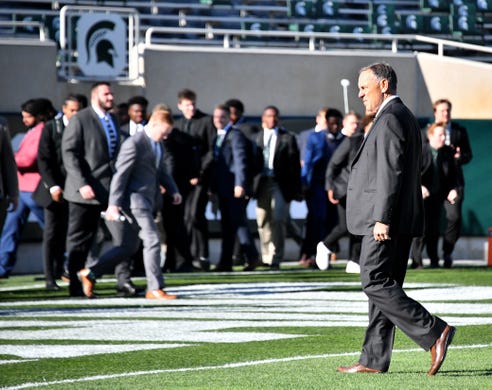 Frankly, nothing seems a sure thing with this Michigan State team a month into this season. The offensive line has done far more juggling than jelling through four games, and quarterback Brian Lewerke still is trying to do too much to compensate for a ground attack that’s inconsistent, at best.

The only constant thus far has been a run defense that's "obviously special,” in Tressel's words. Michigan State entered the game ranked No. 1 in the country at stopping the run, and they'll stay there even after giving up a season-high rushing total — at least by their lofty standards — to an overmatched Mid-American Conference opponent.

Central Michigan finished with 63 yards rushing on 22 carries, but half of that total came from quarterback Tommy Lazzaro’s scrambling. (“He got out way too many times,” Dantonio said.) And through three quarters, the Chippewas had managed just 15 carries for 29 yards.

That’s hardly a surprise considering CMU came in ranked 128th of 129 teams nationally in total offense, and 110th on the ground. But it’s still another notch in the Spartans’ belt just the same. Saturday marked the seventh consecutive game they’ve held an opponent under 100 yards rushing dating to last season. (It’s the 11th in the last 12 games, in fact, with the mid-November mauling at Ohio State the lone exception.)

More important, though, is the confidence that’s growing within that defensive unit, a group that produced two interceptions, three sacks — that’s 12 in four games — and six tackles for loss Saturday, much of it on their own.

“Coach Tressel allows a lot of the guys to go out there and kind of do their own thing,” defensive tackle Mike Panasiuk explained afterward. “There were a couple plays today where I called stunts out there by myself.”

They worked, too. And when that happens, when the defensive line is able to start calling the shots up front, literally and figuratively, “it just makes everyone more comfortable,” Panasiuk added. The linebackers playing downhill. The safeties and cornerbacks in coverage. Even the coaches on the sideline.

Everyone except for the opposing quarterback, really. And Saturday, Lazzaro looked plenty rattled after an opening drive produced a field goal thanks to a 35-yard pass play on a flea flicker. Michigan State’s defense allowed just two first downs — and 47 total yards — on the next eight drives.

“Yeah, definitely,” Panasiuk said, when asked if he sensed it, too. “Because if we’re talking out there and doing our stuff and we’re bringing it every single play and getting after the quarterback, the other team is gonna be, like, ‘Oh, wow, this team’s the real deal.’”

The defense certainly might be, based on what we’ve seen. The offense? Well, as Dantonio said, “every football team is always a work in progress.” But for now, they've got plenty of catching up to do. Just like this latest opponent.