Niyo: Michigan's Brazdeikis vow(el)s to make name for himself

The Lithuanian-born Canadian might give announcers fits with his multisyllabic name, but the freshman wants to leave the biggest struggle for those guarding him on the court.

Niyo: Michigan's Brazdeikis vow(el)s to make name for himself 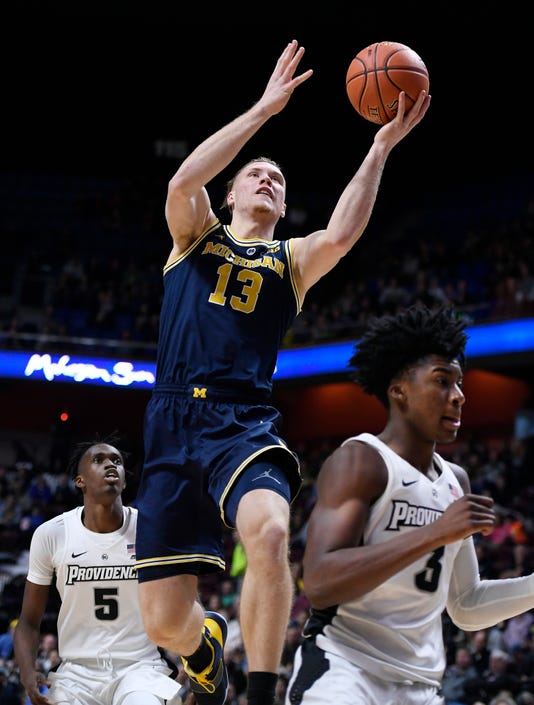 Ann Arbor — The full introduction — much like the proper pronunciation — will take some time yet.

But Michigan’s Ignas Brazdeikis is well aware that Wednesday’s nationally televised nightcap in the ACC-Big Ten Challenge — the seventh-ranked Wolverines will host No. 11 North Carolina, with Dick Vitale providing the color on ESPN’s broadcast — is another opportunity to announce his arrival in college basketball.

And that, quite clearly, is something he revels in.

“Every time there’s a big game,” the 6-foot-7 freshman forward said Tuesday, “I look at it as an opportunity to make noise.”

Vitale certainly will chime in as well, as Roy Williams' powerhouse program makes its first-ever visit to Ann Arbor. Only six games into his collegiate career, Brazdeikis is both Michigan’s leading scorer and still a relative unknown, even after his impressive start this season, highlighted by an 18-point, seven-rebound performance in the rout of defending national champ Villanova two weeks ago in Philadelphia.

“I did not know anything and I hate to say it like this, Brazdeikis — or whatever his name is — my God, he can really play,” Williams said Tuesday, stumbling awkwardly over the Lithuanian-born Canadian’s name. “I don't have a clue where the crap he came from, but I know he can really play when I watch him on tape.”

All those vowels aside, it hasn’t taken long for Brazdeikis, a top-50 recruit who was the centerpiece of John Beilein’s most recent recruiting class, to make a name for himself this fall. (It’s “Braz-DAY-kiss,” by the way.)

He’s older than Beilein’s typical incoming freshman — he’ll turn 20 in early January — and carrying a well-defined 215 pounds on his 6-7 frame, he’s not shy about asserting himself on the court, routinely attacking the basket with authority on offense.

He did that immediately upon his arrival on campus, talking trash as he challenged Charles Matthews in an open-gym workout and drew the attention of Zavier Simpson, Michigan’s tenacious leader who immediately dubbed the freshman a “pit bull.”

More: UM's Beilein on Big Ten: 'It's going to be a monster'

But he’s not like most others Beilein has coached as freshmen, either in his demeanor or with his skill set.

Brazdeikis is shooting 51.7 percent from the field — 57 percent from inside the 3-point line — and nearly 82 percent at the free-throw line, a place he’s getting on nearly a quarter of his possessions. And while his team-high usage rate is hovering above 28 percent thus far, it’s mostly without plays being called for him in the half-court offense. That’s particularly helpful for this team, which isn’t nearly the same threat from the perimeter that Michigan was a year ago. Often when the Wolverines need a bucket, Brazdeikis, who is averaging 15.7 points and 5.8 rebounds, will go get one on his own.

Sometimes, his aggressiveness driving the lane gets him trouble, and against an athletic team with the kind of elite talent North Carolina boasts — Brazdeikis played alongside the Tar Heels’ star newcomer, Nassir Little, on the prep all-star circuit — Wednesday will be an altogether new challenge. But again, the freshman sounds eager to test himself, and to do what he says comes naturally.

“I kinda just play without thinking,” he said. “So when there’s an opening to attack, I’m gonna make that play. …

“Obviously, I’m not playing with a blindfold on. I know what I’m doing on the court. And Coach Beilein does a great job of giving me freedom.”

With freedom comes responsibility, of course, and that’s part of what has made Michigan’s early-season dominance so intriguing. Because as Williams noted Tuesday, “it's a completely different team” than what we’re used to seeing from Beilein, the renowned offensive whiz. At least up until last season’s surprising Final Four run, that is.

Michigan boasts the No. 1-rated defensive team in the country, per KenPom’s efficiency metrics. And for Brazdeikis, that means a crash course almost every day from assistant coach Luke Yaklich.

“We have very complex concepts on defense,” Brazdeikis said. “And it’s different every single game.”

And if there’s any freshman moments, this is where the coaches see them.

“He looks at me, like, ‘There’s more to this?’” Beilein said, laughing. “But I think he’s really accepting of that, too, because he wants to be a really good player. … He wants to grow. But when you have a freshman playing this many minutes, it does stand out — especially defensively — that there’s a lot of area to grow there.

“And he will. He will, there’s no question about it. He’s just gonna keep getting better. Because he seems to have a capacity to grow more quickly than many freshmen usually do.”

And as he does, so will the noise.