After 40 years in the suburbs, the NBA franchise reaffirms its commitment to the city by entering a partnership with Wayne State on a $25 million basketball arena.

Tellem talks about partnering with Wayne State and the benefits of having the G-League affiliate closer to the Pistons in Detroit. The Detroit News

If you need a mover in or around Detroit, Arn Tellem’s your man.

And if you needed any more evidence of that, there he was Wednesday, seated on the dais for another major announcement in the Motor City. This time it was at Wayne State, where the university unveiled its plans for a new $25 million arena that’ll also be home to the Pistons’ developmental league team when it's completed. 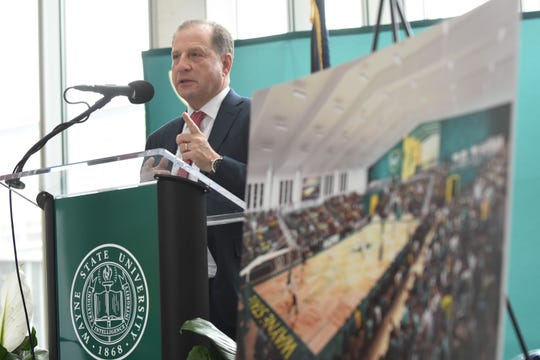 The project, two years in the making and unanimously approved Wednesday by Wayne State’s board of governors, is just the latest investment in Detroit involving the Pistons. It’s not nearly as dramatic as the franchise’s seismic shift in 2016, relocating from The Palace of Auburn Hills to the Red Wings’ new Little Caesars Arena downtown, or its $65 million headquarters — a joint venture with Henry Ford Health System — set to open in the New Center neighborhood later this fall.

But it’s not hard to connect the dots here in “what will be a whole basketball corridor here," as Tellem, the Pistons’ vice chairman, described it Wednesday. All you had to do was follow the bread crumbs Tellem and his team have been dropping for the last few years as the Pistons finally found their way back home, as it were.

This latest venture “really ties us further into this community,” Tellem said. “We’re all in on Detroit.”

Civic pride aside, this 30-year lease agreement with Wayne State makes plenty of sense at little added cost — just under $900,000 annually in rent — to the Pistons and their owner, Tom Gores.

WSU president talks about the school approving plans to build a $25-million arena and partnering with the Pistons to bring a G-League team to Detroit. The Detroit News

The 70,000-square-foot arena — funded by $22 million in bonds and $3 million in private fundraising — will be ready in time for the 2021-22 season, university officials say, and that matches neatly with the expiration date on the Pistons’ current deal with their Gatorade League affiliate, the Grand Rapids Drive.

If that G-League team stays put in west Michigan, the Pistons “have a commitment that we can get an expansion team,” Tellem said of the 27-team developmental league where all the teams are either single-affiliated or owned by an NBA team. “We’ll see how our discussions are resolved as we talk with the NBA and the Grand Rapids team. … I think we’ll have a clearer sense in the next few months.”

Clearly, though, the idea of having its minor-league team based out of its own practice facility and playing it’s 20-plus home games a season less than a mile away appeals to the Pistons. Most NBA teams are closer to their G-League affiliates than the Pistons are currently, and some — like the Los Angeles Lakers — share a training facility as the Detroit soon will do.

Tellem points to the example of former Pistons’ first-round pick Henry Ellenson, who played in just two G-League games in 2017-18 partly due to the two-hour distance between Detroit and Grand Rapids, “and that’s a crime.” Particularly in a league where the emphasis on player development grows in importance each year. Early-entry candidates are only going to get younger, too, with the NBA likely to get rid of the current 19-year-old age limit by 2022.

“The G-League more and more is becoming a true minor-league club, where players are going back and forth all the time,” Tellem said. “All of our young players … if they’re not playing, they should be down there developing. And here now they can practice at our performance center, get in a car and go right to play. They can practice with the NBA team, get to be around NBA coaches, be around NBA trainers and still go and play games here. So it’s gonna be a huge advantage for us.”

Still, it was Rob Fournier, Wayne State’s athletic director for the last two decades, who got the ball rolling on this whole deal, placing a call to Josh Bartelstein, the Pistons chief of staff and a former University of Michigan basketball captain, not long after the team’s plan to move downtown was officially announced in 2016.

“You never know what happens when you make a cold call,” Fournier said, adding with a laugh that he figures Bartelstein “ran a security check on me after the call.”

Before too long, though, Fournier says he was sitting in his office meeting with Tellem, piecing together the plan “and thinking to myself, ‘Damn, this thing is getting serious.’”

The 65-year-old Tellem has had that effect on plenty of government officials and business leaders in this city ever since he arrived in Detroit in September 2015, lured away from his job as one of the most influential — and socially-conscious — player agents in sports to be Gores’ top lieutenant with the Pistons. Tellem quickly made inroads here and played a crucial role in brokering the deal to bring the NBA team and its business operations back downtown after nearly 40 years in the suburbs in Oakland County.

“When I met with Tom Gores in the beginning,” Tellem said Wednesday, “what we discussed was, while we care about winning, first and foremost, the Pistons are an incredible platform to bring people together, form partnerships and inspire change in the community. Those were Tom’s exact words. And really, I’m here to advance that goal.”

So consider this another milepost, then, in achieving that goal, whatever you think of Wayne State’s reasoning for spending this kind of money on an athletic facility.

Fournier actually teased this announcement nearly eight months ago during a halftime interview on the local broadcast of the Warriors’ football season opener.

“The next piece of the puzzle will be the biggest thing in the history of Wayne State athletics,” he said then.

He wasn’t joking, either. This is much more than a new press box at Harwell Field, where the baseball team plays, or even the $2.2 million athletic training center that opened last year. And this new 3,000-seat basketball arena — Wayne State plans to sell the naming rights — will be a far cry from what the varsity teams currently call home.

The men’s team dresses for games in a glorified towel room inside the Matthaei Center, a multi-use facility that opened in 1965. And as university president M. Roy Wilson joked Wednesday, “my high school basketball (gym) was better than Matthaei.”

Wilson called Wednesday’s announcement a “watershed moment” for the university. And beyond the obvious perks for the athletic department, he pointed to the internship and apprenticeship opportunities this Pistons partnership will create in areas like sports marketing, physical therapy and the entertainment business. The Pistons also plan to host youth leagues and summer camps there, and Wayne State expects to fill the venue with AAU tournaments and high school games as well.