Saturday’s 10-7 loss to Arizona State was so jarring. So inexplicable. So hard to comprehend, let alone explain.

East Lansing — It was midway through John L. Smith’s penultimate season as Michigan State’s head coach that he delivered that now-infamous line in a halftime interview.

“The kids are playing their tail off,” he barked, writing his own sideline epitaph as he spoke, “and the coaches are screwing it up!"

He was gone barely a year later, replaced soon after by Mark Dantonio. A man with a plan, and a coach who knew exactly what he wanted to do and how he’d get it done. And Saturday night, this was the moment the record books would make official what everyone by now agreed: Dantonio is the most successful football coach in Michigan State history. 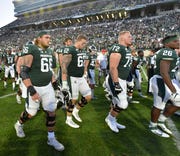 MSU players are dejected as they walk off the field after their loss. (Photo: Todd McInturf, The Detroit News)

Yet that’s what made the end of Saturday’s 10-7 loss to Arizona State so jarring. So inexplicable. So hard to comprehend, let alone explain.

And as he stood at the podium after the game, still tied with Duffy Daugherty as the Spartans’ all-time winningest coach, Dantonio simply couldn’t.

How did the Spartans let this win slip away? How did all those drives that crossed midfield end without points? How did that vaunted defense suddenly come unraveled in the final few minutes? How did the confusion end up ruling a day that supposed to be a coronation?

“I don’t know, guys,” Dantonio said, finally, as a long answer after a long day came to an exasperated end. “Sometimes you’re on the sideline and you’re dealing with it and … it’s a lot easier to see it from afar. It’s up close, and you’re trying to deal with it. It’s happening fast.”

But that’s why these college coaches make all that money, and, quite frankly, that’s why Dantonio has been on the winning end of so many of these kind of games during his 13-year tenure at Michigan State.

That’s also why everything that took place was so puzzling, though. Particularly at the end, as the clock ticked down and ... the coaches screwed it up.

They weren’t the only ones, obviously, and in his postgame comments, Dantonio reverted to passive-aggressive responses when it came to the striped shirts, among others. All the convoluted delays and the clock issues, the questionable flags and the blown calls, including one the refs missed on what proved to be the game’s final play — or replay, as it were.

“I think they need to take a good hard look at the officiating, and that’s all I’ll say,” Dantonio said, though he didn’t quite stop there. 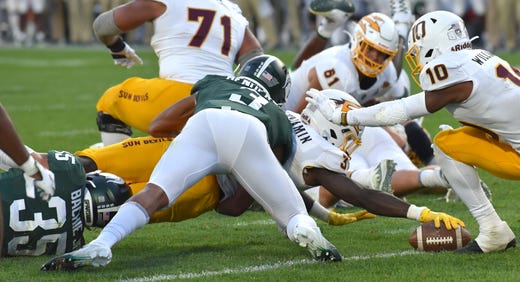 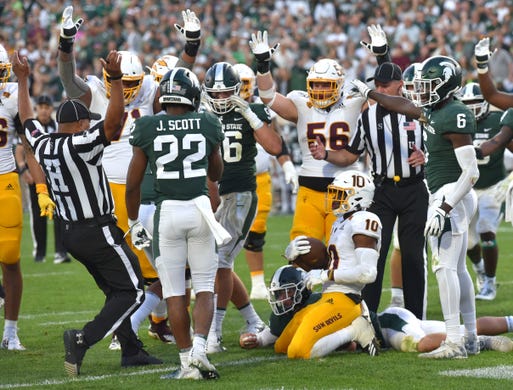 Arizona State players hold their hands up as they win the game with this touchdown. Todd McInturf, The Detroit News
Fullscreen 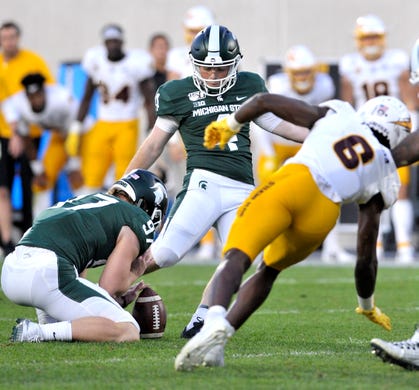 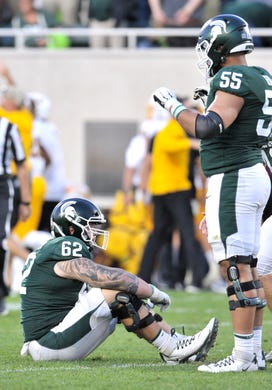 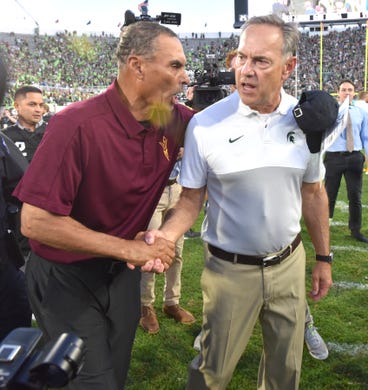 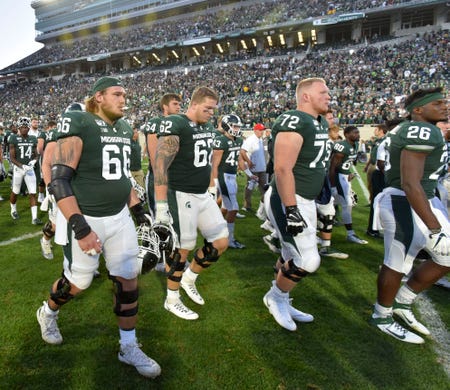 MSU players are dejected as they walk off the field after their loss. Todd McInturf, The Detroit News
Fullscreen 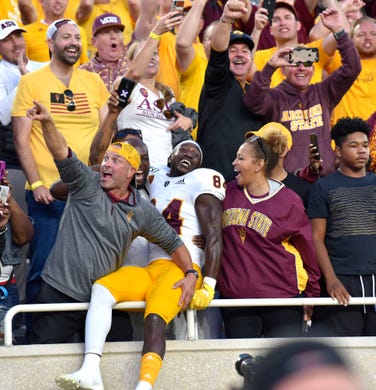 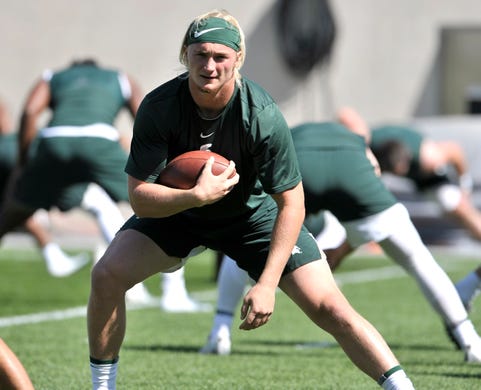 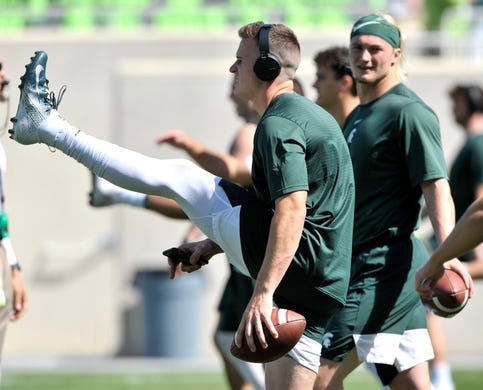 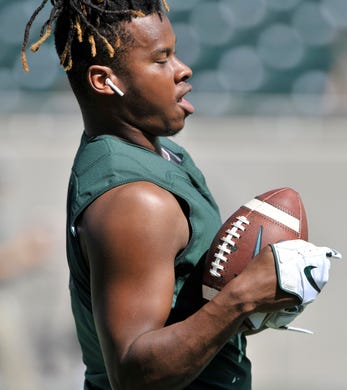 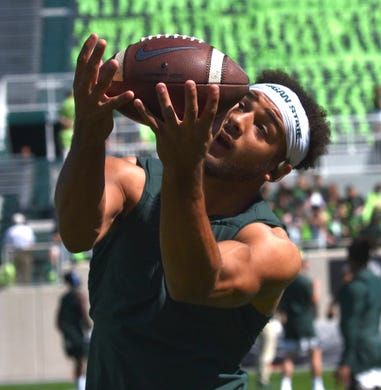 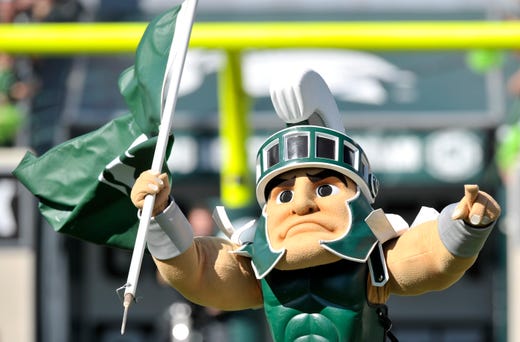 Sparty runs out onto the field before the team. Todd McInturf, The Detroit News
Fullscreen 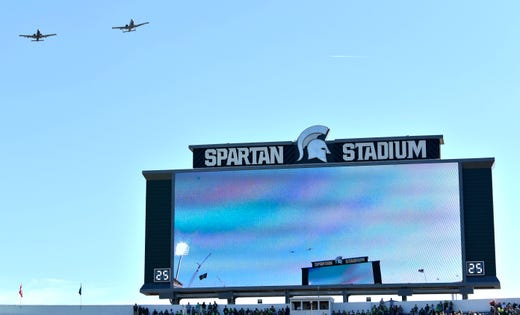 Two A-10 Warthogs, from Selfridge Air National Guard Base in Harrison Township fly over the stadium before the game. Todd McInturf, The Detroit News
Fullscreen 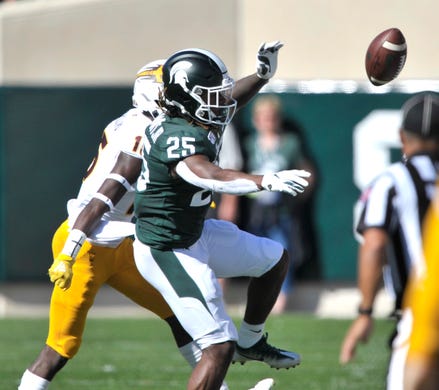 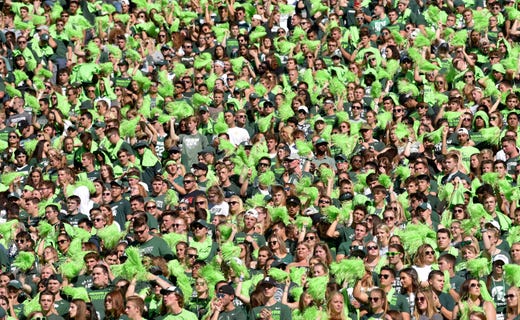 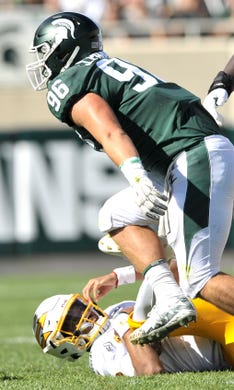 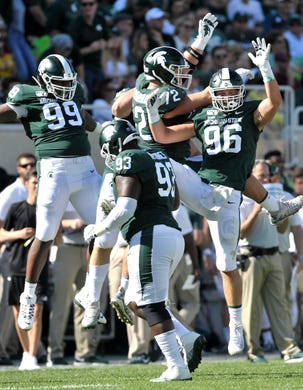 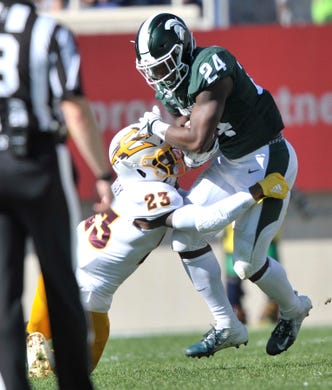 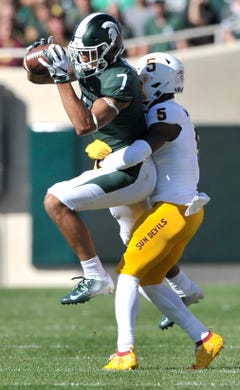 MSU's Cody White (7) makes a catch for a first down in the first quarter as he is tackled by Arizona State's Kobe Williams (5). Todd McInturf, The Detroit News
Fullscreen

MSU's Matt Seybert (80) gains extra yardage and a first down on this reception as Arizona State's Aashari Crosswell (16) and Kobe Williams (5) make the tackle. Todd McInturf, The Detroit News
Fullscreen 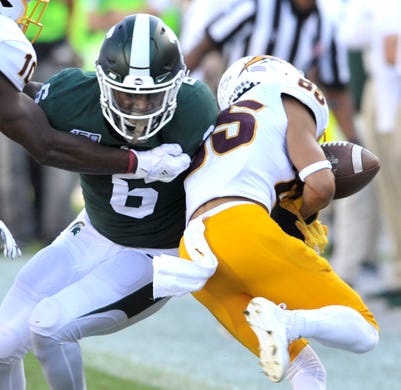 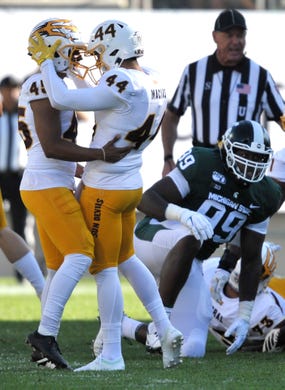 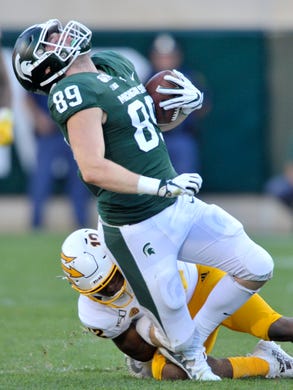 MSU's Matt Dotson (89) is pulled down by Arizona State's Kejuan Markham (12) after gaining a first down on this long reception in the third quarter. Todd McInturf, The Detroit News
Fullscreen

MSU's Kenny Willekes (48) puts a hit on Arizona State's Eno Benjamin (3) to stop him behind the line of scrimmage in the third quarter. Todd McInturf, The Detroit News
Fullscreen 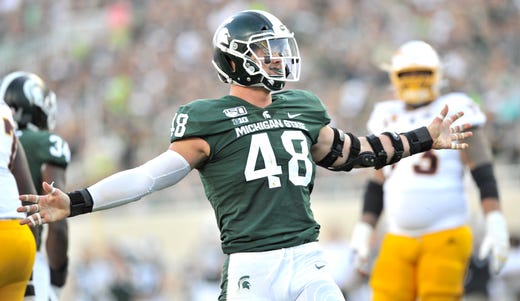 MSU's Kenny Willekes (48) celebrates his hit on Arizona State's Eno Benjamin (3) to stop him behind the line of scrimmage in the third quarter. Todd McInturf, The Detroit News
Fullscreen 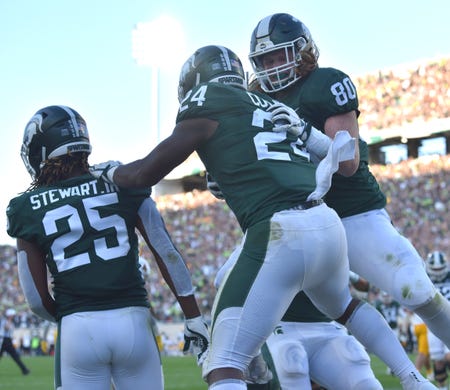 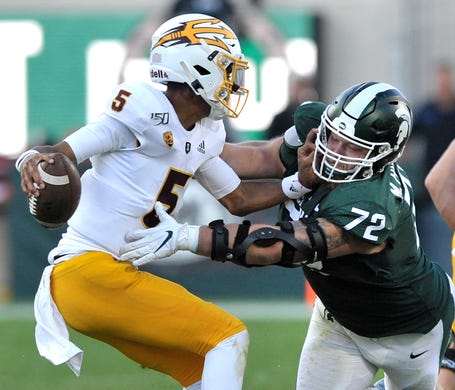 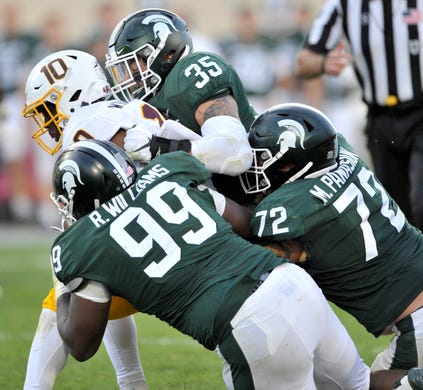 Arizona State's Kyle Williams (10) is tackled by a host of MSU defenders in the fourth quarter. Todd McInturf, The Detroit News
Fullscreen 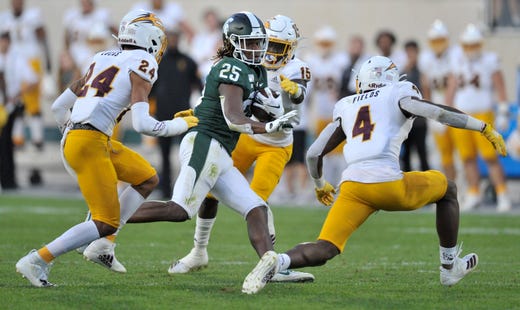 MSU's Darrell Stewart (25) tries to escape a host of Arizona State defenders near the end of the game. Todd McInturf, The Detroit News
Fullscreen

But while they do that, he’d better take an even harder look at the coaching. Because that’s where the blame really lies here, from the conservative play-calling — a Connor Heyward handoff on second-and-20? — to some egregious game management.

In the end, it wasn’t so much the decision to send Michigan State’s field-goal unit onto the field with 11 seconds left and the ball at Arizona State’s 24-yard line. It was the delay that preceded it, and the confusion that followed — not to mention some of the earlier decisions that effectively forced Dantonio's hand — that ultimately robbed the Spartans on what was supposed to be a record-setting Saturday.

Brian Lewerke’s long completion to Darrell Stewart had put the Spartans in position to take a shot at the end zone before settling for overtime, if need be. As Arizona State head coach Herm Edwards once famously said, "You play ... to win ... the game." And after a quick spike on the ensuing play to stop the clock, Lewerke fully expected to do just that.

He looked to the sideline, then grew impatient as he waited for offensive coordinator Brad Salem to signal in another play. Finally, he got it, and the Spartans, who were out of timeouts for no good reason, began to line up with nearly half the 40-second play clock already gone.

“But then I think Coach D wanted to go for the field goal,” Lewerke said later, shrugging.

Indeed, on second thought, the head coach did.

“Initially, we were gonna try a shot down there and then I said, ‘Hey, we need to kick it,’” Dantonio said.

So the offense came running off the field and the field-goal unit came running on with less than 15 seconds on the play clock. Last but not least was kicker Matt Coghlin, who'd missed a pair of first-half kicks after a perfect start to the season. It was a fire drill that didn't need to happen, and everyone in the stadium could sense it. Still, they got the snap off just in time — with one second left on the play clock — and the kick was good.

But the celebration was short-lived — and overtime no longer guaranteed — because it turned out the Spartans had 12 men on the field. That was news to the officials on the field, apparently. And so was the fact that the Sun Devils’ Cam Phillips illegally hurdled over the Michigan State line on Coghlin’s second attempt, a 47-yarder that missed badly wide left and ended the game.

“That should be a penalty,” Dantonio grumbled later. “And it’s not reviewable.”

But he’s also correct when he notes that it didn’t have to come down to that. The game, or that final kick, a frantic situation that easily could've been avoided.

“There’s a lot of opportunities prior to that where we could’ve won the football game,” Dantonio said.

There’s some where they might’ve lost it, too. That's obvious after a game in which Michigan State crossed midfield a half-dozen times and only score seven points. It goes without saying, too, when the defense allows just 216 yards and ends with defensive tackle Raequan Williams saying, "It's on us." If that doesn't tell you how unevenly the ledger is stacked for Michigan State right now -- that the defense feels obligated to pitch a shutout to win -- I don't what will.

But even acknowledging that, the coaching came up short Saturday. Take Arizona State’s final possession: an 11-play, 75-yard drive that resulted in its lone touchdown. The big play was a 40-yard bomb from true freshman quarterback Jayden Daniels to Brandon Aiyuk, who’d gotten behind a stumbling Josh Butler along the sideline. But the biggest was the fourth-and-13 that Arizona State converted after Dantonio called his final timeouts -- not one, but two back-to-back -- with the clock stopped.

It worked until it didn’t, as the Spartans played it safe and rushed only three. Then they watched as Daniels scrambled 15 yards for the first down — “That should not happen,” Dantonio grumbled — and then scampered for another first down a few plays later, setting up the go-ahead score.

Asked about burning both his timeouts there, Dantonio dismissed the question.

“We didn’t need the timeout, anyway,” he said. “Because we could spike the ball. We could’ve spiked it to stop the clock.”

They did, of course. And they could've again, when the circumstances called for it, but they didn’t.

As for why, only the head coach can say for sure. But he couldn't. Or wouldn't.