Forty years later, they’ve still got stories to tell. But some are shared — like the one we all know by heart — and some are kept.

Forty years later, they’ve still got stories to tell. But some are shared — like the one we all know by heart — and some are kept.

“And believe me when I tell you this,” says Mike Eruzione, one of the authors of the fabled “Miracle on Ice” that took place 40 years ago this weekend, “when we get together, we very rarely talk about the Olympics. 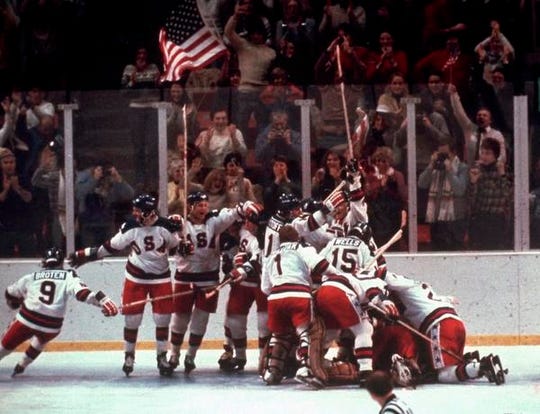 The U.S. hockey team pounces on goalie Jim Craig after a 4-3 victory against the Soviet Union in the semifinals of the 1980 Winter Olympics in Lake Placid, N.Y. (Photo: Associated Press)

“We don’t talk about what happened in Lake Placid. We talk about our lives today and what we’re doing and where we’re going.”

Yet as the members of the 1980 U.S. men’s hockey team arrive in Las Vegas this weekend for a 40th anniversary celebration — of their stunning upset of the Soviet Union and the gold-medal triumph that followed — they understand the myth and the magic they created. The generations of players they’ve inspired and the doors they’ve opened.

And hardly a day goes by where they aren’t reminded why the memories still evoke such strong feelings all these years later, as Mark Johnson, the U.S. team MVP who now serves as Wisconsin’s women’s hockey coach, recalled with a laugh earlier this week.

“People will tell you exactly what they were doing,” the 62-year-old Johnson said, “and the excitement and energy as they tell it to you is just priceless.”

More precious, too, because they harken back to a time when Americans discovered “this impossible dream,” as ABC broadcaster Al Michaels dubbed it, really was possible and everyone cheered. One nation, indivisible.

Or so it seemed.

“I’ll think back upon it always as it galvanized the country,” Michaels said. “It was an event that brought people together. There are terrible events that bring the country together for short periods of time, obviously 9/11 being most significant. The country comes together and then (we) kind of splinter apart again. This brought the country together in a way that I’ve never seen.”

Before or since, which is part of the reason why Sports Illustrated declared the “Miracle on Ice” the greatest sports moment of the 20th century. And why it’s hard to imagine one in the 21st century might top it.

That was a different time, in so many ways. The Iran hostage crisis was only a few months old. Amid the Cold War, the Soviet invasion of Afghanistan seemed a world away, but President Jimmy Carter was threatening a boycott of the 1980 Summer Olympics. Gas prices were soaring, and the U.S. economy had just entered another recession, with inflation reaching levels not seen since the end of World War II.

And yet here was a group of All-American college players — bonded by six months of training and led by a gruff taskmaster of a coach in Herb Brooks — facing off against what was arguably the greatest hockey team ever assembled. They were underdogs, and for two weeks in sleepy village in upstate New York, they were all of us.

“Herb used to call us a lunch-pail, hardhat group of guys, because that’s what we were,” Eruzione said. “And people saw that.”

Of course, the Americans had already seen firsthand what they were up against in the Soviets, who’d won the previous four Olympic gold medals and 14 of the last 17 world championships. A week before the Olympic tournament, the Soviets, who’d also demolished a team of NHL All-Stars in 1979, embarrassed the U.S. team, 10-3, in an exhibition at New York’s Madison Square Garden.

And as Slava Fetisov, then a 21-year-old rising star for the Red Army team, once told me — not long after he’d finished his Hall of Fame playing career in Detroit — there was a pre-Olympic visit to the Kremlin where “government people told us, ‘You can lose to anybody but the Americans.’ It was kind of a joke, because no one thought it possible.” 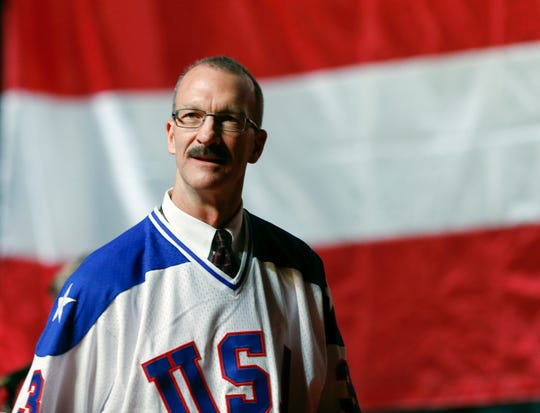 It’s that arrogance that Brooks was banking on as the American entered the medal round riding a wave of momentum, rallying for an opening tie against Sweden, then surprising medal favorite Czechoslovakia and rattling off three more wins in group play.

And after Johnson’s last-second goal in the first period against the Soviets knotted the game at 2-2, the script took another turn in the Americans’ favor, as Brooks’ counterpart, Viktor Tikhonov, benched his star goaltender Vladislav Tretiak. The Soviets dominated the second period, but only led by a goal entering the third.

“You gotta remember: This was a team that just didn’t lose, you know?” said Ken Morrow, a defenseman who was one of two Michigan natives on the roster. “They didn’t find themselves behind in any games late in the third period.”

But they did in this one, and when Eruzione’s goal midway through third put the U.S. up, 4-3, the American dream — and the Soviet nightmare — “suddenly became a little bit more realistic,” said Johnson, who’d scored the tying goal — again — on a power play only a couple minutes earlier.

The last 10 minutes of the game felt “like an eternity,” Eruzione says. But the last 10 seconds were immortalized by Michaels’ call at the end:

“Eleven seconds, you’ve got 10 seconds, the countdown going on right now! Morrow up to Silk. Five seconds left in the game. Do you believe in miracles? ... Yes!”

“Whenever they play clips of that, I get to hear my name called,” laughed Morrow, 63, who went on to win four Stanley Cups with the New York Islanders and now serves as the team’s director of pro scouting. “I thank Al Michaels for that every day.”

That night, Brooks refused to make the U.S. players available to the media. Instead, the lunch-pail gang headed up the hill to the Holiday Inn where their families were staying and settled into watch the tape-delayed broadcast. (The network had decided not to air the 5 p.m. ET game live.)

“We actually pinched ourselves because we won again,” Johnson said. “We didn’t know if we were dreaming the first time around.”

They weren’t, but after a sleepless night, their coach made sure they were awake with a spirited practice the next morning. The U.S. would face Finland for the gold, but due to the archaic Olympic points system, a loss in the final could've sent the Americans home without a medal of any kind. 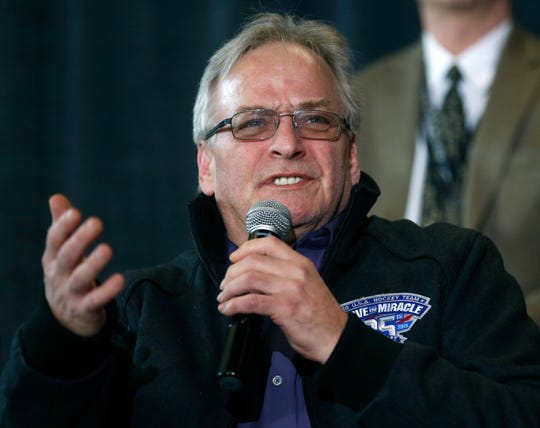 “If we would’ve lost, there would be no stories now — nothing — and that would’ve been sad,” said defenseman Mike Ramsey, the youngest player on the team who’d go on to play more than 1,000 NHL games before retiring with the Detroit Red Wings in 1997. “Believe me, we thought about it — for two days we thought about it.”

And after the U.S. team got off to another shaky start, trailing Finland, 2-1, after 40 minutes, Brooks made sure they still were thinking about it.

“Herb came into the locker room between the second and third period and said one thing twice,” Johnson said. “So it hit home real quickly: ‘If you lose this game, you’re gonna take it to your (expletive) graves.’”

Brooks took a couple steps toward the door, turned and repeated the last three words, and then walked out of the room. The players followed soon after, then skated their best period of the tournament to complete another comeback win — the U.S. outscored opponents 16-3 in the third period in Lake Placid — and secure the gold. Michaels again counted down the final seconds, bellowing at the end, “This impossible dream comes true!”

Forty years later, the dream lives on, the players forever linked by what they accomplished. But while there have been several reunions in the past, “this one’s been much more reflective, looking back and thinking about things,” Morrow admits.

The team lost Brooks to a car accident in 2003. Bob Suter died of a heart attack in 2014. Mark Pavelich, who assisted on the winner against the Soviets, is currently in a treatment facility after being found mentally incompetent to stand trial on felony assault charges last year. (His family fears he’s suffering from CTE.)

Others have dealt with their share of hardships over years, too, including Morrow’s friend and former college roommate at Bowling Green, Mark Wells, a St. Clair Shores native who was the last man to make the final roster in 1980. Wells, 62, has battled serious health problems stemming from a degenerative spinal disease and a decade ago was forced to sell his Olympic gold medal for $40,000 to help cover medical expenses.

“Forty years have passed and life has taken its toll for a lot of guys,” Morrow said.

But that said, some things remain frozen in time. A hit Disney film in 2004 reintroduced the story to a generation that wasn’t alive to experience it the first time around. A few months ago, Michaels found himself watching his 13-year-old grandson win a youth hockey tournament ... in Lake Placid, of all places. And now as these “Miracle” workers gather once more, they know theirs is a story that’ll live forever.

“I think my teammates and I are just taking great pride in knowing that we’ve kind of set a standard for ... I hate to say it this way, but you believe in miracles, you believe in working hard, you believe in sacrifice, and anything can happen,” said Eruzione, 65, a motivational speaker who recently published an autobiography titled, “The Making of a Miracle.”

“I can’t tell you how many teams I’ve talked to and schools I’ve visited and coaches that have called me before the big game, (asking,) ‘Can you say something to my team?’ I just think it’s something they can look at and can think that, ‘If they did it, I can do it.’ ... And I think that’s what makes America so great, stories like ours.”