Niyo: Running back is still position of need for Lions

If you’re doing the math, it’s not hard to come up with a scenario where the Lions decide to add another running back in April’s NFL draft.

Niyo: Running back is still position of need for Lions

And if you’re doing the math, it’s not hard to come up with a scenario where the Lions decide to add another running back in April’s NFL draft.

Not with their first-round pick, which seems earmarked for one of the defensive stars in this year’s class. Maybe not on Day 2, either, given all the other needs on Detroit’s roster. 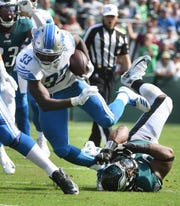 Kerryon Johnson was one of eight running backs who played for the Lions last year. (Photo: Daniel Mears, Detroit News)

But unless the Lions decide to address their backfield in free agency — keep an eye on Dion Lewis if he becomes a salary-cap casualty in Tennessee — don’t be surprised if general manager Bob Quinn ends up drafting a running back for the third consecutive season.

That’s because eight different running backs carried the ball for the Lions last season, and a half-dozen of them actually started a game. You’ve likely forgotten some of their names — where have you gone, Paul Perkins? — but the Lions probably can’t afford to do the same as they reevaluate their backfield this winter.

Starter Kerryon Johnson has been placed on injured reserve in each of his first two seasons, missing 14 games in all. And after an impressive rookie debut that saw him average 5.4 yards per carry while also flashing his receiving ability (32 catches in 10 games), Johnson’s production fell off when he was on the field last season.

The Lions did find some complementary help, adding a third-down back in J.D. McKissic, who had a history with offensive coordinator Darrell Bevell, and eventually turning to Bo Scarborough, a second-year pro out of Alabama, as the lead back in late November.

Besides McKissic, who is a pending free agent, the only other back to appear in all 16 games last season was rookie Ty Johnson, who played less than 30 percent of the team’s offensive snaps. Tra Carson, a late-season waiver claim, and Wes Hills, a practice-squad call-up, are the other running backs still on the roster.

Even though the Lions averaged 4.1 yards per carry last season — good for 21st in the NFL — it wasn’t nearly enough for a team that’s determined to establish a ground game and lean heavily on a play-action passing attack. Only two teams — the Jets and Jaguars — scored fewer rushing touchdowns than the Lions’ seven last season, too, if you’re keeping score.

Losing Matthew Stafford to injury at midseason had something to do with that, as did the inconsistent play of an offensive line that’ll get another offseason makeover through free agency and the draft.

Depth in the draft

Yet given the running back depth in this draft — Quinn made note of that Tuesday during his podium session at the combine — it’s not hard to see them dipping into it at some point.

Again, probably not for one of the top-tier talents like Georgia’s D’Andre Swift, Ohio State’s J.K. Dobbins, LSU’s Clyde Edwards-Helaire or Wisconsin’s Jonathan Taylor, though it’d be a debate worth having if one of those backs was sitting there at the top of the Lions’ draft board on Day 2.

Ask Wisconsin’s Tyler Biadasz, one of the top interior linemen in this draft, about Taylor and his eyes light up.

The Lions, like most teams, could use a guy like that. Dobbins, too, has the kind of game-breaking ability NFL teams covet, and the Edwards-Helaire’s versatility as a pass-catcher makes him arguably the most intriguing prospect of the bunch.

But the list keeps going, and the prospects come in all shapes and sizes. There’s some sizzlers, like Western Michigan’s LeVante Bellamy, who led the NCAA with 23 touchdowns last season and is hoping to clock under 4.3 seconds in the 40-yard dash here in Indianapolis. Then there’s an entirely different kind of animal like Boston College’s AJ Dillon, a workhorse back who checked in at just under 6-foot-1 and 247 pounds this week. 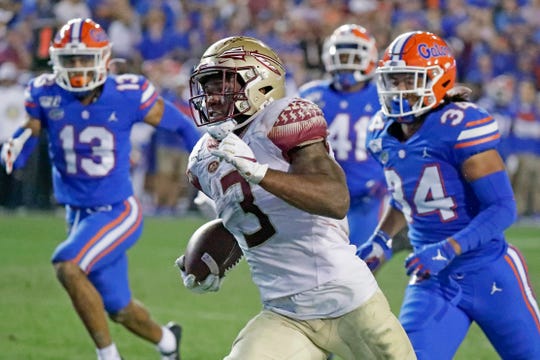 Florida State’s Cam Akers is another intriguing option. As NFL Network draft analyst Daniel Jeremiah put it last week, “If you told me four years from now that Cam Akers ended up being the first- or second-best back in this draft, I would not be surprised at all.”

Pro Football Focus actually ranks Utah’s Zack Moss as its No. 1 back, and he’s another player that should interest the Lions if his medicals check out here in Indianapolis.

Moss bypassed the draft after a knee injury cut short his junior season, then helped himself — and the Utes — by rushing for more than 1,400 yards and 15 touchdowns as a senior. As a player who patterns his game after Marshawn Lynch and loves to run inside-zone plays, it’s not hard to envision him in Bevell’s offense. His punishing style fits the blueprint head coach Matt Patricia has laid out as well.

“I’ve heard people say, just by looking at me, they want to get into a cold tub,” Moss said, adding that he tries to send a message with the way he finishes his runs. “Over my career, I’ve seen guys make a lot of business decisions.”

At some point, Quinn and Patricia might have to make one, too, as they make their way through this draft. Because among the many issues last season’s losing highlighted was this one: When you can’t run, it’s hard to hide it.