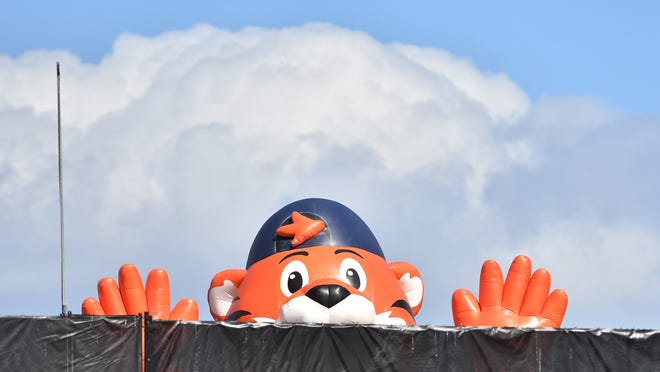 West Palm Beach, Fla. — Much less interesting is the players’ parking lot at TigerTown now that Justin Verlander has taken his arm, and his exquisite automobiles, to a new team and spring-training complex.

He works now for the Astros. The endless stream of Maseratis and Lamborghinis and whatever elite vehicle Verlander happened to be driving to the Tigers’ spring-training locale in years past have vanished from Lakeland and central Florida. He wheels these days into the Astros players’ lot, on a majestic new baseball tract the Astros share with the Nationals a few miles from the Atlantic Ocean’s surf.

This baseball expanse that has a Gardens of Versailles look and feel to it is quite the venue.

But of course, Verlander is quite the extraordinary pitcher. On quite the accomplished Astros team only four months removed from its World Series parade

Verlander says he is comfortable. He has adjusted.

“Fantastic,” he said Thursday, minutes after wrapping up a workout and still wearing shorts, an Astros T-shirt, and an Astros cap spun backwards. “It’s a good group of guys. I think I’ve gotten a lot better these past years in communicating with younger guys. I did it in Detroit, and there’s a lot of that culture here.”

He spent the past 13 spring trainings in Lakeland with the Tigers but has shifted his life, competitively and personally, to corridors more tied to Houston and away from Detroit.

To a point, anyway. Talk with him for long minutes in front of his dark-wood locker tucked within the Astros clubhouse and any notion that he and Detroit will ever be wholly separated turns to ash.

It comes back to last autumn. To what he came to understand about Detroit and Tigers Nation during September and October as Verlander, who all along was viewed as the single piece the Astros were missing, became just that, a pitcher who helped commandeer Houston’s high-drama playoff push and seven-game World Series toppling of the Dodgers.

He knew the folks back home were pulling for him. And for his team.

And it about melted him.

“That was really cool,” he said Thursday, with a kind of sigh, almost as if the reality is still settling in. “I’ve still got my ear to the ground in Detroit, and to have had them embrace this (Astros) team because of me was amazing.

“You don’t see that a lot in sports. It’s something very unusual. But I didn’t want to leave a city in the fashion some athletes do.

He was so wired to the Tigers and to Detroit that he initially said no to an Aug. 31 ticking-minutes deadline deal Tigers general manager Al Avila had cooked up with Astros GM Jeff Luhnow. Verlander owned a no-trade veto if he cared to exercise it. And in those first moments after he learned a deal had been agreed to, he was having no part of a move to Houston.

As much as he lived for pitching in the postseason, as much as he ached to win a World Series, he was too wedded to Detroit.

Or so he said at first blush. A few minutes of reflection followed like earthquake aftershocks. Competing thoughts began to flow. The Astros were stunningly talented. They lacked a rotation horse, a Verlander, which is why they were offering the Tigers a rather incredible proposition: three prized prospects, as well as acceptance of $40 million from the $56 million guaranteed Verlander this year and in 2019.

“In the end, the chance to win, when it was to the benefit of both teams, made the difference,” he said Thursday. “And it was a win — for both sides.”

It’s true he would have offered a faster yes had the Dodgers or Cubs been hunting him ahead of the Aug. 31 witching hour. Los Angeles would have been right for the woman who is his wife and who then was his fiancée, Kate Upton, and her career. Chicago would have been advantageous to each for assorted reasons.

But the competitor in him was at work during a single hour that changed baseball history in Houston, in Detroit, and in a game’s archives.

“Reinvigorating,” he said Thursday about the trade and what he came to understand, quickly, about his and his new team’s mission, which was to win a championship he and the Tigers had so many times missed. “It’s what I worked hard for, it’s what I relished, that opportunity to win.”

Not many hours after he and the Astros sprayed champagne across half of Texas he was on a jet bound for Italy. There was another celebration scheduled. A marriage.

He says matrimony has been “awesome” and that his relationship with Upton transcends vows or bonds a wedding traditionally blesses.

“We’re best friends,” he said Thursday. “And we would be even if we weren’t married. Marriage doesn’t change anything there.”

He broke into a half-grin.

“I’m grown up now,” he said, a reference to Tuesday’s birthday, his 35th, and to how perspective arrives for a man as he slips into middle age.

He was asked Thursday about fulfillment that came by way of a World Series ring. Had it become the missing piece in his professional life, offering a sense of completion he might never have known in Detroit?

“I never viewed it as a void,” he said. “It was a missed opportunity. If I’d have ended my career without a championship, that wouldn’t have been primary. But I had let myself think it wouldn’t happen, and now that it has, there’s fulfillment in that respect.”

He is back at work, connecting each day more deeply with his not-so-new team and with Houston’s baseball culture.

Steadily, he is moving away from Detroit, and from Lakeland, where his home there is on the market.

What he can’t sidestep are those thrilling, formative baseball years in Detroit. The friendships. The fun. The life it helped deliver in 2018.

“You can’t get a bond like that in sports,” he said. “Not very often. Not today.”