Henning: Victor Martinez seeks to re-prove himself on, off field 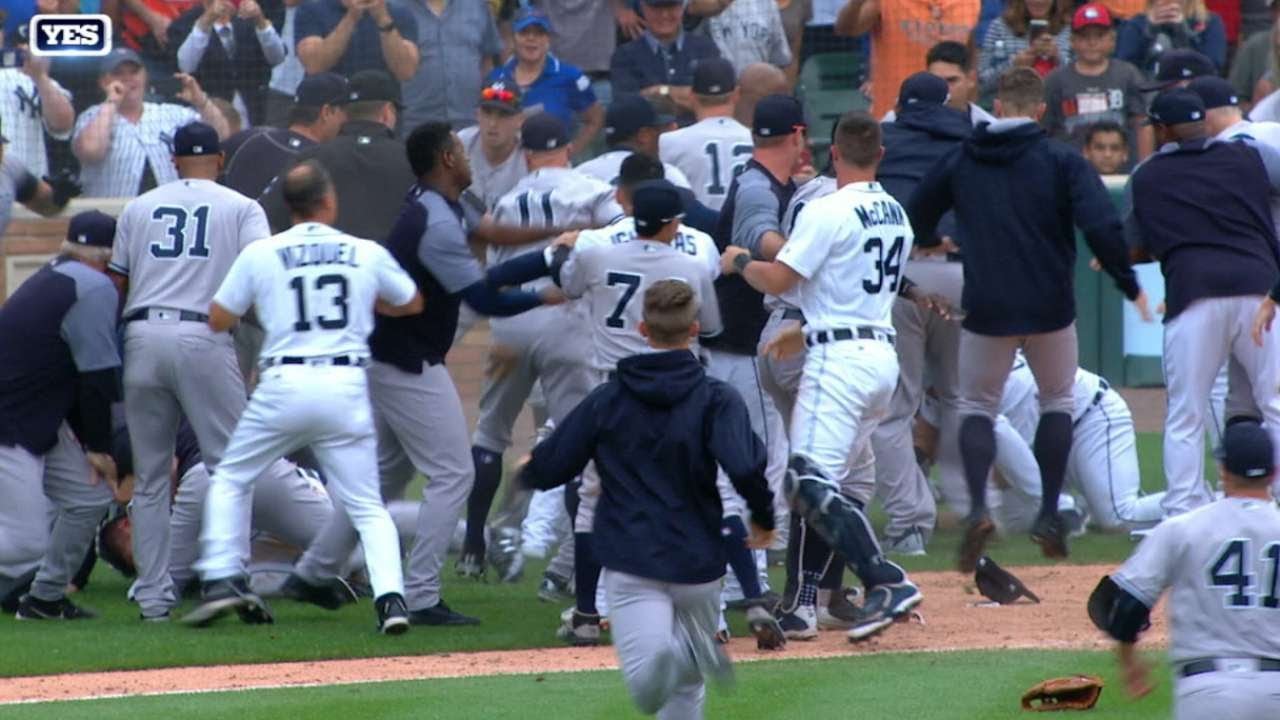 Lakeland, Fla.— Based on last year’s miserable numbers, and based on a 39th birthday in December, it was never a sure thing Victor Martinez would wear Tigers threads in 2018.

Yes, they owed him $18 million for another season as their designated hitter. But the money was going to be paid either way. Better, perhaps, to write him a farewell check and think about a younger, more energized bat at DH.

Martinez instead turned salesman during conversations with Tigers general manager Al Avila. He said he was into a workout regimen worthy of a Marine Corps grunt. He had no lingering heart issues of the kind that crimped his 2017 ordeal. His hair might have taken a noticeable turn toward gray during the past six months. But this is a man who loves playing baseball, who lives for hitting, and there was no peace in stepping away from the big leagues simply because he was 39 and coming off that 2017 mini-disaster (.255, .697 OPS, 10 home runs).

In a game Monday against the Washington Nationals at Marchant Stadium’s Publix Field, Martinez three times came to home plate and, after an early pop-up to third, twice ripped the baseball: single to left, and a double that was going to be his fifth home run of the spring until a vicious quartering wind dropped it onto the warning track in left-center. It bounced over the fence for a ground-rule double.

“I think of the players I came up with, and maybe only two are still playing,” Martinez said after he, and the rest of Monday’s starters, had given way to the usual cast of kids who funnel into late-innings Grapefruit League lineups.

Martinez was pulling lampblack strips from beneath each eye as he sat in front of his locker, pondering this reality known as age. For athletes, it arrives all too early. Consequences are extreme. They end careers that only a summer or two earlier seemed perpetual.

“Just a very few things change,” Martinez said, speaking of physical facts. “What I can tell you is that as the years go by, it takes longer and longer to get ready.”

Look at his Grapefruit League numbers and Martinez’s camp would look like something from a switch-hitter’s prime: .281 batting average, and a heavy 1.011 OPS.

Can it last? Past the Grapefruit League’s silly season, when pitchers are a menagerie of veterans working out kinks and kids headed for the bushes?

“I’m just seeing the ball good and putting a good swing on it,” said Martinez, repeating a line that might as well be granted status as The Official Response From Hot-Hitting Big-Leaguers.

So, this is gratifying, doubly so, for a man who a few months ago seemed a prayer novena or two from being invited back. As a player, anyway.

“Yeah, a lot,” Martinez said. “A lot. I really thank God for letting me get to this point.”

Getting to this point was doubly dicey for the simple reason it wasn’t only his offense that took a tumble last season. So did his clubhouse reputation, mostly due to a bad Tigers-Yankees beanbrawl, Aug. 24, at Comerica Park, when eight players, coaches, and managers were tossed in what wasn’t so much a baseball game as it was a three-round heavyweight fight. It cost various Yankees and Tigers 18 games in suspensions.

Martinez’s mistake — he says it was more a matter of mis-identification — came when, after the afternoon’s first fracas, he was accused by teammates of being overly diplomatic with Yankees catcher Gary Sanchez. It was Sanchez who had been hit by a Michael Fulmer pitch, in his next at-bat after Sanchez had clubbed a home run, that put in motion an afternoon of mayhem on a summer Thursday in Detroit.

Sanchez was seen slamming fists into Miguel Cabrera during a scrum that began when Cabrera shoved Yankees catcher Austin Romine after a message-pitch had been thrown behind Cabrera.

The greatest damage from an extraordinary donnybrook at Comerica Park might have been to Martinez — to his Tigers relationships.

In the dugout, after the initial blow-up, he was confronted by Justin Verlander, who was a week from being traded, and by Nick Castellanos, neither of whom was pleased that Martinez seemed to be overly civil with Sanchez as players stood on the field, waiting for tempers to ease and for umpires to sort out the banishments.

There was yelling in the dugout, angry words and a near-fight between the three Tigers. Martinez was viewed by Verlander, Castellanos and, apparently by others, as having been somewhere in the general realm of a traitor for having been too cozy with Sanchez.

Martinez says everybody got everything wrong, beginning with him.

He knew Sanchez, he explained Monday. He knew him as a good player and as a good man. But he did not know, he insists, that Sanchez had punched Cabrera.

“I’m telling this for the first time,” he said, “but I came into the clubhouse during the game and Miggy (Cabrera had been ejected) told me: ‘Gary Sanchez hit me while I was on the ground.’

“And I couldn’t believe it. I said, ‘Are you serious?’ He said, ‘Yeah, I’m serious.’ And we went into the video room and saw the video.”

There was the punch. Two punches, to be precise. And they had been flung by Sanchez, clearly, in the Tigers’ view. And now in Martinez’s.

It wasn’t going to be a polite conversation, Martinez vowed.

What he didn’t know is the Martinez-Sanchez summit was an inning away. Dellin Betances later hit Tigers catcher James McCann in the helmet with a near-100-mph fastball. There was more rioting. More ejections. More tension as umpires began clearing another crash scene.

“I approached him,” Martinez recalled. “I went to Sanchez and said: ‘Sanchez, what are you doing hitting Miggy?’

“I’m going to give him the benefit of the doubt,” he said. “I told him right then: ‘Next time you see Miggy, you have to apologize.’”

Martinez says what infuriates him about the August incident is that it was perceived as Exhibit A in how he had supposedly become a clubhouse toxin.

He says 2017 was no different in terms of his disposition to teammates or to the game than any of his previous big-league years. The man who supposedly was a clubhouse shaman in his earlier big-league life now was a pariah?

“Go around any of the teams I played for,” Martinez said. “My years with Cleveland. With Boston. My eight years here. People will tell you who I am. Now you want to say I’m a bad teammate?

He says that whatever ugliness lingered after the brawl has since been purged. Explanations helped. Conversations helped. Misunderstandings were bared. Forgiveness was granted.

“Did you ever get in a fight with your brother?” he asked.

“Look at it this way: We spend half our year together. Things happen. But that doesn’t make you a bad teammate.”

The scene within this 2018 Tigers clubhouse has, in fact, been one of peace, in the fashion of most spring camps. Real games haven’t yet begun. Stress levels are minimal.

A man heading into the final year of his Tigers contract is hoping to finish as a professional — as a hitter, and as a player whose reputation means more than batting averages or hot Grapefruit League starts.

“I’m happy to be part of this rebuild,” he said of the Tigers’ roster reconstruction, which will include, at year’s end, a likely goodbye. “I went through a rebuild in Cleveland.

“We’re young. But this is baseball. You never know.”

A player never knows what win-loss record awaits. All he has under personal control is his performance. And his name. And his insistence that, more than a good hitter or pitcher, he wishes forever to be known as a good teammate. Martinez says there will be no doubt about either designation during what is almost sure to be a final year in Detroit, and perhaps the final of 16 big-league seasons he hopes will be seen as lustrous, as honorable — by all who appraise a big-leaguer’s life, beginning with the men with whom he played.