Henning: Cabrera’s return to form comes with case of crankiness

Henning: Cabrera’s return to form comes with case of crankiness

Bob Wojnowski and Chris McCosky discuss the improving Tigers, the 9-11 start and what to expect from key players in the coming weeks.

Baltimore — Considering his heavy-hitting spring, it was time to talk with Miguel Cabrera about a 2018 season that looks as if it will fit neatly into all the other lustrous baseball years from a superstar’s scrapbook.

There is his .326 batting average and .413 on-base percentage. His OPS, which is a product of Cabrera’s on-base numbers as well as a bat that has hammered three homers as it shows some of its old voltage, is .942, almost dead-square with his career OPS of .948.

And because he has been playing regularly with his usual wizardry at first base – that is until a left-biceps spasm acted up Sunday, and a potentially disabling hamstring issue hit him during Thursday’s loss to the Royals – there was also an urge to talk about baseball, about the Tigers, and about life with a Hall of Fame-ticketed player who is in his 11th season with Detroit and who two weeks ago turned 35.

Cabrera said he was fine, also, with an interview as arrangements were made to chat last Friday, in the Tigers dugout, four hours before the Tigers and Orioles dueled at Camden Yards.

But as he sank onto a cushioned bench, it suddenly was not OK to reflect on any subject: his noticeable joy and vigor this spring, his fine start, his evident health (before the biceps issue), his new manager and new teammates, his status as a lifelong Tigers star made permanent by a generous contract from late Tigers owner Mike Ilitch. None of it met with Cabrera’s conversational interest.

They instead were questions to be contested, fought, resisted, during an interview that lasted nearly nine minutes and was more diversion than discussion.

Even an opening remark about Cabrera’s clear boost in banter and humor with teammates, which on an elevated level has been part of the Tigers’ clubhouse culture since spring camp in Florida, was nothing Cabrera cared to acknowledge.

“What’s the reason for this?” he asked, his first tussle with any question that came his way.

Because, it was explained, it seemed to reflect the fact he was feeling good, in all ways, a season after herniated disks were given as the source for a spectacularly poor year by Cabrera standards: .249 batting average, 16 home runs, .728 OPS. Those herniated disks, diagnosed by doctors and explained publicly as Cabrera’s season-long affliction in 2017, led to a heavy off-season rehabilitation program the Tigers have confirmed.

“How so?” he asked when the subject of last year’s pain and falloff was raised.

“Herniated disks,” he was told. “That’s what doctors called it.”

Because, it was explained, he is Miguel Cabrera, a person who holds deep interest for those who follow baseball in Detroit and who invest attention on that team’s players, particularly its top star.

And because, it was said again, his spirits seemed so uncommonly bright in 2018, all as he just turned 35 and was putting together such solid numbers. Again.

That everything, baseball-wise, in a man’s life at an age that’s always a milestone for any person, whether an athlete or otherwise, seemed to be gratifying. 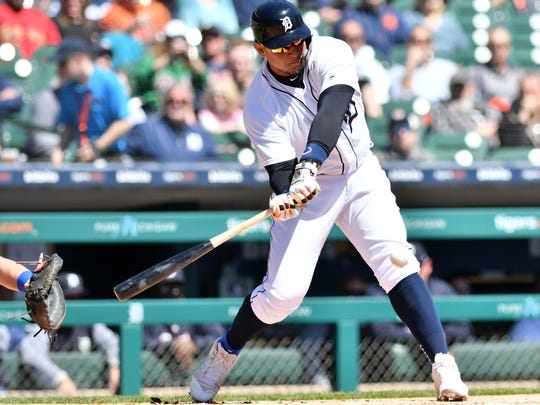 Was that a correct or incorrect thought?

“I come in here every day to play baseball,” he said. “What’s your point? I don’t understand your point?”

No point. But views a player of extreme celebrity might have on his performance and on his general baseball outlook would be welcomed, given that he’s possibly one of the best five hitters to ever have played the game and is under contract in Detroit through at least 2023.

Then he wasn’t playing hurt last season, even when his bosses and trainers confirmed it? Even when they assured everyone that Cabrera, with a full off-season rehab program, could subdue those herniated disks, minus surgery, and have a 2018 season as strong as the one he so far is bolting together?

“Everybody has ideas,” he said of his 2017 tumble. “No excuse. They said I had a bad year because of my back?

“I just had a bad year,” he insisted.

Was he not now feeling better? The Tigers agree he is, although manager Ron Gardenhire says he and Cabrera talk regularly about Cabrera’s physical state. Playing first base last season, all parties then said, was particularly tough on those bad disks, whether Cabrera cares now to remember or not.

“I feel good,” Cabrera said of his body and mind in 2018 – before Sunday’s biceps and Thursday’s hamstring ills surfaced. “I always feel good.”

Cabrera loosely was referring to multiple seasons: 2013, when he won the American League MVP award even as he dealt with serious late-season groin issues that led to surgery for a sports hernia; and in 2014, when he played on damaged ankles that involved a stress fracture and bone spurs for which he also had autumn surgery.

“What doctors said, doctors said, I don’t care,” Cabrera answered. “So why (should he) say anything? Ask me some questions. I don’t want to waste time. I’ve got things to do.”

In fact, there had been initial questions about himself and the Tigers that Cabrera brushed away.

Cabrera had been through past seasons with the Tigers when playoffs and maybe a World Series were non-fictional thoughts. This is different and a team has acknowledged throughout that a rebuilding stage is here, which doesn’t change the on-field mission: to win.

How was Cabrera adjusting to a new set of roster realities?

“My focus is to come in here every day,” he said. “Trust the process. When I come in here, I get ready to play a baseball game. I’m trying to do my job. That’s the bottom line.”

How did it feel to see so many “kids” come aboard?

What did he see in new third baseman Jeimer Candelario, who has brought skill and energy to Gardenhire’s lineup at Cabrera’s old position, third base?

“A lot of potential,” Cabrera answered.

“A lot of potential.”

He added that JaCoby Jones, too, had “a lot of potential,” but in none of the cases was Cabrera inclined to talk about specifics in talents or personal traits.

It is known Cabrera last season was not a great fan of Tigers manager Brad Ausmus. What were his thoughts about the new manager, Gardenhire, whom he knew from afar during Gardenhire’s years with the Twins?

Anything about his style?

“Different,” the Tigers star said. “He enjoys the game. That’s it.”

Cabrera four years ago signed a contract worth $292 million should two vesting-option seasons be triggered. He now makes $30 million per season, which rises to $32 million in 2022 and 2023, the year he turns 40. Only if he gets top-10 MVP votes in 2023 and 2024 would the contract extend two more seasons, with $30 million to be paid each year.

Ilitch lavished Cabrera, it is understood, for two reasons:

He wished to offer something of a thank-you card to a hitter who had helped transform baseball in Detroit from the day Cabrera joined the Tigers in a historic, December 2007 trade with the Marlins.

It was, for Ilitch, worthwhile to commit to a contract so generous as to be outlandish, even when compared with baseball’s most elite contracts.

Cabrera was asked if he had felt that affection, that sense of legacy Ilitch wished to build into his career-long paydays from the Tigers?

“Yeah, that’s why he signed me,” Cabrera answered. “That’s why I signed it.”

There would be no more answers, no elongated thoughts, no interest in continuing a conversation that was extraordinary among past Tigers players, and even for Cabrera, for its opposition to questions or premises. Cabrera can be introspective. He can be conversational.

Or he can shut it down.

“This is wasting my time,” he said, shaking hands and twice saying thank you for whatever had just transpired as he walked from the dugout to the Tigers clubhouse.

There had been no chance to talk about a matter he knew was obliged to be raised, based on preliminary discussions: Thoughts on his legal status with respect to a mistress from Orlando, Fla., suing him for additional child support.

Cabrera was to be asked two questions, and two questions only, pertaining to the issue: Was he satisfied with how the case was proceeding? And did he have any regrets about actions that led to a legal matter so public?

But there was no chance to broach such a subject, or others.

The man was in no mood to talk. He would spend nearly nine minutes making that abundantly clear.