With a glutted trade mart, Tigers missed on deals most summers would have delivered. But other opportunities loom, beginning in August.

The Tigers looked to make other deals, but GM Al Avila said the market was flooded with other players, making a trade difficult. The Detroit News 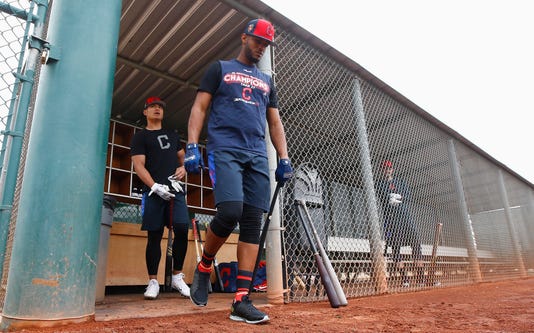 Detroit — Al Avila was on four hours of sleep when the Tigers general manager popped into Detroit’s dugout late Tuesday afternoon. He had been cajoled into meeting with a media battalion that wanted debriefings on July’s trade season, which a half-hour earlier had passed with the Tigers making a lone move.

This had not been the dream deal a team from Detroit and its trade-famished fans had preferred. The Tigers got from the always-loaded Indians a switch-hitting shortstop prospect, Willi Castro, who joins contestants hoping for eventual long-term work and happiness at Comerica Park. Detroit’s cost was Leonys Martin and farm pitcher Kyle Dowdy, which, Avila insisted several times, made for “a good day for the Detroit Tigers.”

For a reconstructing big-league team, Tuesday’s deal was not Tuesday’s, or today’s, over-arching issue. The deeper question is if an overall rebuild that in a few years delivers genuine playoff-grade teams is feasible.

This is going to take time.

The Tigers made one trade ahead of Tuesday's non-waiver deadline, sending CF Leonys Martin to the Indians for SS prospect Willi Castro. The Detroit News

The Tigers had hoped for a few more buyers and a few less sellers as July’s cutoff neared for deals not requiring waivers. They instead saw what everyone else in baseball began seeing as early as April. Baseball’s trade mart was going to look like a Main Street where every other store had hanging from its windows “Going Out of Business” signs

The market was flooded.

More: Tigers to play with Fiers after trade deadline

More: It's still TBD if Tigers' Alan Trammell, Jack Morris will get statues at Comerica

“Record number,” Avila confirmed Tuesday, speaking of all the quality players baseball’s buyers could snatch at prices generally below retail.

This left the Tigers saddled with market-ready pitchers and position bodies that in plenty of past summers would have been part of swaps benefitting all parties. Mike Fiers, Francisco Liriano, Jose Iglesias, Nick Castellanos, Blaine Hardy, Shane Greene — Michael Fulmer, had he not been on the disabled list — all would at least have been discussed, probably seriously, had a typical July trade season evolved.

This puts a bit more pressure on Avila and the Tigers as they look at roster blueprints and timetables.

More work to do

They need to make more trades, preferably parlaying some of their better existing talent — Michael Fulmer is the prime guy here — for multiple prospects who can join with their own draft picks and young pick-ups to restock a lineup, rotation and bullpen that in a few years can begin to mature as regular contenders.

You can supplement with celebrity free-agent talent as that process deepens. But until that time, it’s up to the Tigers to draft at full-throttle, to have their Latin American signings begin to deliver an All-Star or two, and, at the same time to add blue-chippers via trade.

A single deal in July isn’t a mortal setback. It could help, maybe significantly if Castro, whom the Tigers have been eyeing for a year or more, develops into an everyday guy.

Nor does it cancel Detroit’s summer shot at adding a prodigy or two. Fiers, above all, ranks as a pitcher who could be dealt in August when trades can be made if a player has cleared waivers or has been claimed from the waiver wire by a team and a swap is transacted.

It’s a bit more complicated, but it happens, as the Tigers showed last August when with a few hours to go they shipped out Justin Upton and Justin Verlander.

The Tigers might also find the off-season landscape more inviting than were July’s shopping aisles. This could particularly be true if Fulmer snaps back from the disabled list and pitches in September with his customary aplomb.

The same case could be made for next July when a more traditional July market might emerge that differs from this summer’s flesh-forfeiture.

Fulmer, of course, like Castellanos, is a player lots of fans would just as soon keep in Detroit. They argue that these are the very guys the Tigers should "build around” as they re-seed their roster.

It’s an understandable thought. What it misses is that by the time this team has reloaded with players who can broadly complement those two, they will have aged considerably and required expensive extensions to stick in Detroit.

It doesn’t mesh with the Tigers’ more practical needs. While it’s going to be tougher for them to deal Castellanos for anything meaningful when he is 15 months from free agency, a bounce-back by Fulmer still stands as their best shot at owning a trade chip that can fetch a couple of essential pieces. With starting pitching the farm system’s backbone in 2018, that’s a trade the Tigers would consider more of a mandate.

“You can’t force the issue,” he said. “If something works and makes sense, we’ll move.”

August will be key

The next 30 days matter.

Fiers has been throwing so well, spanning so many starts this season, he could in coming weeks be viewed as Grade-A beef for a rotation hunting a back-end starter for September-October.

Avila knows realities here. He had a couple of customers, Oakland and Milwaukee, browsing as Fiers was sale-displayed in July.

What the Tigers do know is this. They need a lot of young personnel, as rapidly as it can be amassed. You can do it by way of drafts and signings. But somewhere within the machinations, a big trade is vital.