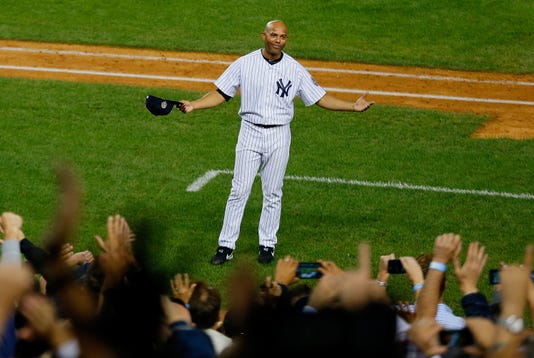 Mariano Rivera, the former Yankees closer, is a shoo-in to earn election into the Baseball Hall of Fame as a first-ballot honoree.(Photo: Mike Stobe, Getty Images)

Next to an IRS refund check, one of the mailbox’s annual delights is picking through mailers and early Christmas cards and finding tucked within the stash a Baseball Hall of Fame ballot. This year marks a 30th time voting, and eight names make the personal cut. In alphabetical order:

There are three new names compared with last year’s ballot. Two of them, Halladay and Rivera, are new to the candidates’ parade, while a third, Walker, has been judged after years of contemplation and conversation to be Hall-worthy.

A mea culpa could be issued for having waited so long on Walker, but, in fact, I’m not sorry, because, like some people’s decision to marry, time often is your ally. This was the year to say to Walker: I do.

We can begin with the winners, personally submitted.

The annual cut-and-paste explanation for Bonds and Clemens is that, you bet, they dabbled, and they got help from those gremlins known as performance-enhancers. The annual cut-and-paste follow-up is this: They would have had Hall-of-Fame numbers had they not been naughty. Bonds was a fury and a force and he never for a moment needed help. Shame on him. But he belongs in Cooperstown. 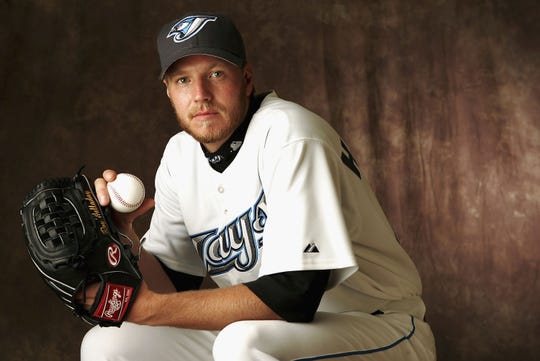 Roy Halladay was a model of consistency during his years with the Blue Jays and Phillies. (Photo: Andy Lyons, Getty Images)

Halladay, who tragically died a year ago in a plane crash, has a career WAR of 64.6, and an adjusted WAR of 57.6 on the indispensable scale known as JAWS, conceived by FanGraphs guru Jay Jaffe, and detailed in his essential book, "The Cooperstown Casebook," which probably should be deemed by the new Congress to be required reading in all American classrooms.

Halladay won a Cy Young Award in each league and five times was in the top three among Cy Young votes. He also threw a post-season no-hitter, which doesn’t count for much, except for underscoring the fact this was one supremely good pitcher. Halladay goes to Cooperstown, maybe next July.

Never have understood the debate over Martinez, which in too many instances comes down to the fact he had bad knees and thus had to work most years as a designated hitter. Then again, as a hitter, he’s worth designating: .312 average during 18 seasons, a gaudy .418 on-base average, and a .515 slugging percentage, which translates to quite the OPS of .933. Martinez by now should have been in Cooperstown. This is his last crack at the writers’ ballot. In the name of justice, he needs to be elected.

The average WAR for a Hall of Fame starting pitcher is 73.4. Mussina's is 83. He pitched 18 seasons, had a 3.68 ERA, won 270 games for those interested in victories, had a lovely 1.19 WHIP, and nine times was among the top six in Cy Young votes. He also won seven Gold Gloves. Mr. Mussina, your plaque awaits, hopefully to be issued next summer.

The vogue conversation of late has been whether Rivera will win induction with a first-year unanimous vote. The answer would seem self-evident, since it has never happened. But Rivera will miss by precious little a perfect score. You can spend at least a day and a night listing this Yankees closer’s luminous numbers: 652 saves (baseball’s all-time best), his 19 seasons and 952 games, his 2.21 ERA, his 1.00 WHIP, his cutter that steadily turned bats into splinters. Cooperstown extends a warm welcome.

Not as compelling as some of the above, Schilling nonetheless belongs. He’s a few beats behind Mussina with 79.9 career WAR, but in terms of historical starting pitchers and Jaffe’s calibrations, he is 26th among all-time starting pitchers in WAR and 27th in the more refined JAWS analysis. He averaged 8.6 strikeouts per nine innings, which is third among all pitchers who have thrown 3,000 innings. Along with Sandy Koufax, Nolan Ryan and Randy Johnson, he is one of four pitchers in baseball’s modern times (expansion arrived in 1962) to have had four 300-strikeout seasons. Schilling has had too many moments doing Neanderthal impressions and won’t win a lot of votes as Egalitarian of the Year, but that’s incidental, at least here. He belongs in the Hall.

Admittedly, this took a while. And, admittedly, it probably shouldn’t have required so many years to see Walker as plaque-proper. But a voter who likes that getting into Cooperstown is more than tough took extra time pondering this extraordinary right-fielder. It feels good to check his name.

Walker was ruined during too many years by injuries and he was hurt by the perception (and reality) that Coors Field in Denver was doing him favors. But none of it diminishes his immensely gifted all-around game and that heavy WAR of 72.3, which compares more than favorably with the 59.3 accumulated by Vladimir Guerrero, who got his Cooperstown all-expenses-paid trip last July.

As for the group who missed, there were the usual close calls.

Just because you leave a player off an initial ballot doesn’t mean he’ll remain there. That’s the beauty of a 10-year candidacy, and I’m only sorry we don’t have the old 15-year window, which was eminently more just. Helton could yet get a vote here. But not this year. His numbers, particularly when Coors Field’s mischief was at work, remain on the edge. Helton’s career can benefit from a bit more marinading as his place in baseball history is assessed.

Tough, because he won 10 Gold Gloves, and, too, because his career OPS (.823) and career home runs (434) confirm this was more than an ungodly defender. But as with Helton, am tabling Jones for the time being, with that .254 career batting average something to overcome.

Again, a borderline entry. True, McGriff hit 493 homers. He had an .886 OPS during his 19 seasons. He made five All-Star teams. But he falls a half-gear shy.

No. The numbers are good. But factor in a long suspension for getting some help he didn’t need and Ramirez misses, as does Sosa, who got way too much help en route to his 600-plus homers.

Solid candidate. Not as gaudy as some players, but his defense was so exceptional, and his bat so strong when Rolen was healthy, he wins a seat in the waiting room. His is a career that merits constant dissection and consideration.

Former Tigers coach Omar Vizquel is on the Hall-of-Fame ballot for the first time this year. (Photo: Paul Sancya, AP)

Another let’s-think-about-it contestant here. You can debate Wagner’s Hall attributes and make a decent courtroom case either way for this closer and his 100-mph bullets. For now, he’s one to chew on as his numbers flirt with Cooperstown but fall a tad shy.

That’s the verdict on 2019's Hall-of-Fame crop. Eight made it. Eight who didn’t make it will find their way onto various other ballots. And no one will necessarily be wrong.

The Hall of Fame benefits from a deliberative voting bloc that takes its time, debates careers and how they’re measured against earlier luminaries, and tries — very hard — to get it right. Knowing, of course, there are legions of fans out there waiting to tell you why you were very wrong.