Bohn splashes to lead in Mexico

Bohn made a pair of birdies, and a pair of tough par saves that were just as valuable.

Bohn splashes to lead in Mexico 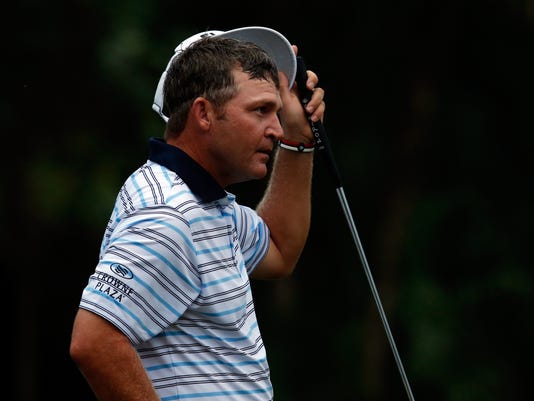 Jason Bohn reacts after putting out on the 18th green.(Photo: Justin Heiman/Getty Images)

Playa Del Carmen, Mexico — Jason Bohn looked out toward the ocean Saturday and knew it was going to be tough day at the OHL Classic. He kept it together long enough to take the lead.

Bohn made a pair of birdies, and a pair of tough par saves that were just as valuable, for a 4-under 67 in the rain and wind that gave him a one-shot lead over Shawn Stefani going into the final round of the last PGA Tour event of the calendar year.

"When we started, it was just a little bit breezy. It was nice. It was going to be a beautiful day," Bohn said. "Then we could kind of see the rain coming in from the ocean. Once it started raining, it got very difficult. The greens got a little bit slower just from the rain. If you were in the rough, you got some squirters where the ball could fly where there was water trapped between the grass and the ball. And it was just tough."

"I'm just soaked, right down to my boxer shorts," he said. "I am as soaked as can be right now."

Bohn was reminded on the final hole how tough it will be to capture his third career victory, and his first since New Orleans in 2010.

He stretched his lead to three shots as Stefani, Ken Duke and 36-hole leader Michael Putnam kept dropping shots. On the 18th hole at the El Camaleon course of Mayakoba, Bohn tugged his approach to the left side of the green.

Stefani, who made bogey from the bunker on the 16th and from a tee shot into the bushes on the 17th, made a 20-foot putt for one of only two birdies on the 18th hole in the final round. Bohn left his long birdie putt about 5 feet short and missed that for a bogey.

That put him at 15-under 198, and his three-shot lead suddenly was down to one shot.

Stefani is looking his first PGA Tour win. He lost to Justin Rose in a playoff at Congressional in July.

"I walked off the green on 17 and said, 'Just try to hit one in the fairway.' Hit a good shot in there and just tried to make birdie to end on a positive note," Stefani said. "Sixteen and 17 were just kind of mental errors, getting tired late in the day. You can't do that. It happened. But I stayed positive walking onto 18 tee box, and hit a couple good shots and knocked her in there."

Charley Hoffman (67) and Alex Cejka (68) were three shots behind, while the group at 11-under 202 included Jerry Kelly and Ken Duke, who hit a tee shot in the hazard on the 16th and made double bogey.

"Only time I hit it in the hazard all week," Duke said. "It's just tough to get out there with everything coming down. You're just soaked out there."

Fred Funk, 58, whose Champions Tour season is over, was five shots behind.

Oscar Fraustro of Mexico had a 69 and was in the group at 9-under 204, while Carlos Ortiz again held up under all the attention with a 69. He was seven shots behind. Ortiz won three times on the Web.com Tour a year ago and was voted its player of the year.

Bohn is coming off a runner-up finish last week in Mississippi and is 29-under par in his last seven rounds. He believes he has finally figured out that he doesn't have to smash it off the tee to compete as long as he's keeping the ball in play. He made a number of key putts for par to grab the 54-hole lead.

"I've always tried to do things with the golf ball that maybe I can't actually do," Bohn said. "I'm really comfortable in a place where I know my own game. I'm not a bomber, but I can keep it in front of me and I can hit some good, solid iron shots in there."

Christina Kim shot a 4-under 68 at Mexico City to increase her lead to five strokes in the Lorena Ochoa Invitational.

A stroke ahead after each of the first two rounds, Kim had a 14-under 202 total at Club de Golf Mexico. She won the last of her two LPGA Tour titles in 2005.

Kim matched China's Shanshan Feng for the best round of the day in calm, sunny conditions on the tree-lined course. The 30-year-old American birdied two of the first three holes, bogeyed No. 5 and pulled away with birdies on Nos. 10, 13 and 17.

Feng was second. She won the LPGA Malaysia last month.

South Korea's So Yeon Ryu, Spain's Azahara Munoz and Thailand's Pornanong Phatlum were 8 under. Ryu had a 69, and Munoz and Phatlum shot 71.

Ian Poulter squandered a six-shot lead at Belek, Turkey, to trail Wade Ormsby of Australia by one stroke ahead of the final round at the Turkish Airlines Open.

Ormsby eagled his ninth hole and finished with a third-round 68 for a 12-under 204 total on the Montgomerie Maxx Royal course.

Poulter shot 75, nine strokes more than his second-round 66 which he completed earlier Saturday in the storm-disrupted event. The Englishman started the third round six shots clear of five players, including Ormsby.