Maturing McIlroy not afraid to speak off the cuff

Maturing McIlroy not afraid to speak off the cuff 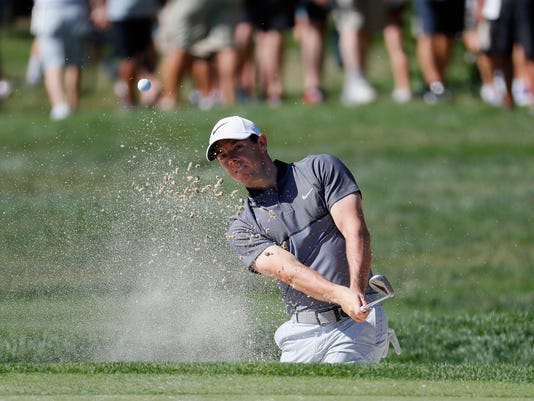 Rory McIlroy of Northern Ireland was fifth at the British Open and won the Irish Open in May.(Photo: Kevin C. Cox / Getty Images)

Springfield, N.J. — The transformation of Rory McIlroy has happened before our eyes.

When the Northern Irishman won the first of his four major championships in the 2011 U.S. Open, he was a round-faced lad with that mop of curly brown hair that spilled out of his cap. His pants were baggy and too long. His shirts were blowsy. His frame wasn’t soft, though it lacked definition.

Around the media, McIlroy was mostly lighthearted and extraordinarily open for a 22-year-old. Being a professional seemed like one wondrous moment after another for him.

The 27-year-old McIlroy, going for a third victory in the PGA Championship this week at Baltusrol Golf Club in New Jersey, seems grown up in every way. His face now features a chiseled jaw line, made more obvious because of his short-cropped hair. His tight shirts cling to his shoulders and biceps, making him look not like a golfer but an athlete.

McIlroy still smiles on occasion for gathered reporters, but not nearly as much. There’s a certain wariness now, and maybe a weariness too. He’s heard most of the questions before.

Yet McIlroy still has something to say. If anything, the man is far more interesting than the kid ever was.

That was clear two weeks ago before the British Open at Troon, Scotland. As Nick Faldo pointed out last week, the goal for most players is to bore the British tabloid press with pat answers and little insight. Fewer headlines that way. Faldo was the master at this. So was Tiger Woods.

It seemed as if McIlroy was begging to be a punching bag. He snubbed golf in the Olympics, exposed golf’s drug testing as weak, and resisted the contention that he and his fellow young players should be responsible for “growing the game.”

All in the span of 20 minutes. He sounded like a guy who needed to get a few things off his chest and wasn’t afraid to vent.

“I think he’s a breath of fresh air,” said Dottie Pepper, the former LPGA player who is working her first PGA as an on-course commentator and was never afraid to speak her mind. “He walks in there and tells it like it is — as he believes it, feels it.

“What we saw (at the British Open) was a player who had been poked and poked and poked. Is it fair to criticize him for what he says? I think you hold him accountable. But I think it’s wonderful that you have a guy in there whose not bound by what he’s supposed to say, or what he’s programmed to say.”

McIlroy has to listen to inane questions like the one posed at the British Open that suggested he was becoming like Ringo Starr of the Beatles next to Jason Day, Dustin Johnson and Jordan Spieth.

“First time I’ve ever been compared to the Beatles,” McIlroy responded dryly.

This might raise the hackles, considering McIlroy has won as many majors as the other three combined, and he’s the only one to have won money titles on both the PGA Tour and European Tour.

It’s not exactly as if he’s in some terrible slump. McIlroy captured the Irish Open in spectacular fashion in May for the 20th worldwide win of his pro career, and though he missed the cut in the U.S. Open, he tied for 10th in the Masters and fifth in the British Open.

He’s finished third once and fourth three times this season in the U.S., which says a lot about how things have gone. He’s been close, but hardly in the mix deep into Sundays.

“I definitely think one of the criticisms I have of myself this year is maybe not being aggressive enough and committing and trusting myself,” McIlroy said at Troon. “But I feel like the things I’ve been working with on my swing hopefully will get me to that point.”

McIlroy also admitted, “Sometimes if you’re not quite playing your best golf and you start to doubt yourself, it’s hard to hit the shots you need at the right time.”

The admission of vulnerability isn’t that common in pro golf, though several of the top players in the game, including Day and Spieth, are like McIlroy willing to expose fears or misgivings.

McIlroy just may be in a different place, engaged to be married but not the family man that Day is or the more carefree Spieth going on beach vacations with buddies.

He also seems to have put the game in perspective early in his career. McIlroy had to sit out last year’s British Open because of a broken ankle, and he said he went out on the Sunday of the tournament to work out. People were going about the business of life, oblivious to any golf tournament.

“When you’re here it seems like it’s everything to you,” he said. “But you look outside in the bigger, wider world, and it’s not the be-all, end-all. It’s obviously very important to me and important to a lot of people, but it just sort of put things into perspective for me a little bit.”

Though McIlroy didn’t win at Troon, all those headlines hardly seemed to dissuade him from speaking up.

“I’ve spent seven years trying to please everyone,” he said. “And I figured out that I can’t really do that, so I may as well be true to myself.”