Sunday’s roundup: Chun sets record at 21 under in Evian

In Gee Chun led from start to finish for a record-setting 21 under and four-shot victory at the Evian Championship.

Sunday’s roundup: Chun sets record at 21 under in Evian 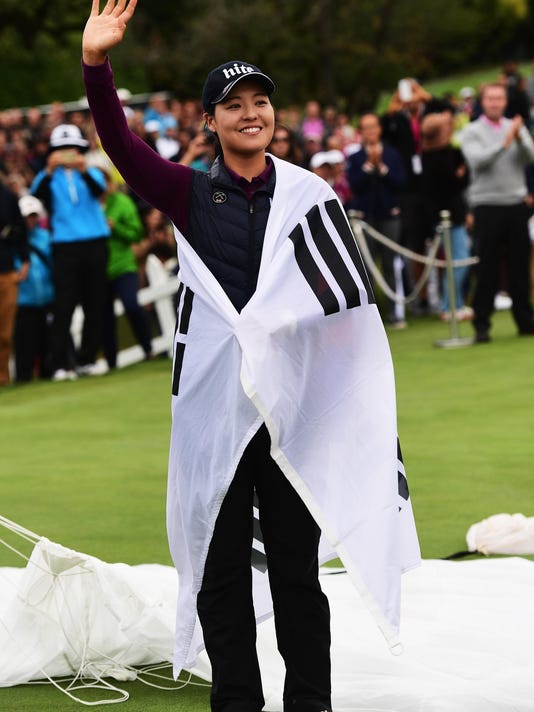 In Gee Chun waves after being given the Korean flag by a skydiver after the final round of The Evian Championship in Evian-les-Bains, France. She finished at 21 under, the lowest 72-hole score ever for a woman or man.(Photo: Stuart Franklin/Getty Images)

Evian-les-Bains, France — Walking toward the 18th green at the Evian Championship with one putt to make golfing history, In Gee Chun felt the nerves gripping her.

After some motivating words from her caddie, she steadied herself and sank a putt from 10 feet to hold a difficult par. That putt saw her win at 21 under to record the lowest 72-hole round ever in a men’s or women’s major.

Given her lead over countrywomen Sung Hyun Park and So Yeon Ryu, victory was effectively assured as Chun approached the 18th tee. But it looked like she might miss the record lowest score when her tee shot flew into the left rough.

After chatting to her caddie, she chose the safe option and used a wedge to chop her way onto the fairway, about 95 yards from the pin.

Then, Chun glided her ball over the water magnificently to give herself a shot at history. But the short walk to the green felt like an eternity.

“I was so nervous,” Chun said. “So my caddie David Jones told me ‘if you make the par, I buy the dinner.’ ”

Jones might regret it when he sees the bill.

“I can pick any expensive one,” said a smiling Chun, who broke the record of 20 under co-held by Henrik Stenson and Jason Day, and also bettered the women’s record by two.

She led from start to finish, although she did share the first-round lead with Park — who finished four shots back in a tie for second with Ryu.

Shanshan Feng, China’s only major winner, was six shots back in fourth place, with South Korean Sei Young Kim posting an impressive 65 to move up to fifth ahead of countrywoman I.K. Kim.

Chun finished the day with a 2-under 69, the most modest of her four rounds. Not that it took anything away from her achievement.

“I just cannot believe I won the Evian Championship and made 21 under par,” Chun said moments after her win as she clutched the trophy. “I’m not dreaming, right?”

Some difference from last year, when she missed the cut here at Evian Resort. In 2014 she tied for 65th.

Over four days of intensely accurate driving and clinical putting, she was near-faultless this time. Her only significant blemish was a double bogey on the ninth hole in the third round — and even then she limited the damage having opted for a two-stroke penalty.

There was one bogey on Sunday, on the 14th, but Chun made a birdie on the next to move back to 21 under and almost added another birdie on the 16th, with her attempt stopping just short.

Chun is only the second player in LPGA history to have her first two LPGA wins come at majors. The other was countrywoman Se Ri Pak in 1998.

After making her record-breaking putt, Chun raised both arms in the air.

“I think she’s an amazing ambassador for the women’s game,” said Lydia Ko, the defending Evian champion. “You can kind of see that from her personality.”

It was a tournament to forget for Ko.

Chasing her third major, the 19-year-old New Zealander finished in a tie for 43rd at 2 over.

She did enough, however, to win the third edition of the Rolex Annika Major Award — rewarding the player with the best combined record at all five majors and named after 10-time major winner Annika Sorenstam.

“For (Sorenstam) to be here and for her to be able to present the trophy to me makes it even more special,” Ko said.

Ko won the ANA Inspiration in April, where Chun was tied for second.

That tournament was Chun’s first start after a month out with a back injury caused in bizarre circumstances. She was struck by a hard-case suitcase that rival South Korean player Ha Na Jang’s father dropped down an escalator at the Singapore airport.

“I was struggling, between the injury and my body and psychological problems,” Chun said through a translator. “It was an inner struggle, and it was going around and around, so it was difficult for me to get out of that situation.”

The Senior British Open winner at Carnoustie in July for his first victory on the 50-and-over tour, Broadhurst made a 6-foot birdie putt on 18 after running his first attempt past the hole.

The 51-year-old Englishman finished with a 4-under 68 for a one-stroke victory over Bernhard Langer and playing partner Kevin Sutherland. Langer birdied the last for a 66, and Sutherland birdied the final two holes for a 70.

Broadhurst finished at 11-under 204 for two rounds at Pebble Beach and one at Poppy Hills. He won six times on the European Tour and played in the 1991 Ryder Cup.

The seniors played alongside boys and girls from The First Tee programs throughout the country.

Thompson finished with his second straight 7-under 64, birdieing five of the first seven holes on the back nine, for a three-stroke victory over Argentina’s Miguel Angel Carballo.

The series features the top 75 players from the Web.com money list, Nos. 126-200 in the PGA Tour’s FedEx Cup standings — Thompson was 145th, and Carballo 187th — and non-members such as Johnson with enough PGA Tour money to have placed in the top 200 in the FedEx Cup had they been eligible.

The top 25 players on the Web.com regular-season money list earned PGA Tour cards. They are competing against each other for Tour priority, with regular-season earnings counting in their totals.

Molinari completed a 7-under 64 in the rain-delayed third round and closed with a 65 to reach 22 under and become the first Italian to win a European Tour event twice. He also won the 2006 tournament at Castello di Tolcinasco. Willett, from England, shot 67-66.