Dustin Johnson was in trouble from the start Thursday, just not for very long. 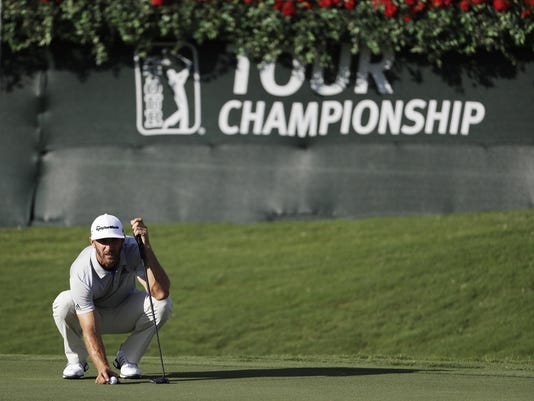 Atlanta — Dustin Johnson was in trouble from the start Thursday, just not for very long. The game feels easy for the U.S. Open champion, who began his bid for the FedEx Cup title on Thursday with a 4-under 66 to share the lead at the Tour Championship.

Johnson had 165 yards from the sand and worried about getting it over the lip of the bunker. He hit 8-iron to 2 feet for birdie and was on his way to his sixth consecutive round at 68 or lower.

“It was a very nice shot to start the day,” Johnson said with a smile.

Hideki Matsuyama of Japan ran off three straight birdies early in his round and finished with a birdie on the par-5 18th — the nines have been switched at East Lake — for a 66, while Kevin Chappell joined them with a bogey-free round.

Johnson is coming off his third victory of the year at the BMW Championship two weeks ago, and there was no indication that anything has changed. He hit a reasonable number of fairways (eight out of 14) considering the dry, fast conditions, and only once when he was out of position did he fail to save par.

He is the No. 1 seed in the FedEx Cup, and the top five seeds only have to win the Tour Championship to claim the $10 million FedEx Cup bonus. The top five were all among the dozen players who broke par in the opening round.

Jason Day, the world’s No. 1 player who hasn’t won in four months, dropped his only shot on the opening hole and was at 67, along with Kevin Kisner and Si Woo Kim.

“I’d like to give Dustin a good run for it,” Day said.

Jordan Spieth didn’t look like he would post anything near a 68 after he was 3 over through two holes. The defending FedEx Cup champion let his short game bail him out in a big way. Spieth holed three straight putts from the 30-foot range — one of them for par — and raced back into the mix on the back nine by holing a bunker shot for birdie right of the 13th green and finishing with a pair of 20-foot birdies.

“This is a course I feel very comfortable on,” Spieth said. “I feel if I play really solid golf here — and it doesn’t have to be perfect golf — I can shoot 8 under on this golf course. I have no doubt. It fits me really well.”

Also at 68 was Rory McIlroy, who had consecutive double bogeys toward the end of the front nine and pulled himself together with four straight birdies on the back. McIlroy had a 68 without making birdie on either of the par 5s.

That wasn’t the case for Phil Mickelson. He started his day by holing a 95-foot birdie putt. His fortunes turned on the par-5 sixth hole when his second shot went over the green and up against a fence, leading to bogey. He hit his next tee shot out of play and made triple bogey, and followed that with a double bogey with a drive into the water. Mickelson played 1 under from there to salvage a 74. He didn’t hit a fairway until the 17th hole, and then headed straight to the practice range.

These are the kind of days Johnson rarely has.

Johnson has finished out of the top 10 only twice in the last four months — one of them a missed cut at the PGA Championship out of nowhere — and is making it tough on everyone. While everyone has a mathematical chance of winning the FedEx Cup, that depends on how the top five fare.

And one of those is Johnson, who is faring quite well at the moment.

Chappell, three times a runner-up this year, would have to win and have Johnson finish worse than ninth to win the $10 million bonus.

“With the form Dustin is in, I don’t think that scenario is going to happen for me,” Chappell said. “But there’s a chance to win a golf tournament, and that’s all I’m really focused on.”

He’s not worried about the Ryder Cup either. Chappell said he hasn’t been contacted by U.S. captain Davis Love III, nor was he among three players not on the team who were invited to practice at Hazeltine over the weekend.

Of that trio, Justin Thomas opened with a 68.

Bubba Watson made two late bogeys from the rough and had a 72 to tie for 15th, while Daniel Berger shot 40 on the front nine and shot 74.

At Bad Griesbach, Germany, Austria’s Bernd Wiesberger had an eagle and nine birdies in an 8-under 63 to top the European Open leaderboard in the suspended first round.

Play started 3 hours, 25 minutes late because of fog, with many players unable to finish before dark.