Dustin Johnson is playing better than anyone in the world, and Kevin Chappell can’t wait to watch him. 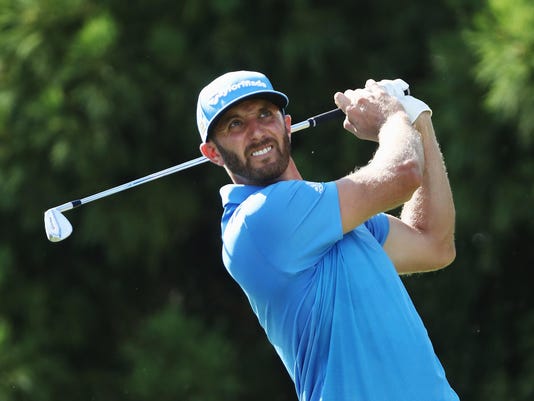 Atlanta — Dustin Johnson is playing better than anyone in the world, and Kevin Chappell can’t wait to watch him at the Tour Championship.

Even if that means having to beat him.

Johnson powered his way down the fairways and occasionally out of the brutal rough at East Lake on Friday for a 3-under 67, giving him a one-shot lead over Chappell and moving him one round closer to the $10 million FedEx Cup prize.

The U.S. Open champion is on a different level at the moment.

Even on a demanding test like East Lake this year — only 10 players remain under par — Johnson is hitting his driver long and straight. His wedge game has gone from a weakness to a strength. A new putter he put in play two weeks ago when he won the BMW Championship is giving him a better feel for alignment.

Small wonder that this was his seventh straight round at 68 or better during the FedEx Cup playoffs.

“The game is never easy. I wish it was,” Johnson said. “Obviously, I’m playing good right now. I’ve got a lot of confidence in my game. Every week, I feel like I bring the same game, which is nice. But I put in a lot of work to get to where I am.”

Chappell, one of two players at the Tour Championship who has yet to win on the PGA Tour, was just as solid, even if it doesn’t look as spectacular. He has made only one bogey in 36 holes, quite a feat on a course where the Bermuda rough is so punishing that balls sink to the ground and sometimes can’t be seen from a foot away.

He shot a 68 and will be in the final group of a playoff event for the second time this year.

Kevin Kisner (70) and Hideki Matsuyama (71) were four shots behind, while Rory McIlroy overcame another rough start on the front nine to post a 70. He was in the group five shots behind, which isn’t much of a deficit at the halfway point except for Johnson being the one they have to chase.

If nothing else, Johnson all but eliminated nearly everyone not among the top five seeds vying for the FedEx Cup. McIlroy is No. 6 and still has a chance, though he would have to win the Tour Championship and Johnson would have to finish third.

“I need to win, and I just need someone to play as good as Dustin this week,” McIlroy said.

Jason Day is out of the picture. The world’s No. 1 player withdrew in the middle of a round for the second straight tournament, citing the same nagging back issues that he hopes will be cured by rest.

But there is still work ahead of him, and that starts with Chappell.

Chappell has been a runner-up three times this season and keeps running into the wrong guys — Kisner at Sea Island, Day at Bay Hill and The Players Championship. He also was in the mix at the TPC Boston until McIlroy pulled away.

“It seems I like going against the hot player at the time,” he said.

Russell Knox matched the low score of the tournament with a 66 that allowed him to get back under par at 1-under 139, along with Justin Thomas, who is still hopeful of a Ryder Cup pick at the end of the week.

Thomas lost a shot when his ball moved right as he set his putter down behind a short par putt on the 11th hole. The PGA Tour reviewed it on videotape and gave him a one-shot penalty under Rule 18-2, the same penalty applied to Johnson at Oakmont in the U.S. Open.

Thomas disagreed with, but accepted, the penalty. His argument was it was not a flat surface and the greens were running fast.

“It’s nothing against the rules officials. It’s a god-awful rule,” Thomas said. “It’s very fortunate it didn’t cost Dustin a major championship. I hope it doesn’t cost me anything. I don’t feel like I did anything wrong.”

Mark Russell, the vice president of rules and competition for the tour, said, the wind was light and the ball had been at rest “for quite some time.”

“And the moment that Justin put his club behind the ball and addressed the ball, the ball moved,” he said. “In that situation, the evidence is against the player and he was penalized.”

That left him six shots behind Johnson instead of five. Either way, it’s a tall order for Thomas or anyone to catch Johnson.

At Columbus, Ohio, Tag Ridings shot a 6-under 65 for a share of the second-round lead with Martin Flores in the Web.com Tour Finals’ Nationwide Children’s Hospital Championship.

The 42-year-old Ridings was 52nd on the Web.com Tour regular-season money list and entered the third of four series events 36th in the race for 25 PGA Tour cards with $9,493.

Flores bogeyed the final hole for a 66 to match Ridings at 8-under 134 on Ohio State’s Scarlet Course. Already guaranteed a PGA Tour card with a fifth-place finish on the Web.com money list, the 34-year-old Flores won the Lincoln Land Charity Championship in July for his first Web.com Tour title.

The series features the top 75 players from the Web.com regular-season money list, Nos. 126-200 in the PGA Tour’s FedEx Cup standings and non-members with enough PGA Tour money to have placed in the top 200 in the FedEx Cup had they been eligible.

Flores and the other top-25 finishers on the Web.com money list earned PGA Tour cards. They are competing against each other for tour priority, with regular-season earnings counting in their totals.

Two-time heart transplant recipient Erik Compton was tied for third at 6 under after a 69. He was 173rd in the FedEx Cup standings and is 63rd among the players vying for the 25 cards with $4,000.

At Victoria, British Columbia, Scott McCarron birdied five of the first six holes and finished with an 8-under 62 to take the first-round lead in the Pacific Links Bear Mountain Championship.

McCarron won the Principal Charity Classic in June in Iowa for his first victory on the 50-and-over tour after winning three times on the PGA Tour.

Doug Garwood and Jerry Smith were tied for second at 64. Garwood played the back nine in 6-under 30, and Smith had eight birdies and a bogey.

Woody Austin and Jeff Sluman shot 65, and Olin Browne and Wes Short Jr. followed at 66. Austin has three victories this year. Hall of Famers Vijay Singh and Colin Montgomerie topped the group at 67.

At Bad Griesbach, Germany, Frenchman Alexander Levy broke the course record and opened a six-stroke lead in the suspended second round of the European Open.

Levy completed a 9-under 62 in the morning in the delayed first round and was 17 under with one hole left when the second round was play was stopped because of darkness.

Germany’s Martin Kaymer, Sweden’s Robert Karlsson and England’s Ross Fisher were 11 under. Kaymer had a hole left, and Karlsson and Fisher had three to go.