Bernhard Langer knew it wouldn’t be easy to come from one stroke back to beat Vijay Singh. 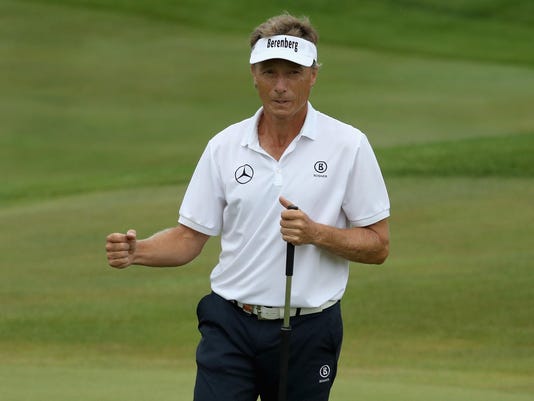 Bernhard Langer celebrates after putting during the final round of the Senior PGA Championship.(Photo: Rob Carr / Getty Images)

Sterling, Va. — Bernhard Langer knew it wouldn’t be easy to come from one stroke back to beat Vijay Singh, who’s five years younger, drives the ball 30 yards farther and routinely competes with players young enough to be his sons.

Ultimately, the 59-year-old German star’s confidence with the putter, a club that has frequently bedeviled him, was the difference as he edged past Singh in a tense back-nine duel to win the Senior PGA Championship at Trump National on Sunday.

Langer won his record ninth senior major and the only one that had eluded him during his dominant decade-long run on the 50-and-over circuit. He tied Jack Nicklaus’ record of eight majors last week with a comeback victory in the Regions Tradition. He’s also the first player to win the career “super slam” of all five senior majors.

Despite a few dozen protesters, the drama remained on the course at President Donald Trump’s club on the shores of the Potomac River, about 25 miles outside Washington. Trump, coming off a nine-day trip abroad, did not attend the final round.

Langer pulled ahead of Singh with 12-foot birdie on the par-4 16th. Singh three-putted 17 to give Langer a two-shot advantage. After Singh birdied 18, Langer calmly tapped in for par and a one-shot victory, embracing his daughter, who flew in from Seattle to surprise him, on the 18th green.

“I think what really frustrated him was my putting,” Langer said. “I made a bunch of putts just to keep in touch and he didn’t really make anything.”

Langer knows what that feels like, having struggled with the putting yips off and on throughout his career. Langer’s latest challenge came at the beginning of last season, when golf’s governing bodies banned the anchored putting stroke he had used for more than a decade. Langer continued using the long putter, moving his top hand an inch away from his chest.

“I found a way now that I feel reasonably comfortable most of the time, not always,” Langer said. “It’s encouraging for me to see that even under pressure I can make some putts.”

The final pairing teed off amid steady rain and the weather appeared to bother Singh, who rushed his pre-shot routine. Langer, implacable as ever, birdied the par-5 third and the par-4 fifth to move one shot ahead.

Langer made his only bogey of the day on No. 6, and the two remained tied for the next nine holes as the rain tapered off and the wind picked up, blowing from a different direction than it had the rest of the week.

Singh tried to overpower Trump National as he had the first three days, but Langer used his guile to maintain a share of the lead. On the short par-4 ninth, Singh drove the green and had 7 feet for eagle. Langer, unable to reach the green with a driver, hit a hybrid off the tee. His approach shot spun back to 20 feet, but he buried the putt and raised his fist in the air. Singh then missed the eagle putt and stood frozen in disbelief.

Singh’s unease grew throughout the afternoon. He practiced his full swing with his putter on the side of the sixth green and rehearsed his putting stroke on several tee boxes. On 12, after hooking his second consecutive tee shot into the rough, he took out his frustration on some tall grass, taking four hard practice swings.

Langer missed just two fairways and one green in regulation, and he led the field for the week in both categories. His accuracy and persistence finally paid off on 16. Singh missed another fairway and two-putted for par. Langer hit 6-iron to 12 feet and his birdie putt was so pure that he started his fist pump before it dropped.

“I missed a lot of putts out there. If I would have putted nicely, this thing probably would have been over a long time ago,” Singh said. “But Bernhard played really solid. He never missed a shot and he was always on the green and he putted nicely as well, so he deserved to win.”

No one else posed much of a threat. Billy Andrade twice pulled within two shots of the lead but faded on the back nine. He shot 71 and finished five shots back, tied for third with Miguel Angel Jimenez, who closed with a 68. Scott McCarron and Bob Estes tied for fifth.

The 54-year-old Singh still plays a full PGA Tour schedule and was playing in his first Senior PGA, which is the oldest of the five senior majors.

Langer had four previous top-five finishes in the championship, his best chance coming in his first attempt. He led after three rounds in difficult conditions at Oak Hill in 2008, but shot a final-round 76 to lose by one stroke to Jay Haas.

Langer has three straight wins in the Senior Players Championship and two straight at the Regions Tradition, along with two Senior British Opens and one U.S. Senior Open.

“It means a great deal to win two majors at age 59,” Langer said. “And to surpass Jack’s record of eight majors out here is pretty neat. I’m a good friend of Jack’s and I think very highly of him, and whenever you can do something just similar or close to what he’s achieved, you’ve done something pretty special.”

At Fort Worth, Texas, Kevin Kisner birdied the first three holes on the back nine to take the lead and held on to win the Dean & DeLuca Invitational at Colonial after defending champion Jordan Spieth’s Sunday charge.

Kisner shot a 4-under 66 to finish at 10-under 270, including a clutch par save on the 18th hole after a wayward tee shot and an approach that was off the back side of the green and well below the hole. He finished a stroke ahead of Spieth, Sean O’Hair and Jon Rahm.

Spieth shot a bogey-free 65, and was standing on a chair to see over the crowd at the 18th green when Kisner putted up the mound to 5 feet of the cup and then made the winning putt. That came right after Rahm’s 10-foot birdie chance skirted just to the left of the hole.

The 33-year-old Kisner won his second PGA Tour title in 148 starts. He was a runner-up twice this year, and six times over the past three seasons.

Spieth, who had missed consecutive cuts at The Players Championship and the AT&T Byron Nelson, was trying to become the only player other than Ben Hogan to win consecutive Colonials. Hogan won five times, including the first two in 1946 and 1947, along with consecutive wins again in 1952 and 1953.

At Virginia Water, England, Alex Noren shot a 10-under 62 for a two-stroke victory in the BMW PGA Championship at Wentworth.

Seven strokes back entering the round, the Swede made six birdies and holed a 6-foot eagle putt on the No. 18 to complete what he described as “probably the best round of my life.”

It set the clubhouse target of 11-under 277, and Noren had to wait more than two hours to see if the lead would hold up in the European Tour’s signature event. The 62 established a course record on the revamped West Course, though Thomas Bjorn also shot a 62 in 2014.

No one got within a shot of him, with Henrik Stenson, Branden Grace, Shane Lowry and Hideto Tanihara among the chasers falling away as rain arrived late in the afternoon. Francesco Molinari was second after a 68, with Stenson (68), Tanihara (68) and Nicolas Colsaerts (65) another shot back.

Noren won for the ninth time on the European Tour, with four of the victories coming in a 10-event stretch last July-November.