Defending champion Brooke Henderson matched the 3-under start, which left her two back of Chella Choi and Amy Yang. 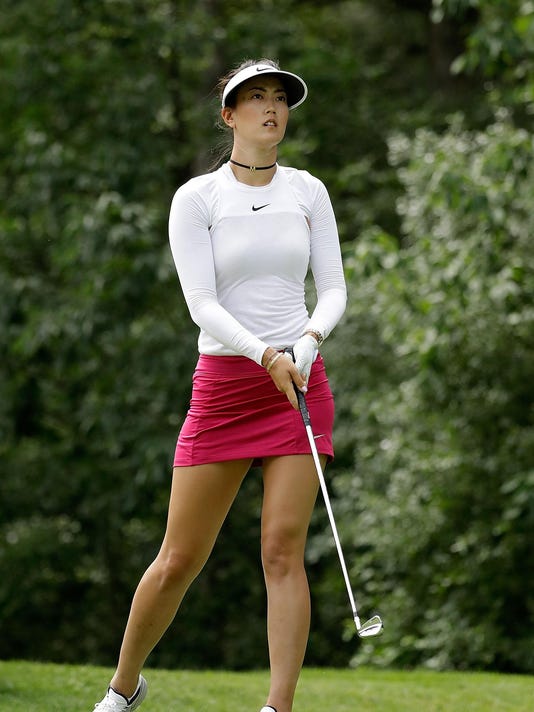 Olympia Fields, Ill. — Michelle Wie launched a 3-wood into swirling gusts and toward the 18th green, wondering if the shot had enough steam to get there. A shift in the wind took the guesswork out of the equation.

“It died down and I got a little surprise,” Wie said. “I got all the way there.”

The 215-yard shot rolled within 30 feet of the flag to set up a two-putt birdie and a 3-under 68 that left Wie two shots off the lead during the opening round Thursday in the KPMG Women’s PGA Championship. She wasn’t the only long-hitter to benefit from windy conditions and a tough front nine at Olympia Fields Country Club.

Defending champion Brooke Henderson matched the 3-under start, which left her two back of Chella Choi and Amy Yang. Choi shot a 66 in the morning, and Yang was on the 18th hole at 5 under with a chance to grab the outright lead when play was suspended at 7:01 p.m. because of dangerous weather in the area.

Brittany Altomare shot a 67, and Joanna Klatten also was 4 under with two holes left.

Joining Henderson and Wie at 68 were Alison Lee and Su Oh. Kim Kaufman and Emily Pedersen also were 3 under late in their rounds.

“I was able to carry a couple of fairway bunkers, which is huge, because not a lot of players are able to do that,” Henderson said.

The second major on the women’s tour is again being played at the site of previous men’s majors, where big tee shots can pay big dividends. Henderson won her first major at Sahalee last year, and Wie claimed her only major — the 2014 U.S. Women’s Open — at Pinehurst.

Praise for Olympia Fields, a tree-lined classic layout just south of Chicago, is nearly unanimous. But it’s being tempered by players struggling to navigate the changing wind, with gusts up to 16 mph. Oh called that a “massive” factor in her decision-making.

“We kind of anticipated it,” she said. “It’s the ‘Windy City.’ But it was like this from the very beginning and I stayed patient out there.”

The Women’s PGA marks the start of a stretch of three majors in six weeks, which should provide some clarity at the top of the game.

So Yeon Ryu, who beat Lexi Thompson in a playoff at the ANA Inspiration to claim the season’s first major, also took over the No. 1 spot this week after becoming the only repeat winner through the first 16 tournaments on the LPGA Tour. Ryu finished at 69, and Thompson at 70. Two-time major winner Lydia Ko also shot 70.

Ariya Jutanugarn, who slipped to No. 2 in the rankings after Ryu’s win last week in Arkansas, struggled to a 77, and Cristie Kerr shot 78.

The forecast for Friday calls for rain and slightly increasing wind. That could make things tougher for both Choi and Henderson, whose caddies are, respectively, their father and older sister.

When Choi was asked whether she could blame any bad shots on her caddie’s calculations, she smiled and said, “Sometimes.”

She added: “My father missed a couple of shots today, but it happens because the wind is every time switching.”

At Peabody, Massachusetts, Kirk Triplett shot an 8-under 62 in the first round of the U.S. Senior Open to match the lowest round in a PGA Tour Champions major.

Triplett started on No. 10 and played his first nine holes in 4 under. After making the turn, he birdied two of the first three holes, eagled the 341-yard, par-4 fourth hole and closed with five pars. That left him one stroke ahead of Olin Browne, who left himself short on a 30-foot birdie putt on the final hole.

At Potomac, Maryland, David Lingmerth is one of a few players in the Quicken Loans National field with any experience to draw on at TPC Potomac — and it’s the best kind of experience.

Lingmerth won a Web.com Tour event on the tight, tricky layout near Washington in 2012. On Thursday, the Swede once again relied on his accuracy off the tee to shoot a 5-under 65 and take the first-round lead.

TPC Potomac is hosting the Quicken Loans National for the first time and has been extensively redesigned since it last welcomed the PGA Tour in 2006.

Troy Merritt, the winner two years ago at Robert Trent Jones Golf Club, was a stroke back along with Marc Leishman, Johnson Wagner, Sung Kang, Nick Taylor and Daniel Summerhays.

At Guyancourt, France, Paul Waring shot a 7-under 64 at the French Open to take a two-stroke lead in a first round in which the main attraction turned out being the antics of a competitor’s mother.

The 279th-ranked Waring rolled in seven birdies and was bogey-free on Le Golf National course that will stage the Ryder Cup next year. Nathan Kimsey, Alexander Bjork and Thomas Pieters were the nearest chasers after 66s.

Pieters managed to keep his focus down the stretch after being witness to a bizarre incident near the 11th hole that had players laughing.

The mother of 21-year-old Chinese player Li Haotong rolled up her white shorts and waded into some muddy water to recover a putter that had been discarded by her son in frustration after a bogey on No. 11 about 20 minutes earlier. She collected the club and slowly returned with it to dry land, only to throw it back into the water because it had been snapped in half by Li.

Pieters found it so funny that he fell to the ground and rolled onto his side, but he regained his composure to make birdie on the next three holes.

Tommy Fleetwood carried over his form from the U.S. Open by shooting 67 to lie three shots back.

Fleetwood was fourth at Erin Hills two weeks ago for his best finish in a major, and backed that up by tying for sixth at the BMW International Open in Germany last week.

Jon Rahm took a break from playing on the PGA Tour to make a rare appearance in Europe, and the 11th-ranked Spaniard shot 70.

Li played the final seven holes of his round using a sand wedge as a putter, even managing a birdie on No. 14. He shot an even-par 71.

Three qualifying places for the British Open are on offer for players who finish in the top 10 and are not exempt. Waring and Pieters are among those already assured a place at Royal Birkdale next month.