Women professional golfers aren’t quite sure what the big deal is about the sport’s new dress code. 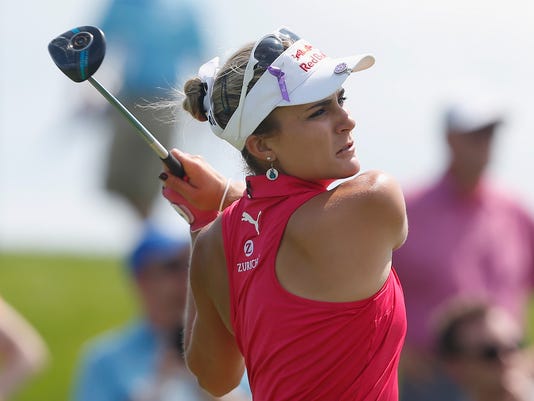 Racerback tops are acceptable if they have collars, like this one worn by Lexi Thompson.(Photo: Matt Sullivan, Getty Images)

Sylvania, Ohio — Women professional golfers here this week for the LPGA tournament at Highland Meadows Golf Club, just outside Toledo, aren’t quite sure what the big deal is about the sport’s new dress code in effect beginning with this event.

The LPGA no longer allows: plunging necklines, skirts, skorts or shorts that do not “sufficiently cover a player’s bottom area,” racerbacks without a mock or regular collar, joggers, and leggings, unless they are worn under a skort or shorts. A golfer who violates the rules will be fined $1,000 for a first offense, and then it will double for a second offense, and so on.

At the Buckeye Brand Celebrity Pro-Am on Wednesday in advance of this week’s Marathon Classic, several LPGA golfers basically said, “No story here. Moving on.”

“There’s very minimal change to what our previous dress code is, so I don’t know what people are making the hoopla about,” golfer Christina Kim said.

“It’s a non-issue in my opinion. Without dress codes there would never have been a ‘Casual Friday’ term coined. It’s very simple. It’s just, dress professionally. We’re a professional sports organization.

“There were some people that were not abiding by our dress code. The vernacular was tidied up a bit. It didn’t specify certain things before. It was a matter of clarification with everyone.”

Stacy Lewis mentioned that the NFL and NBA have dress codes, and she pointed out college football teams that arrive to games wearing suits or uniform sweat clothes. She wondered why the fact that most work places have clothing guidelines is acceptable, yet the LPGA’s latest rules have been so scrutinized.

Lewis also doesn’t see the rules as being vastly different than before.

Jaye Marie Green wore white shorts with embroidered lemons during her Pro-Am round. She said she appreciates that the rules are more clear, but they still don’t specify exact skirt length.

“I’m going to think twice when I put on a skirt now, that’s for sure,” she said. “They say if you’re questioning what you’re wearing just ask them if this is good.”

It’s hard to say exactly what triggered the rules change. There is a players’ board that had been discussing clothing issues for some time.

“It kind of came out of nowhere,” golfer Lexi Thompson said. “Maybe a few of the girls wore some yoga pants. I don’t really wear that kind of stuff. I have a few racer-back shirts but with collars. We’ll see what it does, but we have to abide by it. Golf is a very professional sport. It’s important to look professional.”

Collarless racer-back tops were deemed inappropriate because they expose more of the back and a bit more in front.

“That’s a lot of flesh,” Kim said. “When we’re out here and the future of women’s golf and the future of all generations down the line, are young children now. There’s nothing wrong with trying to dress professionally. I don’t think sexualizing women is the right move for kids to see. We want kids to be out here and feel comfortable and be able to play golf in a setting that is appropriate.

“I don’t think it’s wrong telling someone you can’t show butt cheek. I can express myself with my clothing. I don’t need less material to express who I am. I am who I am.”

Lewis believes her fellow golfers need to be more aware of their sponsors.

“All these players are a representation of Marathon this week, so if Marathon is not happy with the way someone is dressed, we have to address it,” she said. “People are in shape and they want to show that off, which I think you should, but I think there has to be a line drawn somewhere.”

She takes a hard line with those who violate the rules.

“I think if you show up in something that’s not appropriate you shouldn’t be able to play. Not just a fine,” Lewis said.

Like Lewis, Kim believes the rules are black and white.

“We should be respected for the merits of our golf game.”

Lewis simply thinks the game should be responsible and be professional across the board, including with what they wear.

“People are watching us and women’s golf fashion is based off of us,” she said. “What kids are wearing — I wouldn’t want my daughter to be wearing these short shorts. There’s a lot of people watching us and basing what they wear on what we wear.

“They’re not (rules) changes that, you’re not going to see somebody that wore really short skorts come out in pants and a long-sleeve top. It’s not these extreme changes. Maybe the skirt is an inch longer or the top has a collar instead of not having a collar. It’s very minimal.”

While the changes might be minimal, there seems to be more clarity. Green once said she wore a workout tank top to a tournament because she saw another player wearing one and thought it was OK. She was told otherwise.

Green also said she appreciates the LPGA is looking out for the golfers.

“When we bend over, I don’t know what someone could see because I can’t see behind me,” she said. “I think it helps protect a player’s image. I wouldn’t want to be someone bending over and you can see right up my skirt.”

Bottom line, professional golfers understand they can dress with some flare and bright colors, but certain items the LPGA considers overly casual do not make the cut.

“I’m not saying we have to sit there in petticoats to look professional,” Kim said. “But that’s all it comes down to – looking professional and looking presentable.”

■Plunging necklines are not allowed.

■Leggings, unless under a skort or shorts, are not allowed.

■Length of skirt, skort and shorts must be long enough to not see your bottom area (even if covered by under shorts) at any time, standing or bent over.

■Appropriate attire should be worn to Pro-Am parties. You should be dressing yourself to present a professional image. Unless otherwise told “no,” golf clothes are acceptable. Dressy jeans are allowed, but cut-offs or jeans with holes are not allowed.

■Workout gear and jeans (all colors) are not allowed inside the ropes.

■Joggers are not allowed

Notable: Lydia Ko has not won since the Marathan Classic a year ago. … Sung Hyun Park, who won the U.S. Women’s Open last week, is in the field. She is the only major champion playing this week as So Yeon Ryu (ANA Inspiration) and Danielle Kang (KPMG Women’s PGA Championship) are taking the week off. … The field also includes Lexi Thompson, Brooke Henderson and Stacy Lewis.