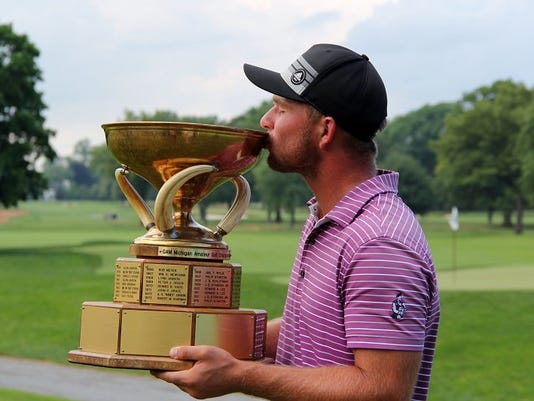 After finishing runner-up in the Michigan Amateur Championship last year, Breault broke through and bested Shelby Township's Anthony Sorentino, 4-and-3, in the championship match Saturday at the Country Club of Detroit.

“I proved to myself I could do it last year,” said Breault, of Hartland. “Then this year I just said, ‘You know let’s must make it to match play and then anything can happen. Let’s get it done this year.’”

Breault took a 1-up lead over Sorentino at the fifth hole in the final match and never looked back. He won three of the next four holes with two birdies and a par to build a commanding four-hole cushion en route to his first title.

Breault became the eighth golfer in the 107-year history of the tournament to win the event after placing second the year before and first since PGA Tour player Ryan Brehm pulled it off in 2007.

"I was laser-focused all day," said Breault, who will be a senior at Eastern in the fall. "I didn’t think about anything about after the tournament because I didn’t want to get ahead of myself. I just tried to stay focused, hit smart shots and stay in the moment.

"And now it is finally starting to hit me. I just won. This is awesome."