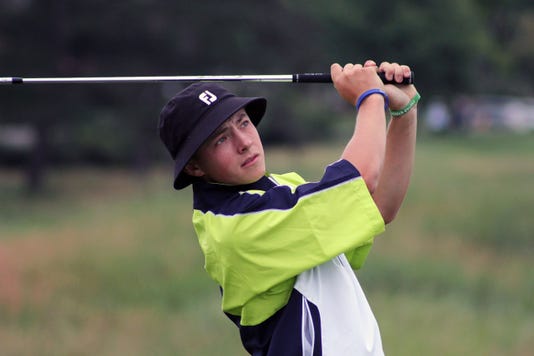 James Piot of Canton and Michigan State finished 10-under 203 to win the GAM championship Tuesday at Meadowbrook Country Club.(Photo: Golf Association of Michigan)

James Piot of Canton closed 2-under 69 to finish with a three-stroke lead, winning the 97th GAM Championship at Meadowbrook Country Club Tuesday.

The Michigan State golfer's 10-under 203 total aided greatly by a pair of 67s on 36-hole Day 1 on Monday, left him three shots ahead of defending champion Alex Scott of Traverse City and Grand Valley State University, who shot 69 for 206.

“It’s definitely the best I’ve scored this year by far,” said Piot, who was Big Ten Freshman of the Year last year for the Spartans. “The course fits me really well. It put any stress on the greens only. Off the tee, you can pretty much bomb it, and I had a lot of wedges in my hands and put my ball in good spots for birdie chances the whole tournament. I made the most out of it, too.”

Michael Anderson of Northville, who was one of Piot’s high school coaches, shot 72 for 208. Also at 208 was Mitchell White of Muskegon, the 2015 champion and also a Grand Valley golfer who shot 68 to close.

Piot also bested one of his Michigan State coaches. Dan Ellis, an MSU assistant golf coach, shot 69 for 209 to round out the top five. Brad Bastion of Clinton Township shot 70, and Henry Do of Canton, the 2014 Michigan Amateur champion, shot 69. They finished at 210.

Piot, who started every tournament for the Spartans last year, is seeking his first college win, though he did have two several top 20 finishes, including two top 10s. The win Tuesday was his first GAM championship since winning the 2015 Michigan Junior State Amateur.

“It was a goal to get a win in Michigan this summer,” he said. “It helps a lot to see a run of red numbers before summer ends and build confidence going into the college season.”