Long closed with a 7-under 65 on the Stadium Course 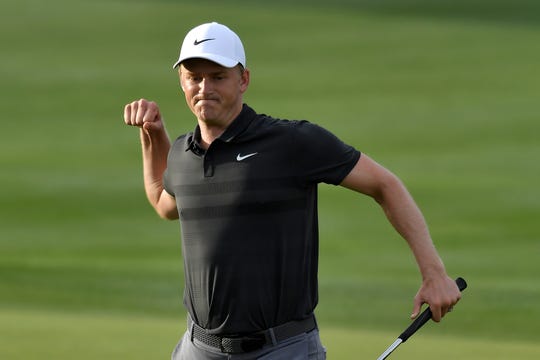 Adam Long celebrates after making the winning putt on the 18th green Sunday during the final round of the Desert Classic at the Stadium Course in La Quinta, Calif. (Photo: Donald Miralle, Getty Images)

Long won the Desert Classic on Sunday at PGA West, beating Hall of Famer Phil Mickelson and Adam Hadwin by a stroke with a 14-foot birdie putt on the final hole after a 6-iron approach from an awkward stance.

“In some ways it’s been a little bit of a roller-coaster, but it’s been a steady improvement throughout my career,” Long said. “I’ve played in pretty much most tours around the world that there are and just kind of steadily progressed.

“It kind of can seem like it came out of nowhere, but my game’s been trending in the right direction for really the last two years now.”

Long closed with a 7-under 65 on the Stadium Course, holing the winning putt after Mickelson’s 40-foot birdie try curled left at the end.

“I got a pretty good read off Phil’s putt,” Long said. “It was one of those putts that you just stand over you just know you’re going to make. And you can’t control that, but when you have that feeling it’s a good one. I’m in pretty disbelief right now. I don’t really know what happened.”

Mickelson, the leader after each of the first three rounds, shot 69.

“I had a terrible putting day — one of the worst I can recall in a while,” Mickelson said. “Started right on the first hole with a little 4-footer uphill and three-putting that green. And I missed a bunch of short ones on the front and some birdie opportunities, but it felt awful with the putter. I hit a lot of good shots today, but just couldn’t get the ball to go in the hole.”

Long set up with the winning putt with the 6-iron approach from 175 yards with the ball below his feet in dormant grass on a mound to the right of the fairway.

The 31-year-old former Duke player earned his PGA Tour card with a 13th-place finish last year on the Web.com Tour’s regular-season money list. In five previous PGA Tour starts, he had made only one cut – a tie for 63rd in October in the Safeway Open.

Hadwin finished with a 67, losing a three-stroke lead on the back nine.

“It’s golf,” Hadwin said. “I made a bunch of putts all week and then honestly I was kind of battling it a little bit swing-wise, didn’t quite have it like I did the first three days. … It just kind of flat-lined on me there in the last few.”

The Canadian had his fourth straight top-six finish in the event. He was second in 2017 after a third-round 59 at La Quinta Country Club and tied for third last year.

“Those chip-ins were huge and some putts on the front nine as well to just kind of hang in there,” Long said,

He opened with a 63 on PGA West’s Nicklaus Tournament Course, shot 71 on Friday at the Stadium layout and had another 63 on Saturday at La Quinta to get into the final group with Mickelson and Hadwin.

“It was a huge thrill to play with Phil,” Long said. “I looked up to him my whole life and big fan of his and he couldn’t have been greater to me out there and he was awesome to play with, a lot of fun.”

The 48-year-old Mickelson was making his first tour start since the Safeway and first competitive appearance since beating Tiger Woods in Las Vegas in November in a made-for-TV event.

Mickelson entered the day two strokes ahead of Hadwin and three ahead of Long. The tournament winner in 2002 and 2004, Lefty matched his career-low score with an opening 60 at La Quinta.

“It’s a weird game how sometimes if you haven’t played for a while it just can click and come right back,” Mickelson said. “But usually you need a little bit of a foundation there coming down the stretch. When you get to feel the pressure you need to have that foundation of practice and seeing the shots that you want to hit, seeing the ball go in on the greens and so forth and I didn’t really have that today.”

Top-ranked Justin Rose closed with a 70 to tie for 34th at 14 under. He’s the first No. 1 player to play the tournament since the world ranking began in 1986.

Eun-Hee Ji of South Korea outlasted the cold and wind to close with a 1-under 70 and win the Diamond Resorts Tournament of Champions by two shots in the LPGA Tour season opener.

Ji shared the 54-hole lead with Lydia Ko, who fell apart on the back nine at Tranquilo Golf Club at Four Seasons. Ko was one shot behind when she made double bogey on the par-5 13th and wound up shooting 42 on the back nine for a closing 77.

Stacy Lewis, in her first competition as a mother, shot 70 and tied for sixth.

The LPGA opener was limited to winners over the last two seasons. It also included a celebrity field of athletes and entertainers who competed for a $500,000 purse using the modified Stableford scoring system. Former Atlanta Braves pitcher John Smoltz had 33 points in the final round for a three-point victory over former pitcher Mark Mulder.

Alvaro Ortiz of Mexico finally earned his trip to the Masters by delivering clutch moments on the back nine to close with a 6-under 66 and win the Latin American Amateur Championship.

Ortiz, runner-up the last two years, was tied with Luis Gagne of Costa Rica with two holes to play on the Teeth of the Dog course at Casa de Campo. Gagne made bogey on the 295-yard 17th hole by hitting out of a fairway bunker and over the green. Ortiz, playing in the final group behind him, hit wedge into tap-in range for birdie and a two-shot lead.

The victory gets Ortiz into the Masters, along with the final stage of qualifying for the U.S. Open and British Open.

Jazz Janewattananond closed with a 6-under 65 to win the Singapore Open and qualify for the British Open.

The Thai player carded seven birdies over the Serapong Course at Sentosa Golf Club to finish at 18-under 266, two strokes ahead of Yoshinori Fujimoto (68) and Paul Casey (65), who had already secured his place at Royal Portrush. Fujimoto also qualified for the British Open.