Littler rallied from three shots behind in the final round at Oakland Hills to win the U.S. Open for his only professional major. 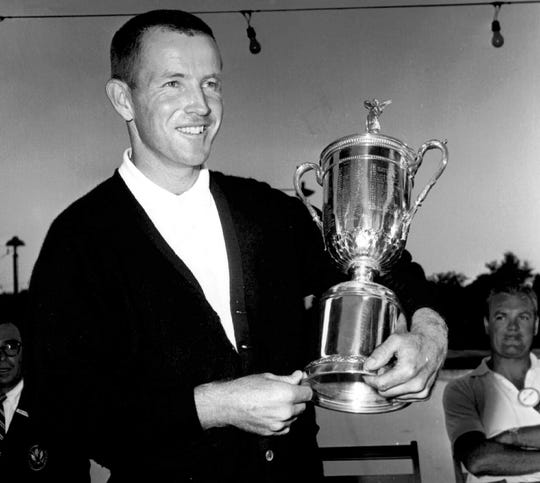 In this June 17, 1961, file photo, Gene Littler holds the trophy after winning the U.S. Open golf tournament at Oakland Hills in Birmingham. Littler, whose fluid swing carried him to 29 victories on the PGA Tour and a U.S. Open title, died Friday night with his family at his side. He was 88. (Photo: AP)

San Diego — Gene Littler, whose fluid swing carried him to 29 victories on the PGA Tour and a U.S. Open title at Oakland Hills, has died.

Littler died Friday night with his family at his side, son Curt Litter said Saturday. He was 88.

Littler held his own among the golfing greats to emerge from San Diego with a tempo to his swing that made the game look easy. Gene Sarazen once said Littler had a perfect swing, like Sam Snead, “only better.”

Mickey Wright, asked in 2011 for the best swing she ever saw, mentioned Ben Hogan before quickly adding, “I had my favorites, like Gene Littler, whom I just loved.”

He was known as “Gene the Machine,” and he won the first of his tour titles in the 1954 San Diego Open while still an amateur. He won the 1955 Los Angeles Open for his first pro victory and went on to win three more times that year.

A testament to the quality of his swing was that Littler had a malignant tumor removed from the lymph glands under his left arm in 1972 when he was 42, and he won four more times. Little won three times at age 45 in 1975.

“His rhythmic swing that earned him his distinctive nickname remains in our minds a thing of beauty,” PGA Tour Commissioner Jay Monahan said. “It was a pleasure to watch Gene Littler hit a golf ball. San Diego has produced great champions like Billy Casper, Phil Mickelson and Mickey Wright. Gene Littler stood there right there beside those giants of the game.”

Littler was born July 21, 1930, in San Diego and grew up at La Jolla Country Club. He joined the Navy in 1951 and while in the service, won his first major title in the 1953 U.S. Amateur in Oklahoma City. A month after winning the San Diego Open, he turned pro and finished one shot behind Ed Furgol in the U.S. Open at Baltusrol.

His most productive year was in 1959 when Littler won five times, was runner-up three times and finished No. 2 on the PGA Tour money list behind Art Wall.

Two years later, Littler rallied from three shots behind in the final round at Oakland Hills to win the U.S. Open. That was his only professional major, though he nearly won the 1977 PGA Championship at Pebble Beach until losing to Lanny Wadkins in the first sudden-death playoff in a major.

Even so, Littler felt his 1973 title at the St. Louis Children’s Hospital Open was as big as any. It was his first victory since recovering from cancer.

“I was ecstatic after winning the Open, of course,” he once said. “But I was absolutely overcome by winning in St. Louis. I realized I was the only player who had ever come back from that kind of surgery.”

Littler played on six Ryder Cup teams, all U.S. victories, compiling a 14-5-8 record. He was inducted into the World Golf Hall of Fame in 1990 and in 1973 received the Bob Jones Award, the highest honor by the U.S. Golf Association that recognizes distinguished sportsmanship in golf.

“I worked on tempo a lot, and I think my tempo was really pretty good,” Littler once said. “I think maybe that’s what gives the impression of a terrific swing. I don’t know if mechanically it was that sound or not, but it must have been OK.”

Littler didn’t have as much fanfare, and liked it that way. Curt Littler said his father had “an amazing sense of humor,” which he often displayed as he reached his 60s and 70s, and someone would ask if he was Gene Littler. “I used to be,” he would tell them with a wry grin.

Littler is survived by his wife of 68 years, Shirley, son Curt and daughter Suzanne.